Tomorrow is Cabernet Day!  But tonight I’m not drinking a Cab.  For two reasons – Cab is not a favorite varietal of mine, and we are still working on the bottle that Jon opened last night.  It’s a red, at least, a blend, but it doesn’t even have any Cab in it.  I doubt I will drink Cabernet tomorrow either.  I’m a terrible follower of Cabernet Day, apparently…

Tonight, I’m drinking the 2008 Michael Florentino Miscolato Red Blend.  Michael Florentino is a small, boutique winery with a tasting room in the warehouse wine district in Woodinville – the first vintage was 2007.  They make wine with several grapes that are not frequently seen in this area, both as blended wines and single varietals.  Their approach is to create fruit forward wines with balanced tannins and light spice.  Right up my alley! 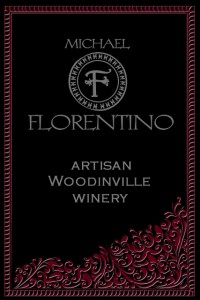 The Miscolato is blended with two thirds Grenache and the balance a mixture of Tempranillo, Syrah and Counoise.  It is a rich Bing Cherry color, and on the nose you get heavy aromas of earth and smoke (I didn’t really pick up any fruit on this one).  When you taste it, you get the same flavors of earth, smoke and a little spice, but it is balanced with the flavor of plums and black raspberry.  This wine packs a punch at 14.6% alcohol, but you don’t feel overwhelmed by the alcohol when you are drinking it.  I had mine after dinner, and the tannins are light enough and well balanced so you can drink it without food.

This was our only bottle, purchased at the 2013 Anacortes Wine Festival, but if you find your way down to Woodinville, they are certainly worth a visit.  Although sadly, you might not find the 2008 Miscolato, as they only produced 112 cases and I think they are already sold out.  But they have a Cabernet!

The recent days of sunny weather put Jon in the mood for more Rosé, so we opened up a bottle of Syncline Wine Cellars 2010 Rosé.  Syncline is a small family owned winery in Lyle, Washington, on the Washington side of the Columbia River, right along the border with Oregon.  We had stopped there for a visit on our 2012 President’s Day Weekend Wine Tour.  For more information on that visit…

The Syncline Wine Cellars owner and winemaker tends toward the science of winemaking, and it is apparent when you read the tasting notes on their website.  It is made in the Saignée style, where the skins remain on the grape for a short period of time to impart some color, but the juice (the must) is drained off before it darkens to the color of a red wine.  Syncline uses a different blend for their Rosé each year, sampling some of the best grapes of the year from around the region.  This year they sourced their fruit from the Columbia River Gorge (Pinot), Horse Heaven Hills (Grenache and Mourvedre), and McKinley Springs (Grenache, Cinsault, Couniose and Carignan).  And throw in a bit of Red Mountain for good measure.

The 2010 Syncline Rosé is a blend of 33% Pinot Nor, 17% Grenache, 17% Cinsault, 15% Carignan, 9% Mourvedre, and 9% Counoise.  Other than the Pinot Noir, these are all relatively rare grape varieties, and all ones that I have really enjoyed in other wines.  This blend  has a melon nose, with bit of grapefruit.  It is a dry wine which has a brief taste of strawberry, but a lingering taste of honeydew and grapefruit.  It has a very dry finish. Jon announced that it is one of the more complex Rosés he has tried.  On a hot day, this wine will really hit the spot.  I recommend it for when you are in the mood for a dry Rosé.