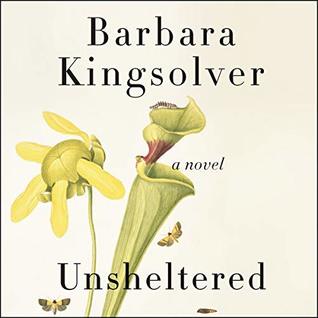 A few months ago it seemed that things were looking brighter.  The economy was opening up.  The lock downs were over.  Summer was starting.  I ended the COVID Diaries because it seemed that we could finally move on.  Tonight I am revisiting.

I’ve been staring at a blank page for a few days, trying to find the words.  And not finding them.  Not finding the means to express the utter disappointment and anxiety I feel about the state of the country.

I feel like I have never before seen people so pitted against each other on social media.  Maybe it’s true that people say things there that they wouldn’t say in real life.  But it is sad.  It is heartbreaking.  To see people calling others names for having an opinion that differs from your own.  To be attacking someone for their belief system or their choices because you would not have made the same choice.  To assume ill intent when all I have seen is sincere, educated people trying to make the best choices for themselves with the information that is available.

And then you add in the world crises.  People dying around the world from the decisions and policies of governments over a good portion of my lifetime.  I have limited information, and my opinion is simply that – my opinion.  I try not to judge.  I tried to not cry as I drove to work this morning.  Exhausted.

My therapist and I talked about the worry box this week.  A place to store those things which you cannot change.  To pack them away until such time that you give them attention, but only for a little while.  And then pack them away again to worry about only those things that you can control.  Tomorrow I will drive to work, write emails and plan for recruitments and counsel managers.  I will revise employment policies and implement insurance policies and get ready for our fall medical renewal.  I will look at old contracts and determine which ones can be destroyed because they are outdated.  I will talk to employees who have the same worries as I do, and keep mine hidden.  I will do those things which I can control.

Help me to believe that people are inherently kind and good, as my faith is faltering.

Today I had the day off, and I spent it running errands.  I picked up my new glasses!  Got paint for a deck repair project.  Took Yellow to the vet again.

Yeah.  Poor Yellow.  He has decided he really doesn’t like going in the carrier.  He peed on me as I was manhandling him in…  I can’t blame him.  When I first brought him inside back in May, he had an abscess in his armpit.  A surface wound, that was raw and oozy.  Off to the vet we go for an antibiotic shot.  It didn’t help.  So a stronger antibiotic – pills.  I mean who doesn’t love pilling a cat!?!  No effect.  The abscess was still there.  So then he had a procedure, under anesthesia, to debride the wound and suture it up.  Well guess what?  The sutures didn’t hold.  My poor guy!  So that brings us to today and the peeing incident.  We got to the vet, he cleaned it up again and Yellow is now sporting about 10 staples in his armpit.

He is now lying beside me and seems to have forgiven me.  Let’s hope that the staples hold.  He doesn’t seem to be bothered by them and is resting comfortably.

It is hot here again and smoky, but hopefully the heat and smoke are going to dissipate tomorrow.

On with the weekend!

One of the things I really wanted to do the second time I was in Washington, D.C. was to visit the National Mall again and see the monuments that I missed the first time.  I always say that there is never enough time to do everything, and I was excited to see more!

The Washington Monument, of course, is iconic, and featured in so many photographs!  I was completed in 1885, and stands 555 feet tall.  It is always a favorite!  One day I want to go to the top…

This Doric temple style memorial is the District of Columbia War Memorial, that honors the residents of Washington, D.C. who died in World War I.  It was erected in 1931.  The day that I was there, a couple was getting married!

The Korean War Memorial was placed in 1995, which several soldiers walking through junipers, meant to represent the terrain they walked through during the war.

The Martin Luther King, Jr. Memorial is a relatively new addition, added in 2011.  There are a number of King quotes places on the walls of the monument, and the impressive likeness of Dr. King stands in the center. 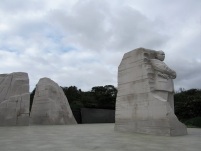 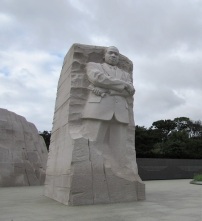 The Franklin Delano Roosevelt Memorial honors the President who guided the country through the Great Depression and most of World War II.  A polio survivor who was often confined to a wheelchair, I was glad to see that the memorial represented him as he was in real life.  There are several statues making up this memorial, including men standing in a breadline, and a man listening to one of FDR’s fireside chats over the radio.  I was also happy to see that Eleanor Roosevelt has her own statue here, as she did much to benefit the country separate from FDR.  This memorial was placed in 1997. 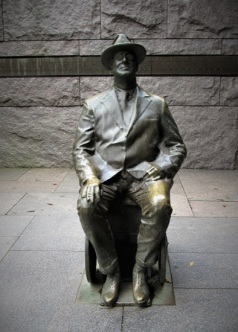 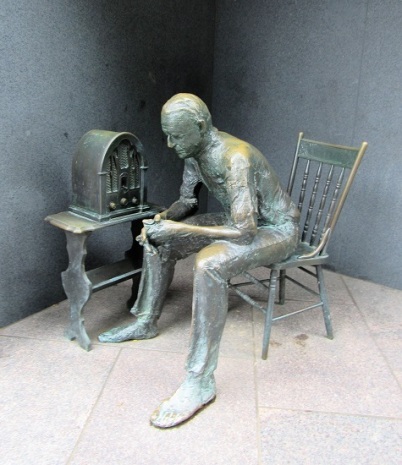 Finally, I visited the Jefferson Memorial, which was completed in 1943.  It has a huge statue of Jefferson, contained within a Neoclassical style building.  It is so beautiful and has a prominent location looking out over the tidal basin. 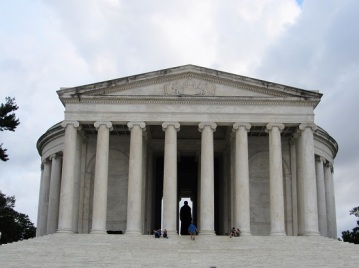 I wasn’t the only one enjoying the monuments, of course.  I saw lots of birds there too!  Dozens of ducks, a couple of Great Blue Herons and a Great Egret! 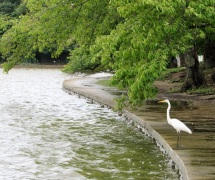 I enjoyed wandering and seeing all these tributes to strong, influential Americans!

I know, I know, it’s been a hot minute since I’ve been around!  But guys!  I got to go on vacation!  I got home Thursday night from a week at the Oregon Coast with my friend Jena, and it was amazing.

We did a ton of beachcombing, looking for agates, beach glass, seashells and fossils.  We visited multiple beaches, checking out what was at each one.  The weather was pretty cold and windy the whole week, so we got sandblasted each day and ended up washing sand out of our hair with every shower, but we were happy!  We dug in the gravel beds until our nails had dirt and sand embedded underneath.  We poked around in tide pools and flipped over rocks to see what was underneath.

We tried out a number of different breweries and one cidery, and sampled all the delicious food. Seafood, burgers, fish and carne asada tacos, nachos, totchos; we had so much good grub! 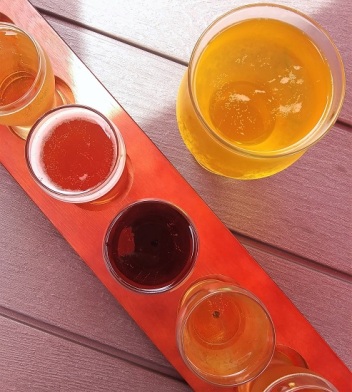 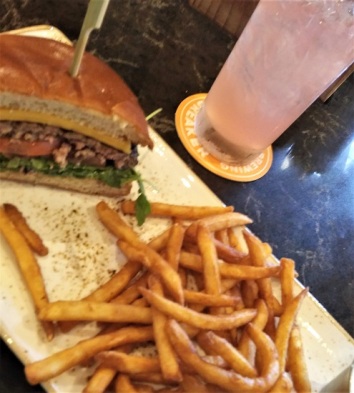 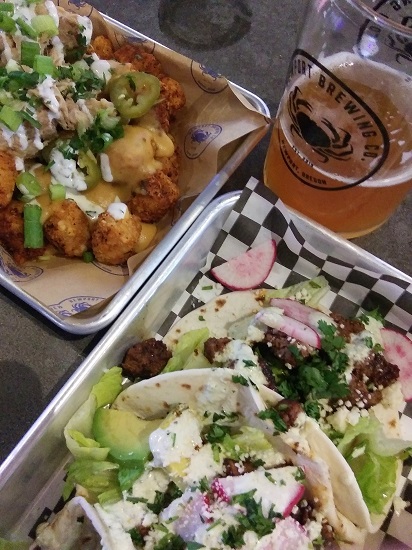 We watched the sea lions on the docks, saw a seal bobbing in the surf, and found pelicans on the sandbars. 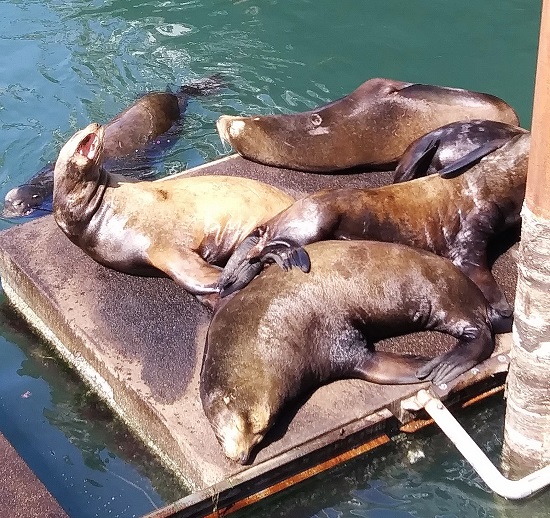 We visited a couple of the historic coastal lighthouses.  The Yaquina Bay and Yaquina Head lighthouses were both built in the 1870s, and although they are in Newport, Oregon, now, back then they were very remote!

We shopped in the local shops and got started on our Christmas shopping…  And of course I got gifts for myself too!

I practiced my photography and played around with the photoball that my dad got me the Christmas before he died. 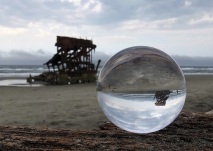 It was sooooo much fun! 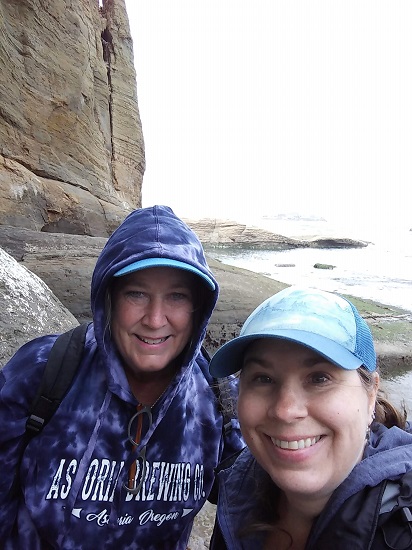 Of course, Cora and Yellow are happy that I’m home, and enjoying lap time and pets.  And I’ve been enjoying a lazy day at home after 8 straight days of constantly being on the go.  I mean, how can you relax when there are more agates to be found?

This 500 piece beach scene took us a couple of hours last night. It is a two sided puzzle so a second beach scene is up next! I wish I were there... #puzzle #winter #relaxing #needsomesun
Spent the last two nights on a 1000 piece puzzle of vintage fruit box labels. I always love seeing these in antique stores, so it was a fun one! #puzzles #winter #relaxing #vintagefruitboxlabels
Mondaying... Glorious!
Making progress on this 1000 piece Seahawks panoramic stadium puzzle. The tiny fans are so hard! I wonder if any of my friends are in there! #puzzles #relaxing #winter #Seahawks
A pretty snow walk at Bend in the River Regional Park. It's so strange to see the huge #MississippiRiver iced over. #Minnesota #winter #snowday #morningwalk
We are redeemed! We managed to put this 500 piece puzzle together in 1 hour and 23 minutes! We don't suck after all! This time would have won the contest! #puzzles #relaxing #puzzlecompetition #winter
A local brewery had a puzzle contest; we couldn't go but thought we'd see if we could beat the winning time - 1h, 32m for 500 pieces. We chose the WORST puzzle to try on! ALL the pieces fit together & the colors were off; we had to rearrange pieces multiple times to get it right. Our time; 4 h 17 m. We have nowhere to go but up! 🤣 #puzzle #winter #notrelaxing
Done!
Kitty cat visits...
Finished the 1000 piece English hunt scene #puzzle last night. A bit of a challenge with muted colors and all traditional shaped pieces. I did this puzzle 20 years ago and it was still fun (and still missing one piece)! #relaxing #winter