I got this wine a few years ago when my girlfriends and I went to the Whidbey Island Half Marathon.  We did a wine tasting in a little wine shop in Coupeville, WA, and I fell in love with this wine.  I finally opened it, and it did not disappoint.  It is a red blend, with bold flavors of blackberry and hints of tobacco and cocoa, with medium tannins.

Genoa Cellars is located in Woodinville, Washington, and they focus on Super-Tuscan-style wines made from Sangiovese blended with Cabernet Sauvignon, Syrah, and Merlot.  They source their grapes from vineyards in the Wahluke Slope and Red Mountain regions in Eastern Washington.

I couldn’t find any information online for the 2013 vintage, but the Genoa Cellars 2015 Flying Colors Tuscan-style Red Blend won Double Gold in the Cascadia International Wine Competition. The blend for the 2013 vintage is 53% Sangiovese, 32% Syrah, 12% Cabernet Sauvignon, 2% Cabernet Franc, and 1% Petit Verdot.

Last winter, I signed up for my ninth half-marathon, the Whidbey Island Half!  It was April 23, 2017.
There was just this one little issue that came up: I was fighting one of the worst colds I have had in a while.  I had been completely down for the count the weekend before.  Like the kind of sick where you are awake for less than 2 hours and you already are in dire need of a 3 hour nap…  In fact, my only outing the weekend before the half-marathon had been to venture out for a very slow stroll around the tulip fields for a few hours, which had completely wiped me out and sent me back to bed…
During the week I was feeling a little better, so I decided to still try to do the race, knowing I could just take it easy.  I didn’t need to run much, or at all, if I still wasn’t feeling up to it.  Katie, Shelley and I all met up at the expo, then headed off for a girls’ weekend excursion in scenic Coupeville, Washington.
We checked into our accommodations, the Wisteria Cottage at The Inn at Penn Cove.  It was a very reasonably priced option for Coupeville, where most of the lodgings are Bed and Breakfasts.  Most of the hotels in Oak Harbor were either booked, or had jacked up their rates for the marathon weekend.  The Inn at Penn Cove is also a historic house and cottage, consisting of the Jacob Jenne house built in 1889, and the doctor’s office turned cottage where we were staying, which is also historic (sadly I don’t know when it was built – trust me, it was old!).

The Wisteria Cottage at the Inn at Penn Cove

Katie was convinced our cottage was haunted.  So haunted in fact that we had to drag the futon into the main room, because she didn’t want anyone sleeping in that bedroom alone…  The proprietors are warm and welcoming, giving us a rundown of the quirks of the place, and even letting us know that it was no problem at all to have a very late checkout so we could go back to the cottage for showers after the race.  And in case you were wondering, no, we didn’t see any ghosts…  However, the drawers in that bedroom wouldn’t stay closed – was it due to the fact that the floor was sloped, or something supernatural?!  You decide…
After getting our lodgings squared away, we poked around in some of the shops in the historic downtown area, and enjoyed a wine tasting at the Vail Wine Shop, where we chatted and laughed and enjoyed ourselves.

Rosé and tasting menu at the Vail Wine Shop 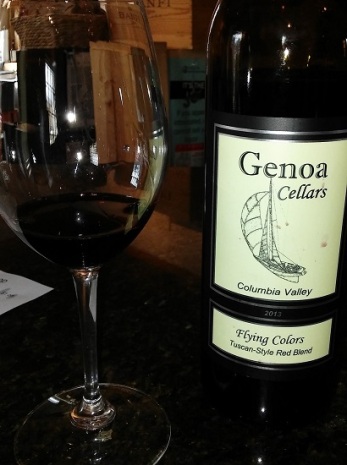 L to R: Me, Katie, Shelley
After that, we enjoyed the lowering sun and the remaining afternoon while we waited for the Front Street Grill to have a table ready for us for dinner.  I love spending time with my girlfriends, and we thoroughly enjoyed the quiet afternoon relaxing.

The public dock in Coupeville

Black Turnstones on the shore 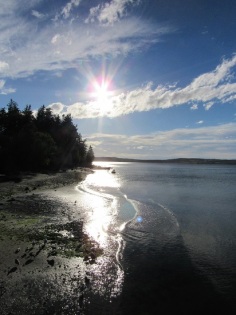 We had a water view table at the Front Street Grill, and I had the Saffron Mussels and a beer sampler.  So delicious!

Katie and my beer samplers at the Front Street Grill

I had a wonderful day, despite my continuing fatigue…  After dinner we headed back to the cottage to turn in early.  We had some calorie burning to do in the morning!