I did a whole workweek upon my return from vacation.  Thankfully it was a super short week, as Monday was a holiday and Friday was my regular Friday off.  Even three days was a long week!  Sometimes things at work just have a way of weighing me down; it was that kind of week.

It seems I brought the cold weather home, as we got a dusting of snow on Tuesday morning and then a couple of inches on Thursday.  It is gone now, with the last of the snow washed away by heavy rain on Saturday afternoon.  This picture doesn’t show as much snow as I got, as the big fir trees block most of the snow in that part of the yard.

Good thing I got my yard work done in the morning, before the rain started, but my next chore will be to tackle the parts of the yard that were still covered in snow yesterday.  That’s the thing about the Pacific Northwest; it never gets cold enough or snowy enough for the yard work to stop, especially if you have a lot of trees in the yard like I do.

Other than the yard work, I’ve had a pretty lazy weekend; I finished a puzzle yesterday afternoon.  This beauty!

Cora enjoyed “helping” with the puzzle, and both Cora and Yellow have enjoyed having lots of time to snuggle now that I’m home!

I need to get some laundry done – why do the chores never stop!  Some purging…  And get the house cleaned up in anticipation of the work week.  A five day work week this time!

I am signing up for a 15K – the Hot Chocolate Run that I have done several years in a row.  So far, one of my girlfriends will be doing it with me; I’m hoping more will sign up!  I need to get back into shape, and there’s nothing like a little incentive.

Hopefully the spring weather and warmer temperatures will be here soon!  I can’t wait!

I got home late Monday night from two weeks on vacation in Minnesota.  It was a much needed respite, and yet so very cold!

Getting home on Monday wasn’t easy though.  There was a winter storm warning in Minnesota that was due to bring 14 inches of snow.  Thankfully the snow came later and it wasn’t bad getting to the airport.  My first flight was great!  My second flight was canceled due to high winds.  I ended up taking the shuttle bus home, but my bags didn’t come with me.  I got one bag back last night and my second got home today.  And all the Minnesota cider I had nestled into it survived!

Unfortunately, I got home to a cold snap so encountered temps of 25 degrees and black ice on my commute, making for a treacherous drive on Tuesday.  But the sun is out!  And it warmed up to 44 this afternoon, making it much warmer than Minnesota now.

My vacation was spent doing many cold weather activities.  Hiking, snow shoeing, visiting an ice castle and an ice maze, ice fishing, frozen waterfalls and other fun winter activities!  I had a great time, but didn’t always stay warm!  In the evenings, I got to work on a puzzle, watch movies, play games or just read.

In other news, my state’s Governor finally announced that he would lift our mask mandate no later than March 21, long after most other states.  So that may mean that the COVID Diaries may finally come to an end, and it will be time to have a new “thoughts on life” series.  One can only hope.  Stay tuned!

For the first time in a long time, I opted for a vacation to a cold place in winter. Minnesota! I figured for once I could try to embrace the cold.

I’ve been doing all sorts of cold weather activities, including hiking, snow shoeing, ice fishing, and seeing the world’s record largest ice carousel. I have been having fun! But it is seriously so cold! So far the coldest it has been in the morning has been -9 degrees! Yikes!

I still have a few more days to cram in ice castles, an ice maze, and more frozen waterfalls! Not to mention tomorrow night’s fish fry…

I have to say, the cold still beats a day in the office!

The Utopia Experiment, by Kyle Mills

Can you imagine if someone invented the next phase in technology; a cell phone but WAY more.  A device that can read your brain waves, in order to give you an incredible experience.  Apps that appear in your field of vision and can be manipulated with your thoughts.  A device that corrects your vision and hearing, and gives you a sensory experience unlike any other.  And oh, did I mention that your nightly insomnia can be miraculously eliminated? 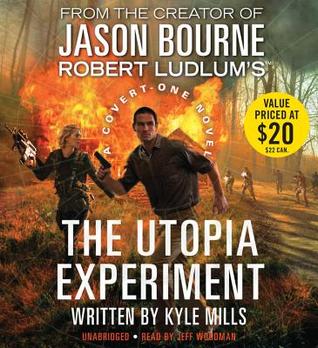 Dr. Christian Dresner has invented just such a device.  It has potential capabilities for people with disabilities that can only be dreamt of.  And he’s created a military version that the U.S. will have exclusive rights to that will allow for U.S. military dominance and will hopefully bring peace to the world.

Dr. John Smith is assigned to explore its military usefulness.  He thinks it is great, until an old friend, Randi Russell, shows up with information and a gut feeling that something deeply sinister is going on…

Kyle Mills wrote a fast paced novel that held my attention from start to finish.  His way of explaining complex technological innovations made it easier to grasp the concepts that were responsible for the premise of the novel.

I was intrigued by this novel.  Parts of it seriously blew my mind, in terms of imagining the next horizon of technology and the dark purposes it could be used for.  My brain regularly got off on tangents about the power that the tech industry has over us.  There are some troubling parallels to things that are happening in the world today.  For someone with bad intentions, I shudder to think…

The Weight of Water, by Anita Shreve

The outer shoals of Maine, is one of the most inhospitable places in the United States.  But the fishing is incredible.  So John and Maren Hontvedt, newlyweds, make their way from Norway to make a new life in America. 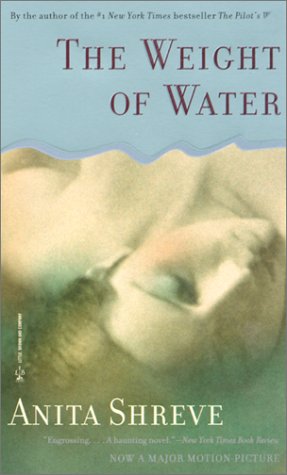 They live for five years on Smuttynose Island, part of the state of Maine, but actually closer to Portmouth, New Hampshire.  It is a remote outcropping with barely any soil, only a couple permanent residents, and few summer visitors.  The Hontvedts along with a few family members and an employee, build a life in their new, harsh home.

One day Maren, her old-maid sister and her beautiful sister-in-law are home alone when tragedy strikes.  After two brutal murders, only one woman is found alive, hiding in a sea cave, frozen to the core in her nightdress, clutching her dog for warmth.  The year was 1873.

In the present day, Jean Janes is on assignment as a photographer, to document the island and the little that remains of the murder site, for a magazine article on the murders.  She goes with her husband Thomas and five year old daughter, along with Thomas’ brother Rich and new girlfriend Adaline.  The five of them are traveling on Rich’s sailboat, trying to enjoy a vacation while Jean completes her assignment.  Little does Jean know that her story is heading for its own tragic ending.

Shreve’s novel goes back and forth between Maren’s life in the period of time leading up to the murders, and Jean’s present day life and troubled marriage.  Shreve weaves the story skillfully, and makes good use of the true story of the Smuttynose murders; although her ending diverts from the historical account.

It is a quick read, following Anita Shreve’s typical storyline on a woman experiencing a challenging relationship issue.  I enjoyed the book from beginning to end.

Seriously though, who remembers the raisin?  I’m quite confident that I never knew about it in the first place, making it impossible to remember the raisin.  If this is a thing, and they assured me at River Raisin National Battlefield Park that it is indeed a thing, its reach has been limited, at least in the last 200 years.

The War of 1812 was the impetus for the Battle of Frenchtown.  It had been occupied by the British, as a part of their larger occupation of the area around Detroit, Michigan; of course that was before Michigan was a state.  So the British occupied the area and the Americans, under the command of Brigadier General James Winchester, decided to try to drive the British out of Frenchtown on January 18, 1813.  Of course, Winchester was defying orders; he was supposed to be remaining within supporting distance of Major General William Henry Harrison’s (yes! the later President) column about 30 miles south.  Oops.

So Winchester went rogue and allowed Lieutenant Colonel William Lewis to attack Frenchtown with 666 troops, most of them inexperienced regulars and volunteers from Kentucky.  They crossed the frozen Maumee and Raisin rivers and after a brief battle, they did manage to take Frenchtown.  Harrison didn’t like that Winchester and Lewis defied his orders,but he was pleased that Frenchtown was back in American hands.  The British were less than pleased.

The British, as you can guess, set about sending troops from Fort Malden and got to Frenchtown on January 22.  The locals tried to warn Winchester that a large column of British was coming, but he ignored the warning, thinking that the British would need more time to prepare an attack.  Big oops.

The British and allied Potawatomi tribe attacked and basically annihilated the Americans.  In less than an hour, over 300 were killed and about 500 were taken prisoner.  Anyone who could walk was force-marched to Fort Malden; those who fell behind were killed.  But those left behind at Frenchtown didn’t suffer a better fate.  The Native Americans set fire to the homes that housed the injured soldiers; those that could escape were shot as they exited the buildings.  The others were burned alive.

Winchester screwed up in not heeding the warning of the impending arrival of the British.  If he had moved his troops away from Frenchtown, it is likely that the reinforcements from Harrison’s Army would have arrived and changed the outcome of the battle.  As it was though, news of the massacre traveled far and wide and incited feelings of horror among Americans.  In fact, Kentucky, having lost many prominent citizens in the battle and massacre, encouraged many new enlistments for the war.

The National Battlefield Park is relatively new and there isn’t much there.  It officially opened in 2011.  The Visitor’s Center had some interesting exhibits and a movie on the battle, and you can walk an open field with some historical markers.  They have plans to reconstruct some of the buildings and acquire surrounding lands to protect more of the battlefield.  They are making progress, as they opened a new Visitor’s Center since I was there – it’s huge!  It will be interesting to visit again in another 10 or 20 years to see how it has changed!

Life on the marshmallow farm...
Last night's sunset was stunning. It was a brighter pink in real life. #sunset #sunsetphotography #shadows #landscapephotography
Today I sold the home I have lived in for the last 10.5 years. It's been a good home that put me on a solid track to my goals. Now it is time for the summer solstice to bring new dreams and new memories! #homesale #dreams #financialgoals #bigthings #summersolstice #newbeginnings
Foggy morning on the homestead... #weekendvibes #morning #fog #landscapephotography
Morning walk on the homestead... #morningwalk #flowers #homestead #spring #landscapephotography
Moody clouds on my lunch walk... #afternoonwalk #moodyskies #clouds #landscapephotography #photography
I stole my sisfur's puff last night... I get what I want... #catsofinstagram gram #cats #IgetwhatIwant
A cute painted brick from my walk up to the University the other day. #PNW #afternoonwalk #paintedbrick #streetart
Sunny mornings...
This...