The last day of my San Diego vacation I was on my own. Angela and Allysa had departed the previous day, and Renée left that morning to attend her conference at the hotel. I had several hours until my 5 pm flight, so I packed up and took off for a bit of solo touristing.

First up, I decided to head over to the Hotel del Coronado. I have ogled it on websites and friends’ travel albums for years, so I didn’t want to leave San Diego without seeing it in person! It is a big hotel; actually it is the second largest wooden structure in the United States, (second only to the Tillamook Air Museum in Tillamook, Oregon – which I still totally want to visit, by the way). It was built during the Victorian Age of Grand Hotels; when it opened in 1888 it was the largest resort in the world.

The beach side of the Hotel del Coronado

The Del, as it is often called, is famous for its round pavilion tower. It was a construction marvel, requiring fresh water to be piped under the bay from San Diego, and lumber to be shipped from Eureka, California. It had electricity right from the beginning, although the builders ran the electrical wiring through gas piping, just in case that new-fangled electricity thing didn’t work out… The hotel is right off the beach, with gorgeous views of the water. 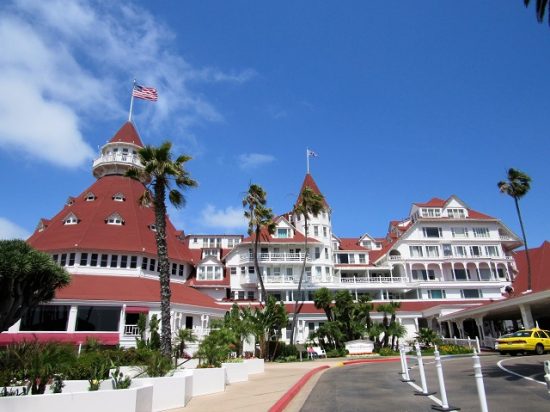 The street side of the Hotel del Coronado

I wandered around the outside and checked it out; there are some areas that are only open to guests though. Inside, on the bottom floor, there are shops and a little coffee shop café. This is where it really gives itself away as someplace where the other half lives… The shops are super ritzy, and drip coffee costs $5!

I would love to have a spot here on a hot summer day.

The Hotel del Coronado has hosted its share of famous people, including Rudolph Valentino, Charlie Chaplin, Clark Gable and Mae West, as well, as several Presidents. McKinley, Taft, and Wilson, all stayed there, and so has Barack Obama. Although it is out of my price range right now, I hope to be able to stay there one day, but an outdoor selfie will have to do for now! Hopefully it will be a famous landmark for another hundred years! 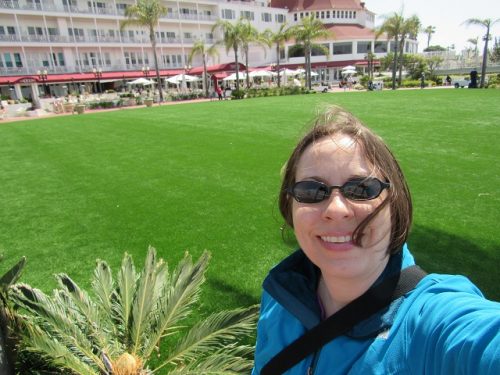 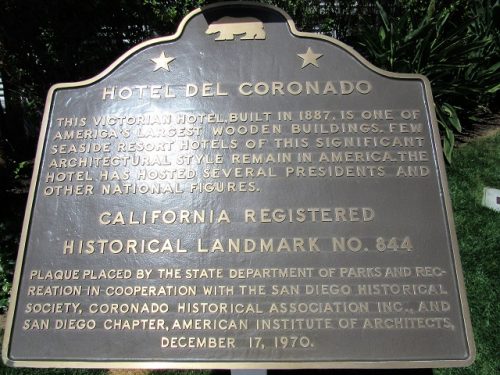 I love the Historical Landmark signs…

After checking out The Del, I decided to spend a bit more time at Balboa Park. I wanted to visit the NAT, short for the Natural History Museum. They had a couple of movies on whales that were included in the price of admission, one in 3D! I watched Ocean Oasis, about Baja California and the islands off of it, and the phenomenon that allows this area to team with ocean life. And I also watched Whales in 3D, which had the most incredible underwater footage of several whale species. What majestic creatures!

A reproduction mammoth skeleton at the NAT

I also had time to see the exhibits, including one on the fossils in the San Diego area – it was very interesting. They also had a whole collection of skulls; rodents, birds and larger mammals. It was fascinating to be able to compare the different shapes and sizes of skulls. I know, I am a little morbid, but I found it very fascinating!

Ammonite Fossils at the NAT – I loved these!

It was the perfect amount of time at the NAT – I was just finishing up with the exhibits when it was time to head out to return to the airport. I did get a bit freaked out though on the drive back to the airport. The rental car return is very poorly marked, and I circled around the streets near the airport for a while before I found it. ARGH! Luckily, I managed to find it in time, and checked in and made it through security with enough time to spare.

What a wonderful trip!  I can’t wait to return to San Diego!

After we left the Mission San Diego de Alcala we headed downtown to Old Town San Diego, located adjacent to Presidio Hill, underneath the bluff. For the first several decades, residents preferred to live within the Presidio walls or just outside, for protection from other Europeans or hostile Native Americans. By 1820, the threats had decreased, and San Diego residents were choosing to live at the base of the bluff in what is now Old Town San Diego.

The problem with the site of Old Town San Diego was that its location was several miles from navigable water, so supplies had to be brought overland from Point Loma several miles away. In the 1860s, residents began abandoning Old Town in favor of New Town (where the current downtown is now) because of its proximity to shipping ports.

We were hungry when we arrived after touring the mission, so we found a Latin American restaurant called Berta’s which offered cuisine from several Latin American countries. Renée had a wonderful Mango Avocado salad, a Chilean empanada and a glass of sangria, and I had Chilean Pastel de Choclo with a glass of Sauvignon Blanc. The sun was shining and it was warm – we enjoyed just sitting outside and having our meal. 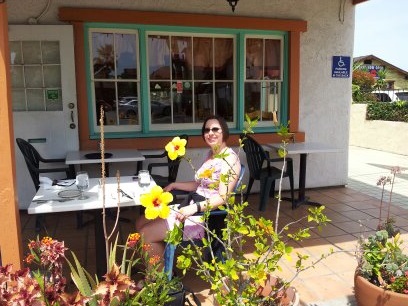 Me sitting at Berta’s among the Hibiscus flowers 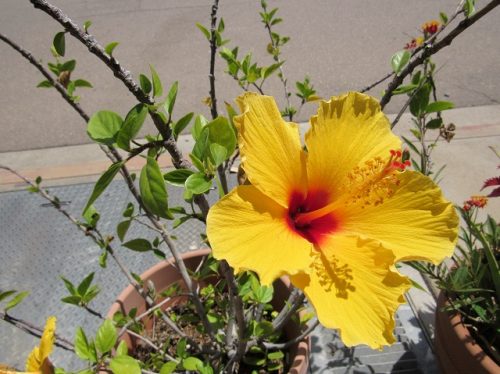 The gorgeous Hibiscus at Berta’s

After lunch, we walked across the street to the San Diego State Historic Park – a collection of historic buildings built between 1820 and 1872, when New Town took over in dominance. The park contains five original adobes, a schoolhouse, blacksmith shop and a stable, among dozens of other buildings. Some are reconstructions. We enjoyed wandering around in a rock shop that was originally the Assayer’s Office, and toured some of the different displays in one of the adobe homes and other buildings.  We even sat on a wooden donkey!  The real donkeys didn’t want to come over and talk to us…  The entire park is free to visitors, and there are living history demonstrations too. 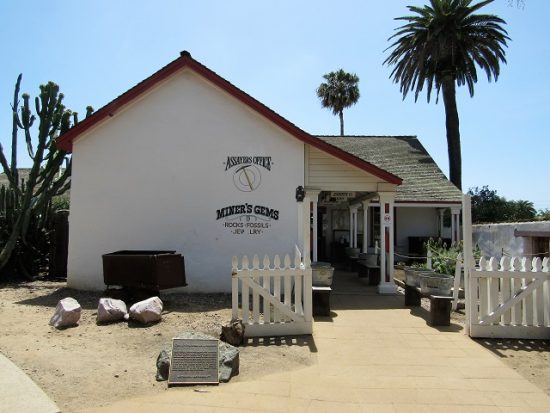 The Assayer’s Office – there was a wonderful rock shop inside 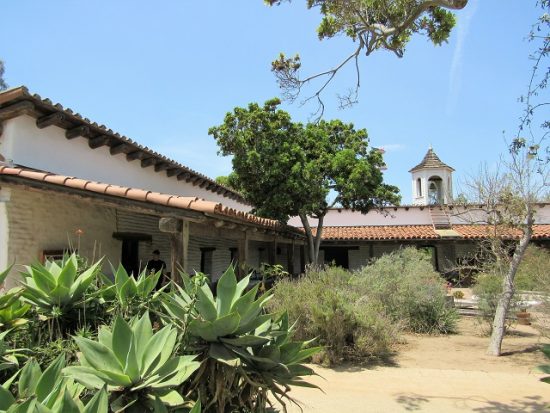 One of the original adobe homes at Old Town 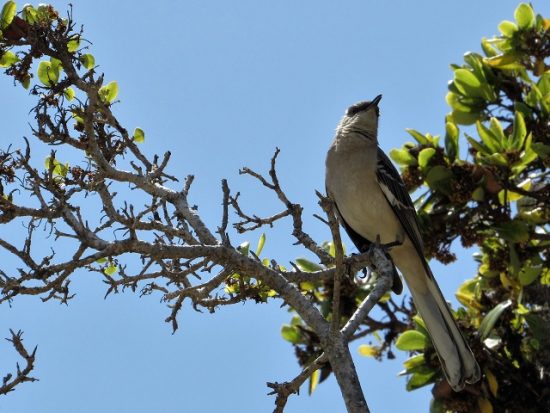 This little bird was singing his heart out at Old Town

Nearby, there are other historic sites that are not part of the San Diego State Historic Park too. I could have spent a couple of days just wandering around Old Town San Diego, checking it all out. I wish I had more time! It is nice that Renée has a similar appreciation for historic sites, so I didn’t feel like I needed to rush. I would have loved to have seen the Whaley House Museum that is nearby. I will certainly have to return… 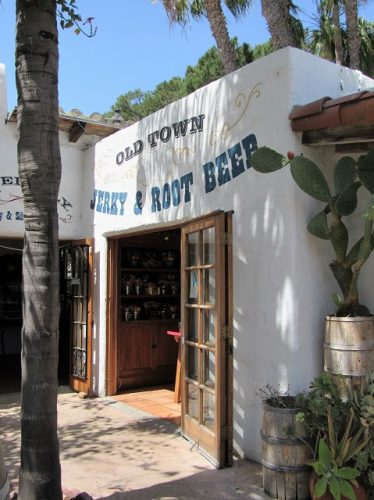 One of the shops at Old Town San Diego – an interesting combination of items.

Renée had to be back at the hotel before 2:30 that afternoon for a meeting for her conference, so we left Old Town San Diego and headed back to the resort. I took the opportunity to get in some pool time. Angela and Allysa had to head out to the airport to fly home, while I was staying one more day. I enjoyed some time just laying by the pool with my book and my travel journal. And then I spent some time walking along the beach and collecting some shells.

That evening Renée and I went out to dinner at the Pacific Beach Fish Shop with a coworker of hers (my former coworker) who had also flown in for the conference. We had lobster lumpia, fish tacos, and beer. I swear I would be there all the time if I lived there…  It was all so delicious!

Our meal at the Pacific Beach Fish Shop – to die for! 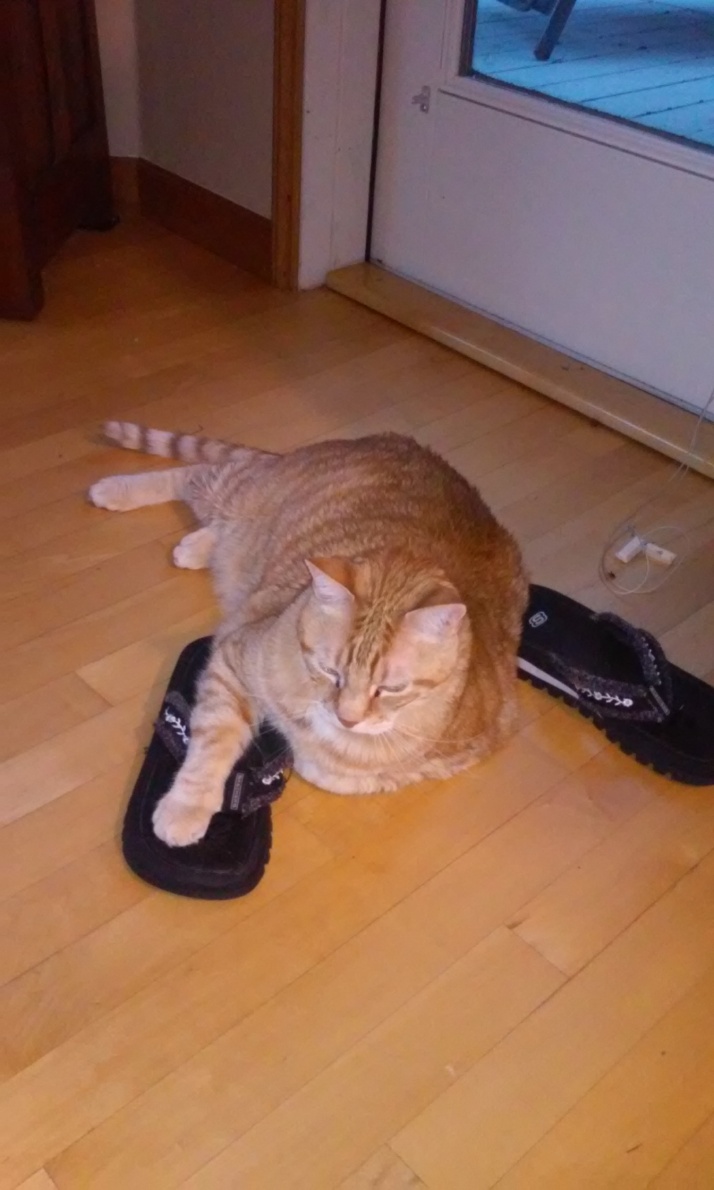