In April of 2009, Jon and I were able to get cheap fares to Reno, Nevada, so we decided to fly there and drive over to Jon’s old stomping grounds, Sacramento. We flew into Reno over the mountains and through the turbulence, but we made it there in one piece. The Reno airport is like being in a casino, with all the slot machines and ringing noises. Fortunately, since I don’t like casinos, we were able to escape pretty quickly after picking up the rental car.

Once we were on the road, we made our way to the interstate and heading towards Sacramento. We got to head over the mountains on Donner Pass, which was fun. Even though it was April, it was still snowing on the pass, and quite cold. I wasn’t dressed for the weather, which made stopping at the rest area a chilly excursion. It was really interesting to see the terrain and the conditions that that Donner Party were subjected to as they tried to cross over the pass 160 years ago. I can imagine even now how difficult it would be without the modern conveniences that we have today – cars and paved roads. Those people stuck it out in the deep snow, starving, with no supplies and no idea how far it was to get back to civilization. It is amazing to think about how strong and brave those people were. And here we breezed over the pass to Sacramento in 2 hours.

We stopped for a little while and had lunch in the town of Auburn. It was a beautiful sunny day and we wandered around town for little while. Me being the nerd that I am, I made Jon pose for pictures with me in the sun. And there was antique mining equipment, just begging to be posed with. So we did.

When we got to Sacramento, I was struck by how cold it was. Jon promised that it would be hot in April. Like shorts and tank top wearing hot. Really, it was more like jeans and sweater weather. I was disappointed. There was one day that I did get to lay out in the sunshine by the pool, but it was too cold to go in the water, and I even had to cover up with my towel at times. Certainly NOT hot like I was promised.

We had a couple of days to hang out, so we did some of the touristy things in town.  We went down to Old Sacramento, which is a tourist area right on the river. Old Sacramento was built around the railroad line, and has original old west buildings and others that have been rebuilt according to period specifications. It is touristy, with the shoppes (yes I meant to spell it like that) selling taffy and souvenirs, along with art galleries and a few import stores. They had some neat stuff, but at tourist prices (translate that to: stuff we can’t afford). We had lunch at a fish and chips place, eating our fish and chips the traditional way with vinegar. I just don’t understand why that hasn’t caught on here – it’s so much better than tartar sauce. 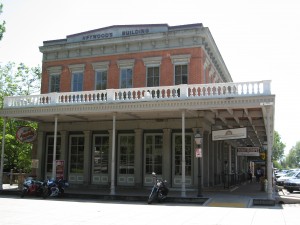 What was really cool at Old Sacramento was the Railroad Museum. They go chronologically through the history of the Railroad, from the first laying down of the railroad ties by the Chinese workers, to present day. They document the horrible conditions that the Chinese were subjected to, and the dangers of the work. They talk about the experience of laying the line up and over Donner Pass, and how the workers would frequently get trapped in storms like the Donner Party did. The museum has all sorts of different engines and railroad cars that you can look at, and some that you can go through. They have dining and sleeping cars from the heyday of train travel that reminded me of several classic movies. One day it would be really cool to take a cross country train trip for a couple of days, to live the experience. Just not one that is long enough that I’d really be in need of a shower. I’m not sure how that works on a train, but something tells me I just don’t get one. But I digress… The Railroad Museum also had a whole exhibit on railroad toys (my grandfather would have loved this – he was really into toy trains), and it was neat to think back on a time when all little boys wanted to be train conductors or engineers.

Me with a Railroad Car

So, that wrapped up our day – we were tired but happy.

2 thoughts on “I Was Promised that Sacramento Was Hot!”

Tonight's puzzle...
I almost won! One day I might... #cribbage #cardgames #brewery #lazydays
Visited the Charles Lindbergh Boyhood home in Little Falls, MN. It's closed for the season so I will have to go back. Lindbergh lived here as a teenager and young man before his famous flights. It was built in 1907.
Went to the wildlife refuge for a walk and saw a Bald Eagle nest, with two eagles at home! Pretend it's a good photo; my cell phone doesn't do it justice. I'm planning to go back with my big camera! #baldeagle #birdsofprey #nationalwildliferefuge
Someone stole my spot... #catsofinstagram #sundayvibes #cats #snoozing
Miss Cora sunning her belly in the window for #Caturday... She's such a cute one! #catsofinstagram #cats #bellyrubs
Finished the United States of America #puzzle last night! It went quickly and was fun, but sadly it was missing 1 piece. I also learned that I am now "I need my reading glasses to read the tiny print on the puzzle pieces" years old... #Americana #relaxing #weekendvibes
Started a new puzzle last night. The United States of America. Made some good progress! I love Americana #puzzles. I need to take a photo of the box! #ThanksgivingDay #puzzletime #weekendvibes
Last of the light...
Had some ciders at Milk and Honey yesterday. They have some really delicious ones! It was a nice relaxing day.