The next day, we slept in a bit and got ready. We headed out for breakfast and found a diner with some really good food, but the grumpiest waitress on the West Coast. Geez, you’d think that she had just waited 45 minutes for her breakfast!

We decided that we were going to head over to the San Francisco Museum of Modern Art. I’m not sure that I had ever been to a modern art museum, and now that we have, Jon and I both agreed to avoid them in the future. I’m not an art snob by any means, but I think that for it to be art, it needs to be something I can’t do. These exhibits were just weird. There was an exhibit of collages made with other artist’s work (kind of a Van Gogh, Starry Night decoupage kids project), a billiard table with no pockets, a canvas painted all red (I could totally do that!), and my personal favorite, a room sized piece that consisted of a white clay baby Jesus surrounded by concentric circles of black clay poodles. Really, what is the symbolism of that? Are you telling me Jesus is going to get taken down during the second coming by a hoard of rabid poodles!? Jon and I were both in agreement that traditional art and history museums are more our style. But I supposed you have to do it so you can say you have.

We left the museum and decided to have a little adventure with public transit. It was pouring, and we wanted to go see the Haight-Ashbury district and Golden Gate Park. Bus fares in San Francisco include the return ride too! So we got on and passed by the Capitol Building with its gold leaf dome, and passed through the Mission district. We got off in Haight-Ashbury and spent some time wandering around in the shops in the area. There was a really cool used bookstore with lots of good history books. And Jon’s favorite place, at the very end of the road… the record store. Amoeba records is like the Costco of record stores. New, used, movies, they had it all. Jon was in heaven! And I was bored. But he tries his best to not make me wait too long. He got a couple of things, and then we took a walk in Golden Gate Park. Mind you, it wasn’t really all that pleasant, because it was raining, so it was a rather brief walk. Once we got on the bus going back towards the Baldwin, we got to drive by The Painted Ladies! They are as cool as they look in all the movies. If I could live there, I would totally move to San Francisco. Something tells me I can’t afford them.

Later that afternoon, we hooked back up with Pablo, and we got to go to another record store. This one had a weird valet elevator even! After that, we roamed around looking for something to eat, and found a little Thai place with the best food. The meal was delicious and the company was good. The only bad thing was that afterwards we had to venture back out in the pouring rain. By the time we got back to the hotel, we were soaked. My coat was still somewhat wet the next day.

The last day of our trip we only had a half day in San Francisco before we had to head back to the airport for our flight home. I had been curious about the Cable Car Museum, so after we got some breakfast, we walked to it. It was pretty neat. You can stand on a platform and watch all the cables in action. Literally, there are these gigantic cables, wrapped around gigantic pulleys, and the cable cars are pulled along their tracks from this location. They also have antique cable cars on display, and displays on the history of cable cars and how they came to be in San Francisco. And this museum is free too. We did buy a couple of souvenirs in the gift shop to help support the cause. 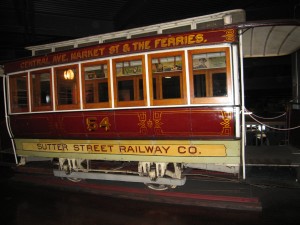 After having a weekend of fun, it was time to go home. Any decent vacation is always too short.