Approximately 34 million years ago, there was a lake environment in the Florissant Valley of Colorado.  The whole area was part of the Laramide Orogeny, which also formed the areas that now make up Rocky Mountain National Park, Colorado National Monument, and Black Canyon of the Gunnison National Park. 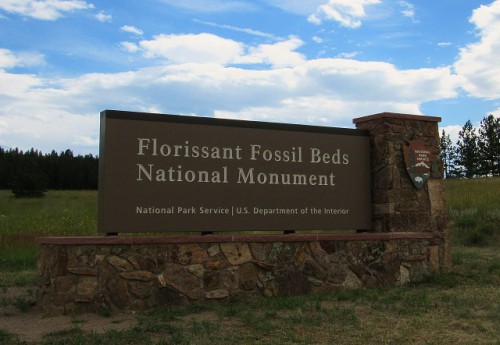 About 20 miles southwest of the Florissant Valley were several stratovolcanoes that erupted periodically.  Like Mount St. Helens in Washington state, these eruptions created large lahars, or mud flows, that would flow at high speeds down the valley.  One of the lahars flowed down into the lake in the valley, covering the flora and fauna in layers of mud, thereby creating a favorable environment for fossilization.

Florissant Fossil Beds contains thousands of fossils, with large numbers of invertebrates represented.  They include spiders, millipedes and bees, as well as clams and other mollusks.  Plant fossils include fruits, seeds, and cones, as well as 130 types of pollen.  I am amazed that you can tell one type of pollen from another when looking at a fossil!

And then, of course, there are the Redwood trees, part of the Sequoia family.  The redwoods that existed in the Florissant Valley are genetically distinct from the modern Redwoods in California.  But they are similar enough that it allows researchers to determine what the climate was like in Colorado at the time.

In the late 19th century, the fossils had been discovered, and researchers and tourists alike were flocking to the Florissant Valley to cart them off, especially large pieces of Redwood stumps.  At one point, two tourist lodges provided accommodations to tourists in the valley.  One of these lodges is actually the current Visitor’s Center.  The Park Service acquired the property after legal wrangling that pitted the Park Service and several scientists and citizens, who wanted the area protected, against landowners who profited handsomely from operating their concessions in the area. 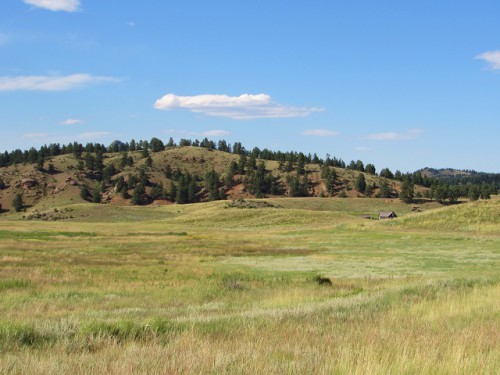 The view from the trail – looking over at the Hornbek Homestead

The monument was signed in law on August 20, 1969 by President Richard Nixon.  It protect 5,998 acres of land, and now the park receives approximately 61,289 visitors.

We were going to visit next!

Black Canyon of the Gunnison National Park is one of the relatively new entrants to the National Park system, designated on October 21, 1999 by Congress and President Bill Clinton.  Before becoming a National Park, it had been a National Monument since 1933. 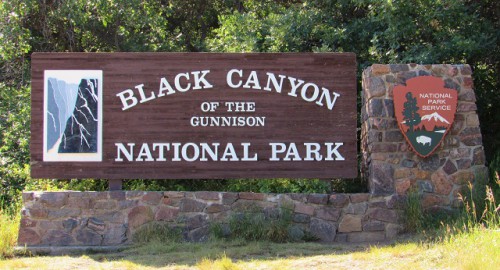 I love the sign at Black Canyon of the Gunnison National Park!

The park protects 12 miles of the 48 mile Black Canyon of the Gunnison, so named because the canyon is so narrow and the walls are so steep that some areas of the canyon only receive 33 minutes per day of direct sunlight!

Black Canyon is also notable because of its steep river drop; the Gunnison River drops an average of 34 feet per mile within the canyon, compared to the Grand Canyon’s average drop of 7.5 feet per mile.  At its steepest point, at Chasm View, the river drops 240 feet in one mile!

The canyon’s walls are predominately made up of Precambrian gneiss and schist rocks that are approximately 1.7 billion years old.  During the Laramide Orogeny, that also formed the Rocky Mountains, these rocks were uplifted, between 40 and 70 million years ago.

The Gunnison River took on its current course about 15 million years ago; the flow of the river was much higher than it is today.  As a result of the river not being able to change course within the canyon, it began to cut through the relatively soft volcanic rock at a rate of about 1 inch every 100 years.

The Ute Indians knew about the canyon and avoided it out of superstition; the first Spanish explorers had passed by before 1776.  However, the first written record of the canyon was created in 1853, by Captain John Williams Gunnison, who was looking for the best route between St. Louis and San Francisco.  Gunnison was killed by Utes the next year, and the canyon was named in his honor.

The Denver and Rio Grande Railroad began cutting a rail bed through the canyon in 1881; it took more than a year of heavy manual labor and was enormously expensive.  The narrowness of the canyon meant that they had to use the narrower gauge track – 3’ instead of the standard 4’ 8 ½” (how that ever became the standard is insane!).  The railway didn’t last long though, as it was bypassed not long after for cheaper, easier routes. 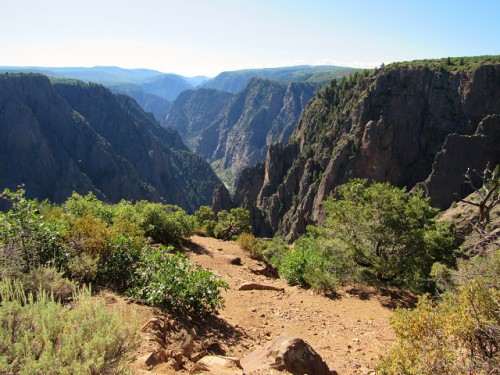 Our first view of Black Canyon.

Visitors today can visit either the North Rim (closed in winter) or the South Rim.  The two rims are not connected within the park, the route outside of the park to reach one rim from the other is about 90 minutes.  The South Rim, that we visited, has a 6 mile road along the rim of the canyon, with several viewpoints.  There is also a 5 mile, very steep road that provides access to the river, and a campground.  Vehicles over 22 feet are prohibited on that road, as it has very sharp switchbacks and over a 16 percent grade.

183,045 visitors went to Black Canyon of the Gunnison National Park in 2014, making it one of the lesser visited National Parks.  But we had an opportunity to visit on our trip!

Rocky Mountain National Park was founded in 1915, so this year was its 100th anniversary! 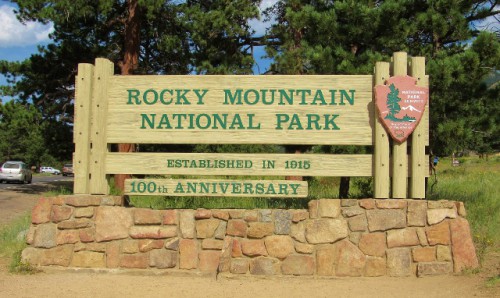 Within the boundaries of Rocky Mountain National Park are the Front Range of the Rocky Mountains, which was created by the Laramide Orogeny. It occurred between 70 and 40 million years ago, and is a fancy way of saying that the Rockies were pushed up, instead of being formed by volcanic activity.  They were formed by tectonic activity; one plate slid underneath another, causing an uplift of the mountains. Researchers think that immediately after the uplift, the Rockies were about 20,000 feet tall, but erosion has brought them down to their current heights – many over 14,000 feet.

The history of human habitation in the park goes back about 11,000 years, with spear points and other stone tools found as evidence; however, the people who came here are thought to have been transitory, without leaving evidence of permanent habitation.  Later on, the Ute tribe occupied the west side of the park until they were driven further east by the Arapaho tribe. 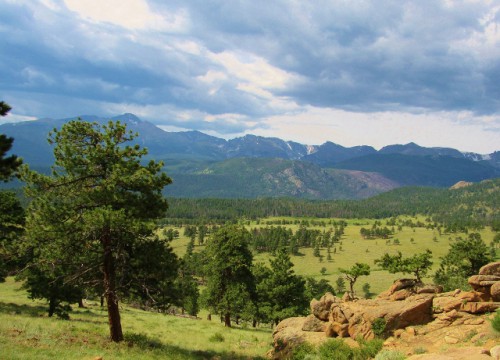 White people began arriving in the Estes Park area around the 1860s, staking land claims for grazing territory. On the west side of the park, there were several mines established in the 1880s, after the land was found to be rich in several minerals, including gold.  No matter who was living here, the higher elevations presented a harsh environment; winters were cold and very snowy.

In 1884, a sickly 14 year old boy named Enos Mills moved to Estes Park and was so enthralled with the scenery that he began lobbying for the area to be turned into a National Park. His original proposal included placing a larger swath of land under federal protection, but mining interests limited the amount ultimately designated as a National Park. But Enos Mills’ story certainly highlights the ability of young people to effect change!

Rocky Mountain National Park was designated by President Woodrow Wilson on January 26, 1915. Additional land has been added to the park since that time for a current total of 265,761 acres (415.25 square miles).  In 2011, approximately 3,176,941 visitors went to the park, enjoying more than 359 miles of hiking trails, 150 lakes and 72 named peaks over 12,000 feet.  The majority visit during July and August, although winter trekking, snowshoeing and skiing are popular too. 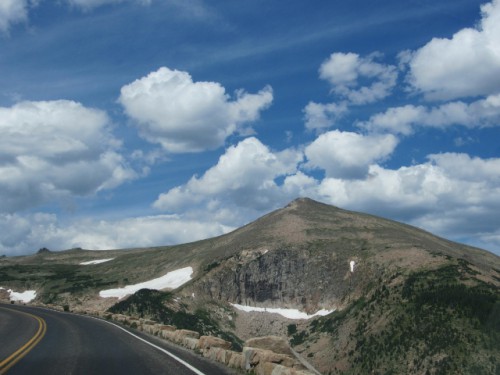 The view in the tundra habitat of Rocky Mountain National Park

The most famous scenic drive in Rocky Mountain National Park, the Trail Ridge Road, has a maximum elevation of 12,183 feet! It takes visitors through all of the park’s habitats at various points, and is a great opportunity for some amazing scenic views.  The park also has the distinction of having the highest elevation visitor’s center within the park system; the Alpine Visitor’s Center has an elevation of 11,796 feet!

And we were going to experience it!