Curse of the Narrows, by Laura M. MacDonald

On December 6, 1917, during the middle of World War I, a ship carrying high explosives in Halifax Harbor collided with another ship.  Predictably, it exploded. 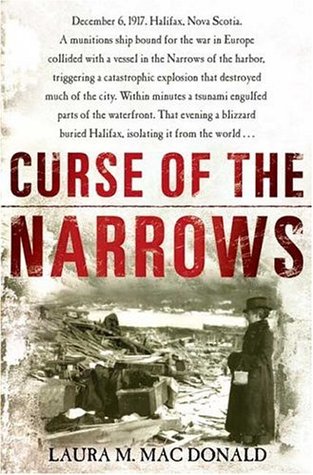 Unfortunately, a number of factors came into play in the worst possible way, and the explosion obliterated nearly everything within a half mile radius of the ship, including a heavily populated neighborhood of the city.  More than 2,000 people were killed and over 9,000 were injured. To add insult to injury, communications lines were knocked out, and a blizzard struck the evening of the explosion, making survival uncertain for those who initially lived through the blast.

It was, simply put, the largest man-made explosion up to that point in time.

Boston, receiving word of the disaster, mobilized its Red Cross contingent immediately and sent a relief train to provide assistance to the people of Halifax.  Several other nearby cities did as well, but the Boston relief train was the largest and most well organized, with doctors, nurses, supply coordinators and all sorts of relief supplies.

Rumors of German sabotage pitted people against each other, and sent officials off on wild goose chases to determine if a German bomb or submarine was responsible. Meanwhile the people of Halifax struggled with horrific and long-term injuries, lack of housing in the middle of winter, and the sad process of identifying and burying the dead.

The book details the day leading up to the explosion, and the stories of the people who lived and died in its aftermath.  Historical records research and first hand accounts provide grim detail of the experience, and MacDonald weaves the stories together into the larger narrative.  She does not shy away from the gruesome details of victims injuries, the trauma of separating families, and the legal battle after the initial relief effort ended.

My only criticism of the book is that it is rather poorly edited, with numerous typos and grammar errors, but that doesn’t take away from the story as a whole.  It is a well researched and well written book on an event that was once widely known, but has been largely forgotten to time.

This last winter, I was, as undoubtedly many of you were, sucked into the BBC historical drama Downton Abbey.  Just for the record, I feel the need to say that I have never watched daytime soaps (well except for the ones in Spanish – but that was homework, and a post for another time).  And Jon got sucked in too, so I feel like I am justified because he typically likes really odd movies (I’m not sure how that’s related, but I’m sticking to it).  And don’t ask Jon about it, because he probably wouldn’t admit it anyway…

So as a result of becoming completely engrossed in Downton Abbey, when I was wandering around the bookstore right before Christmas, this book was one that caught my attention.  Coincidentally, I found out later, Jon’s mom had asked Jon to pick out a book that I would like, so apparently he was trolling along behind me to see what caught my interest.

This is the story of Lady Almina, the Countess of Carnarvon who lived in Highclere Castle during the period covered by the show.  I’m not sure if the producers intentionally used pieces from Lady Almina’s life to create the show, but there certainly are some similarities.  That said, Downton Abbey is obviously fiction, and not intended to be a historical look at the lives of the Earl and Countess of Carnarvon.  This book is written by Fiona, the current (eighth) Countess of Carnarvon, who assumed that title when her husband became the Earl of Carnarvon in 1999.  They live at Highclere Castle, which is the country estate featured prominently in Downton Abbey.

Lady Almina and the Real Downton Abbey: The Lost Legacy of Highclere Castle

Lady Almina was born in 1876, and if you believe the rumors, she was the illegitimate child of Marie Wombwell and Alfred de Rothschild, the millionaire banker.  And since her ancestors are willing to put it in print, it is probably true.  Although Rothschild never publicly announced that she was his daughter, he made sure she was well cared for and gave her huge sums of money over the years.  Due to her connection to Rothschild, she enjoyed a greater social standing than she otherwise would have and was able to meet and fall in love with George Herbert, who was to become the 5th Earl of Carnarvon.  They married in 1895 and had two children.

Most of you probably already know George Herbert, even though you may not realize you do.  He is the guy who financed Howard Carter’s archaeological dig in the Valley of the Kings.  Yes, that Howard Carter – the guy who found King Tut’s tomb.  Anyway, among his other passions were horses and fast cars and jetting off on his many adventures.  Given they both had a propensity for spending money, George Herbert and his wife Almina were well suited to each other.

The book also explores in detail Lady Almina’s World War I employment – setting up a hospital for injured troops that were evacuated back to England.  She took on some of the hardest cases, and apparently had a very high survival rate.  There is something to be said for the fact that if you made it back to England in the first place, you probably had a much higher chance of survival, having already survived that long – but Almina and the nurses she hired certainly made the future brighter for the many soldiers who ended up there.

Like I said before, the book was written by the 8th Countess of Carnarvon, but Fiona is a commoner, having married into the family after establishing herself in the accounting field.  As a result, she has a candid and unpretentious perspective on life at the Castle and what it would have been like for Lady Almina.  She has done a great deal of research on her husband’s ancestor and portrays her as an imperfect being, with extraordinary love and generosity, but someone with significant flaws, including her inability to manage money.  Almina comes to life through letters and other documents in the family archive.

It is an interesting read, and you don’t need to have ever watched Downton Abbey to enjoy it.  It is truly a look into an extraordinary life in another time.