In December, I flew down to Los Angeles for a quick long weekend trip to Joshua Tree National Park. It was not extensively planned; tickets were booked just a couple of weeks before. But despite that, it was a fabulous trip.

The first day I started at the Visitor’s Center for some trips on where to go in the park. I wanted to see Bighorn Sheep. The Ranger said that they often hung out at the Willow Hole, which can be reached by a 7 mile round trip hike through several dry washes that connect to the popular Boy Scout Trail. I went. The trail was mostly flat, taking you by a popular rock climbing area; it was fun to stop and watch the climbers try their trade on the giant boulders in the park.

Me on the Boy Scout Trail 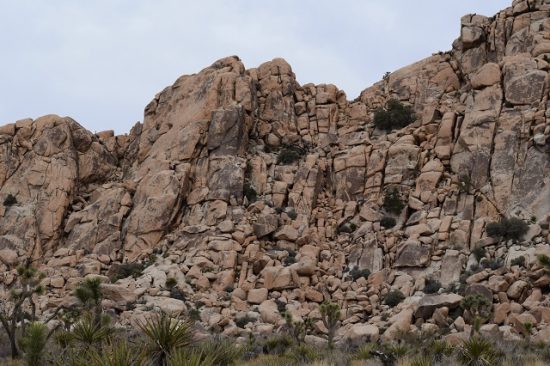 There are climbers on that rock!

After leaving the Boy Scout Trail, I was entirely alone – I did not run into anyone else on the entire hike. It was quiet, save for the birds chirping, letting me know I was getting closer to the spring. Sadly, I did not see any Bighorn Sheep on the hike, but I saw some songbirds and it was a nice pleasant hike nonetheless.

A cute bird near Willow Hole

The clouds gave way to sunshine

Barker Dam is a dam that was built by homesteaders in the early 1900s, to provide a consistent water source for their cattle grazing in the area. The dam is still there – the National Park Service left it intact when they took over management of the land, and it now provides water for the wildlife living in the area. It is another spot that Bighorn Sheep are known to frequent in the park. Except when I was there; then the Bighorn Sheep are not…

The Barker Dam hike also leads past several ancient petroglyphs. Unfortunately, they have been damaged by vandals. They are still neat to see, but keep in mind that the paint colors and outlines were the result of the vandalism, and not what these petroglyphs would normally look like.

As I was finishing the short Barker Dam trail, the sun was sinking lower in the sky. The birds and the rabbits were finding their way to their shelters for the night. I was able to find a good vantage point along the main road to watch the sunset. It wasn’t a spectacular viewpoint, but it did let me get some photos of the Joshua Trees silhouetted against the setting sun. 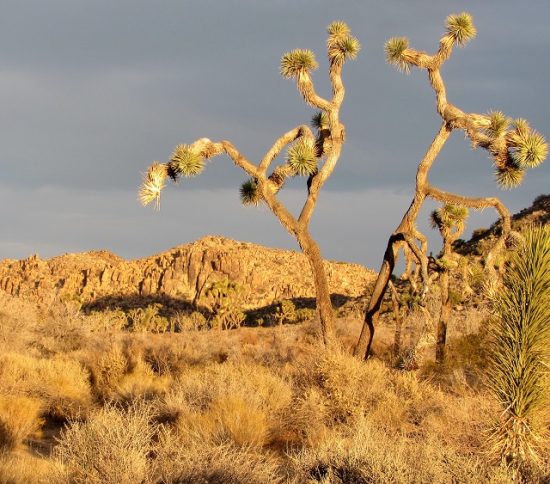 The golden light before sunset

The sun sets over Joshua Trees…

Dinner that night was pho at Pho 85 restaurant in Yucca Valley. It really hit the spot after 8+ miles of hiking that day! I finished off the day with some wine and TV in the room before heading to bed.  Peace…