The Greatest Battle: Stalin, Hitler, and the Desperate Struggle for Moscow That Changed the Course of World War II, by Andrew Nagorski

I listened to this on audio CD; it was one that I had picked up from a used bookstore several years ago, but hadn’t listened to.  Sadly, when I was about 2/3rds of the way through the book, I realized that the audio book that I had was missing CDs 8 and 9 out of 11.  Unfortunately, I feel like this might have been the best part of the book! 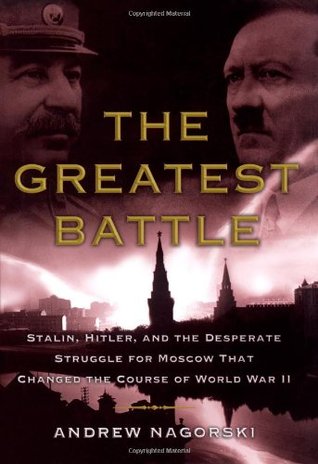 The Greatest Battle tells the story of Hitler’s assault toward Moscow in the fall of 1941, as well as the Red Army’s attempt to protect the city.  The author began by comparing and contrasting the backgrounds and styles of Hitler and Stalin.  They were obviously both larger than life figures, but they were also men who had significant similarities in their upbringing.  It was interesting to hear the similarities and ponder whether there was something that could be pinpointed to explain why both men came to power and why they were so willing to resort to such incredible cruelty, even towards their own people.

The author then explains Hitler’s push towards Moscow; he details the circumstances that gave Hitler an advantage, but also the mistakes that were made that ultimately made the campaign unsuccessful.  The Germans got a late start on their assault, and terribly misjudged the effect of the weather on the roads, and the needs of the troops for warm clothes and supplies.  The mud in the fall, and the freezing temperature and snow in winter severely hindered the army’s ability to complete their mission.

Of course, the Red Army has some major issues as well.  The Russian troops were not well equipped, often sharing a rifle among an entire platoon.  Many of their weapons were outdated or lacked ammunition.  And of course, no story about Stalin’s Russia is complete without speaking of the reign of terror that Stalin inflicted on his own people.  Stalin and the NKVD (the precursor to the KGB) often spied on their own people and troops, and severely punished their own people for perceived transgressions.  Stalin literally murdered millions of his own people leading up to and during World War II.  It’s hard to stand up a successful Army when you are assassinating and imprisoning many of your own officers and troops.

All in all, it was an interesting look into a portion of World War II history that I hadn’t explored much.  I do want to see if I can find a download of the complete book, so I can catch the missing chapters!