Woodstock, Vermont is a small town that I want to visit again.  It was beautiful!  There are so many nice historic homes, and a little stream that runs through town.  It has the cutest quaint downtown shopping district, and loads of charm. 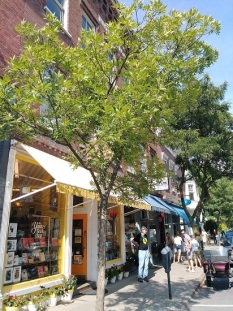 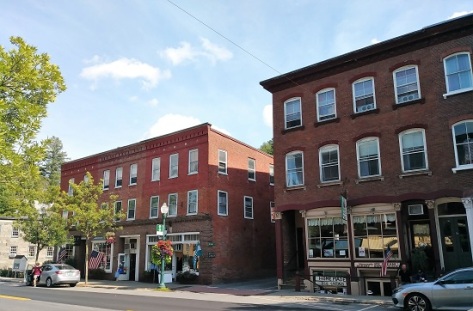 I poked around in the shops, getting some gifts for friends and family and a few postcards for myself.

I stopped in at Bentley’s restaurant, sat at the bar, and had a Citizen Cider and the most incredible burger made with locally raised beef.  It was so good, and I was so hungry!  I would absolutely go have that burger again! 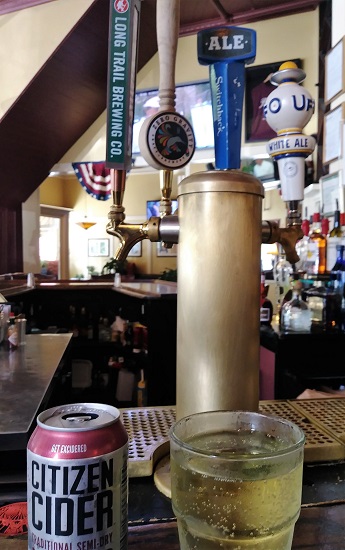 Also near Woodstock is the Calvin Coolidge State Historic Site in Plymouth, Vermont, about 20 minutes away.  This is certainly on my list of places to visit once I’m back in the area!  I just ran out of time on that trip.

And look at this covered bridge!  The Taftsville covered bridge was originally built in 1836!  It was heavily damaged by Hurricane Irene 2011; repairs took two years and it reopened in 2013. 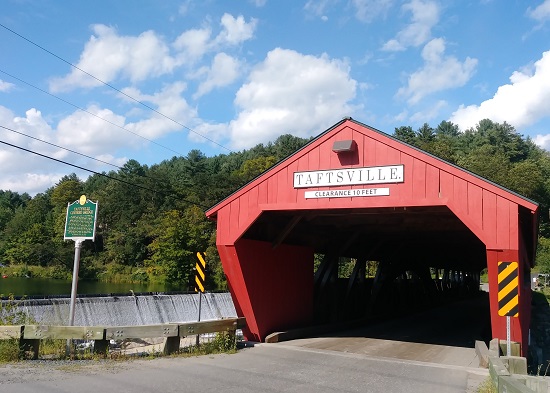 These photos are making me nostalgic and eager to get back on the road!

Besides a section of the Appalachian Trail, Marsh-Billings-Rockefeller National Historical Park is the only national park unit within the state of Vermont.  So it makes sense that it would be an interesting one!

Marsh-Billings-Rockefeller National Historical Park is named for the three families that owned this property, and each impacted the farm and the nearby community of Woodstock, Vermont in important ways.

The son of the first family who lived at the farm on Mount Tom, George Perkins Marsh, grew up seeing the environmental destruction that had been caused by deforestation in Vermont, both for sheep grazing and for industry, as wood was still a primary means of making the fires that were used to process glass, soap, and wool.  It was estimated that by the time Marsh was born in 1801, over 95% of Vermont’s forestland had been logged.  He saw the erosion and loss of fish habitat that occurred on his own property and began to understand the future impacts if people didn’t change their ways.

Frederick Billings grew up reading George Marsh’s writings, including his book, Man and Nature, and was impacted by the call to action of saving America’s forestland.  He became an attorney and purchased the farm in 1869, planted trees and set about creating a sustainable dairy farm, along with carriage paths throughout the property with scenic vistas through the forest.

One of Frederick Billings’ granddaughters married a Rockefeller, and inherited the farm in the 1950s, thus giving Marsh-Billings-Rockefeller National Historical Park its third name.  The Rockefeller family had long had a tradition of conservation and contributing to the idea of setting aside public land that would not be developed.  Laurance and Mary Rockefeller continued that tradition on the Billings farm.  They set about to remodel and modernize the mansion and farm, and opened the Billings Farm to the public in 1983.

The Rockefellers donated their residential property to the National Park Service in 1992, a donation that included this fabulous Victorian mansion with all its incredible furnishings, as well as 555 acres of forested land on Mount Tom, where the mansion is located. 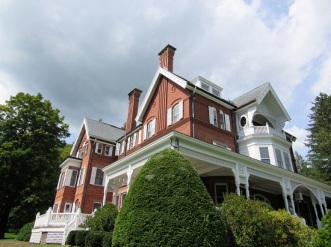 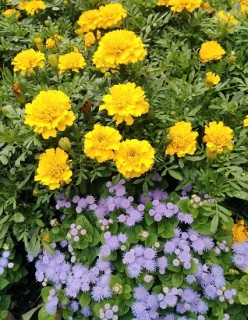 Marsh-Billings-Rockefeller National Historical Park is now a unit dedicated to conservation and operated closely with a private foundation that operates the Billings dairy farm next door.

When I visited, I did the tour of the mansion, which was truly one of the most spectacular historic mansions I’ve seen so far.  I was fascinated.  The fact that the Rockefellers donated all their furnishings made it a place that could be enjoyed for its ornate architectural beauty, its incredible artwork collected by the family, and the remaining evidence of the family’s life there.  So often we see mansions that are decorated with period pieces and we aren’t able to see that people – families – actually lived here.  They lived here with their hobbies, and collections and favorite books.  And they lived here with their letters to friends, family snapshots, their favorite comfy chair, and the hideous plaid carpet.  You can see the life lived in this mansion, and honestly, beyond the expensive art collections, it isn’t that much different than yours and mine.

I definitely want to return, and see more of the mansion and the property surrounding it.  It has several miles of hiking trails and carriage paths, and it would look spectacular during the fall colors!  Of course, I also wanted to see the village of Woodstock, Vermont, so I went there next!

September brought a new state under my belt – Vermont!  I had crossed the border the evening before, and booked a few nights at the Lake Bomoseen KOA for the Labor Day Weekend.  It was a great place to stay, with large wooded campsites, a lake to fish in, a little movie theater, game room and store. 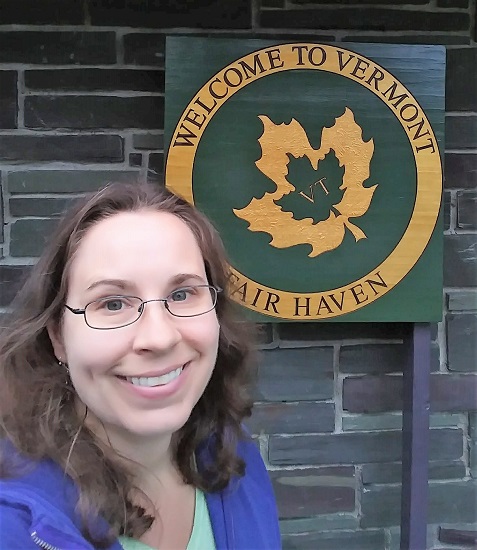 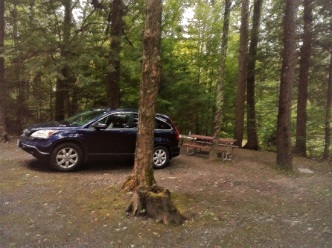 The next morning it was time to visit a museum that I was super-excited about – The Shelburne Museum in Shelburne, Vermont.  The museum was founded in 1947 by Electra Havemeyer Webb, a wealthy collector of American folk art.  In addition to collecting art pieces, she also undertook to collect 18th and 19th century buildings to house the collection, including houses, barns, a schoolhouse, a lighthouse, a jail, a general store, a covered bridge, and even a 220 foot long steamboat!

I wandered from building to building checking everything out, and thoroughly enjoyed everything I saw.  The steamboat Ticonderoga was incredible; moved here after plying the waters of Lake Champlain.  I would have loved to be a passenger on that ship! The lighthouse was cool, the unusual two lane covered bridge was fun to see, and the round barn was fascinating. 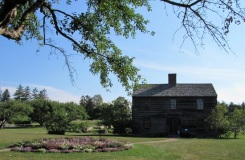 The collection currently contains over 150,000 paintings, folk art, textiles, quilts, furniture and other types of art not commonly seen in museums.  There are entire rooms of duck decoys, farm implements, dioramas, automatons, and other interesting folk art! 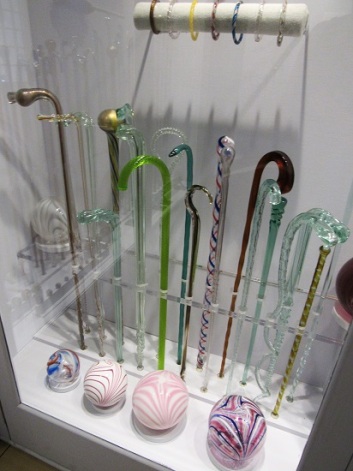 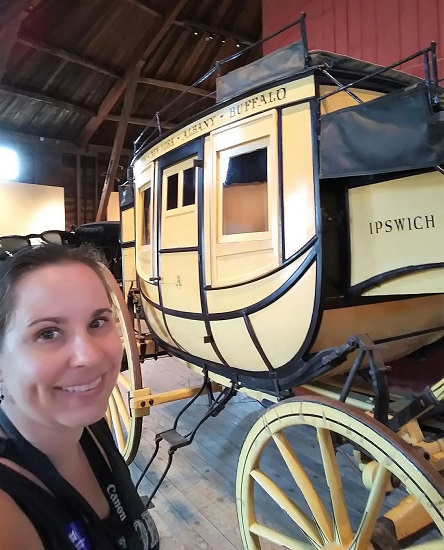 The museum is huge, with over 39 buildings total to explore.  The $25 admission is admittedly a bit steep, but they do give you a two day entry for that price, and if you have the time, there would absolutely be enough to keep you busy for two days!

The next day, I had a quiet day at the campground.  I blogged, read, took a walk and even watched a movie.  I also met Bill and Jean, a kind retired couple who were raising their three grandchildren.  They invited me over for dinner and conversation.