Mount Washington is the highest peak in the Northeastern United States at 6288 feet.  It has hiking trails, back-country skiing, glider flying, and an annual bike race.

Mount Washington is also famous for its auto road, a 7.6 mile road to the top of the mountain.  Incredibly, it originally was built as a carriage road and opened in 1861.  The average grade of the road is 11.6%, so it is a steep climb! I can’t even imagine sitting in a carriage while horses and mules pulled me up the mountain.

I picked the drive-yourself option and enjoyed listening to the CD; it explained the history of the road and features along the way.  There are pullouts where you can stop along the way for the beautiful views and to see how the forest makes way to a more alpine landscape.

At the top, there is a weather observatory.  It is fitting because Mount Washington is known for its very erratic weather.  On April 12, 1934, Mount Washington set the record for the highest wind speed in the world, at 231 miles per hour.  The record stood until 1996, and is still the highest wind speed recorded outside of a tornado or a tropical cyclone.

In the early 1900s, there was also a hotel at the summit, and the building is still here to wander through.  It was more like a hostel with several beds in a common bedroom and a communal dining room.  We must have been so much more social back then!

I had my photo taken with the summit altitude sign and checked out the view in various directions.  Even though 6288 feet isn’t that high compared to our west coast mountains, there were still some beautiful views! 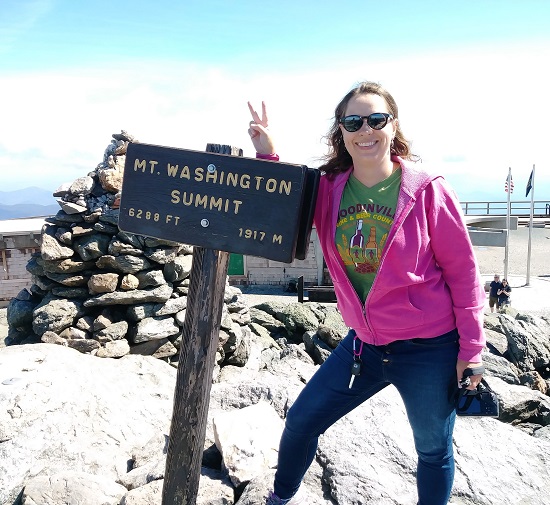 While I was up at the top, I even met a pig who was sightseeing with his owners.  His name was Tugboat and he was so cute!

The auto road was certainly a worthwhile way to spend an afternoon.  When I’m next there I will be sure to do some hiking!