The Sanatorium, by Sarah Pearse

Le Sommet is a luxury hotel located deep in the mountains of the Swiss Alps.  It is also a converted tuberculosis sanatorium.  Elin Warner is a British police detective who is on a leave of absence from her job after an attempt to apprehend a murderer goes horribly wrong. 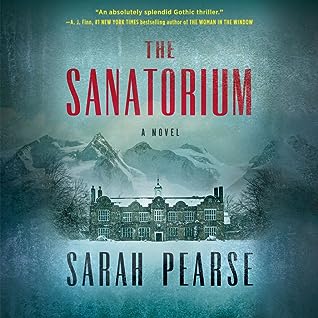 The hotel has recently opened after an extensive revisioning, fraught with conflict, protests, and the disappearance of the principal architect.

Elin’s brother is getting married, and she would like to repair their estranged relationship, as he is the only family she has left.  Elin and her boyfriend head up for a week at Le Sommet, where her brother’s fiance works.  While they are there, the road up is wiped out due to an avalanche, and the funicular is stopped due to high winds.  And then, the murders begin.

The police can’t get there, because all access is blocked.  But Elin can help, by beginning the investigation.  Does she have the nerve?

Sarah Pearse thriller takes the reader on a fast paced murder mystery with a series of twists and turns.  Don’t assume you know who did it!  She weaves the story of the hotel’s prior life as a sanatorium into her novel, making its history an integral part of the story.  Even though this isn’t a genre I typically go for, I was intrigued the whole way through!