I was excited to spend the day in Salem, Massachusetts.  It is home to historical sites extending back about 350 years!

Salem Maritime National Historic Site was the park system’s first National Historic Site; it was designated on March 17, 1938.  It preserves and interprets multiple eras in history, including the Triangle Trade (the trade in cotton, rum, slaves and sugar) between England, the colonies, and Africa, privateers during the American Revolution, and global trade after Independence.  There are several homes and commercial buildings surviving from these periods, and some are open to the public! 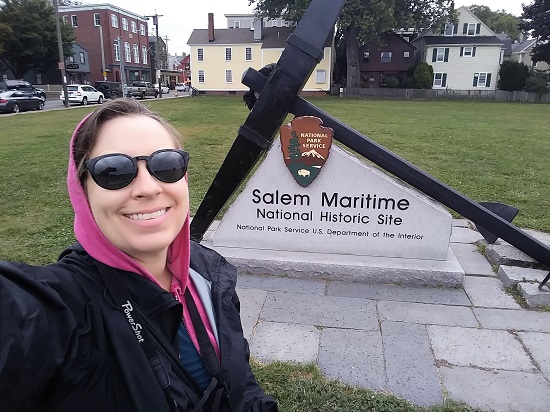 The Narbonne House was built in 1675, and is an example of the Saltbox architectural style.  Saltboxes are defined by the existence of a lean-to built onto the back of the building.  I toured the Narbonne House, and it was interesting to see, as it has not been modernized.  It was built by butcher Thomas Ives, and from 1750-1780, the Narbonne House was owned by Captain Joseph Hodges, and then in 1780 it was purchased by Jonathan Andrew, a tanner.  Descendants of Andrew owned and lived in it until 1964, when it was donated to the park service.  I enjoyed the guided tour of the first floor. 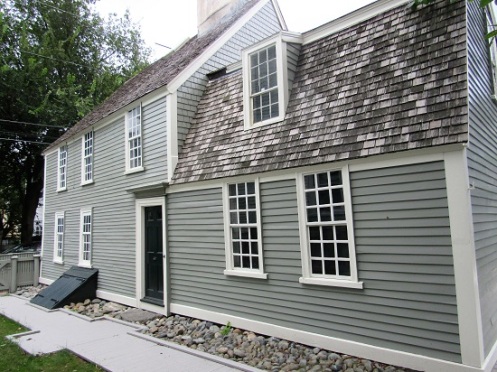 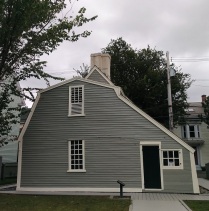 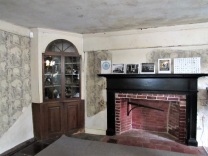 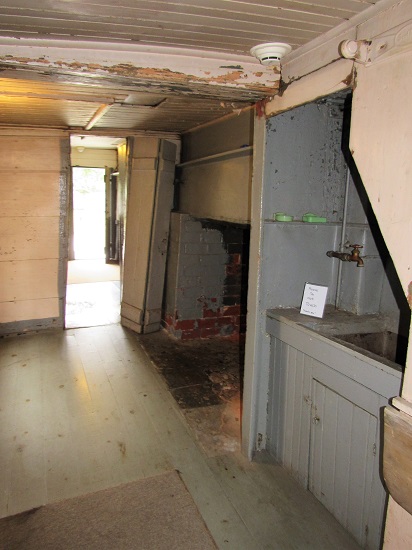 The Custom House was built in 1819; it was the 13th Custom House in Salem. It was here that taxes were collected on imported cargoes. You can see the inside on our own. Check out that gold eagle on top of the building! 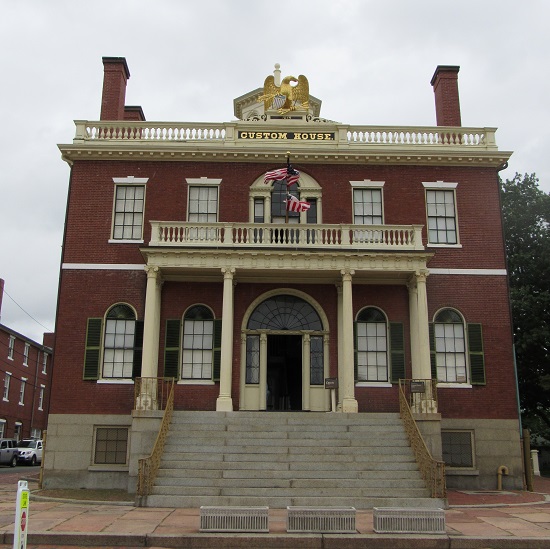 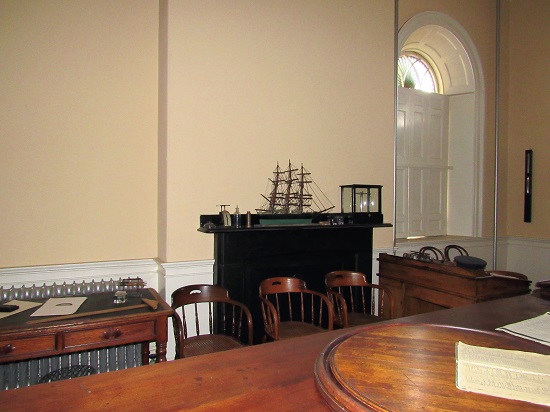 The Derby House is the oldest surviving brick home in Salem.  It was built in 1762 by Richard Derby, Sr. for his second son Elias Hasket Derby, a wedding gift.  Hasket became a successful merchant and privateer during the American Revolution, which allowed him to buy a mansion in town and sell this home in 1796. 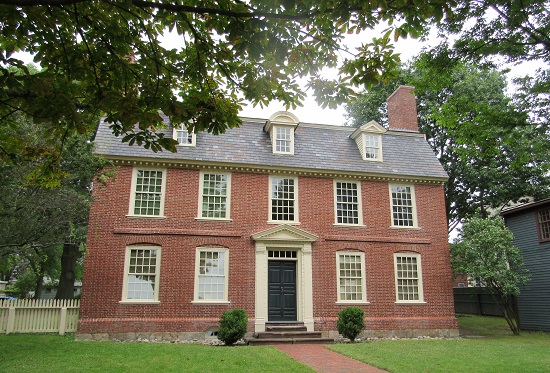 The Hawkes House was also begun by Elias Hasket Derby; construction began on the 5,000 foot home in 1780.  It was originally going to be the home that he moved his growing family into, but when the exterior was nearly finished he decided to move to an existing mansion.  It must be nice to have that kind of money! It stood unfinished and vacant for 20 years before it was purchased by Benjamin Hawkes and his business partner.  His business partner had his half of the home removed and moved, so the remaining home is the 3,200 square foot Hawkes House. 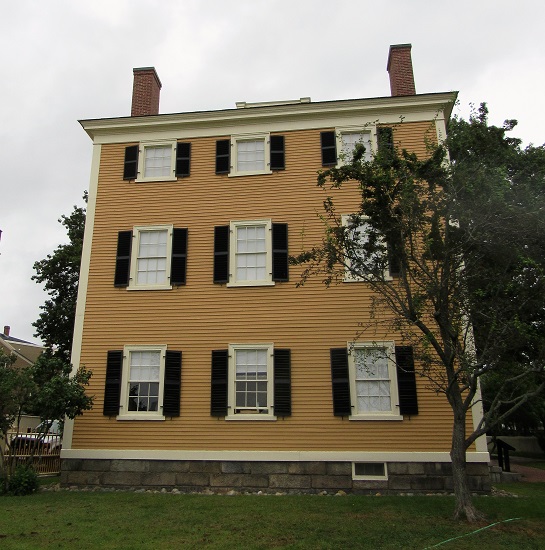 The West India Goods Store was built in 1804, and probably initially was used as a warehouse.  It operated as various stores throughout the 19th century. 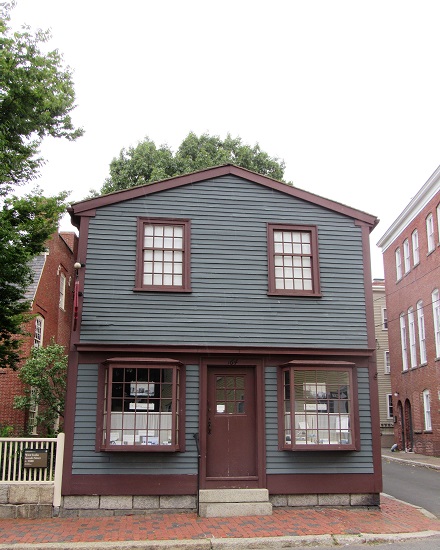 The Derby Wharf is the longest wharf in Salem, at 1/2 mile long.  It was originally built in 1762 and then lengthened in 1806.  When it was in use, warehouses lined the sides of the wharf, but they are all gone now.  The Derby Wharf Light is still at the end of the wharf though; it was built in 1871.  It is a square tower that extends 25 feet above the mean high water line.  It originally had a sixth-order Fresnel lens, the smallest order, and was one of only 17 sixth-order lenses in lighthouses around the world.  The light still operates today when a red flashing automated beacon. 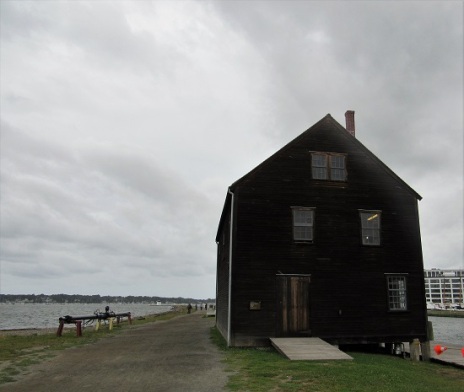 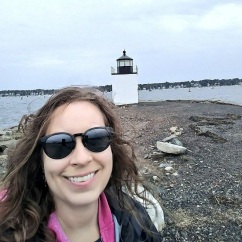 I had lunch at the Brodie’s Seaport restaurant.  I had a Sam Adams Oktoberfest beer (it seemed fitting for Salem, Massachusetts) and fish and chips. 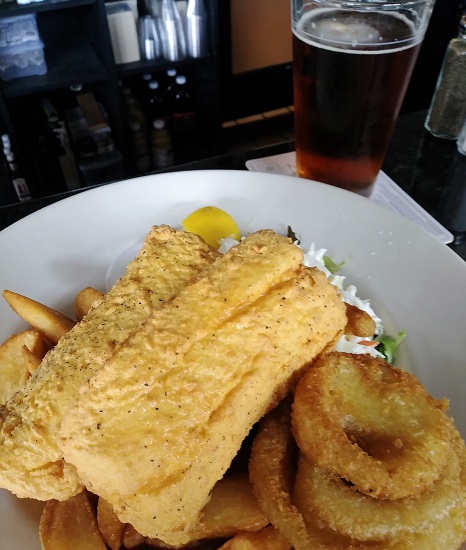 I also had a chance to wander one of Salem’s original cemeteries, and see the memorial garden that honors the victims of the Salem Witch Trials in 1692.  I find it interesting to ponder the circumstances that led Salem’s residents to ostracize and persecute their neighbors.  In writing this, I see similarities between what happened there and the climate in the United States today.  Those who do not understand history are doomed to repeat it.  We best be careful to not continue down this path. 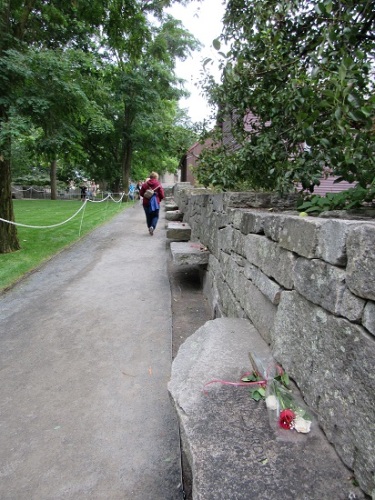 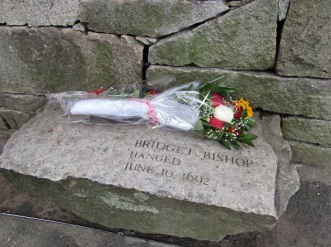 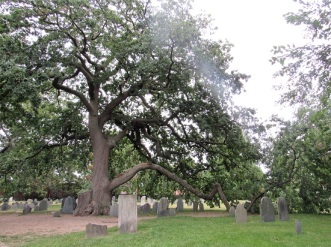 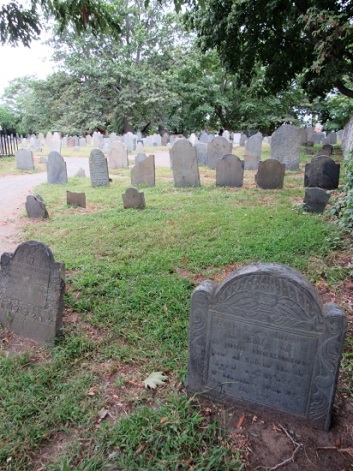 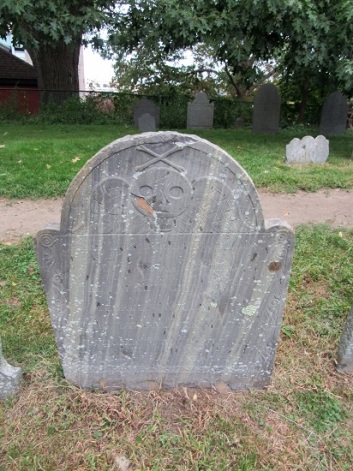 I would love to return to Salem and see more of its history, and visit more of the Salem Witch Trial sites.  There is never enough time on a trip! 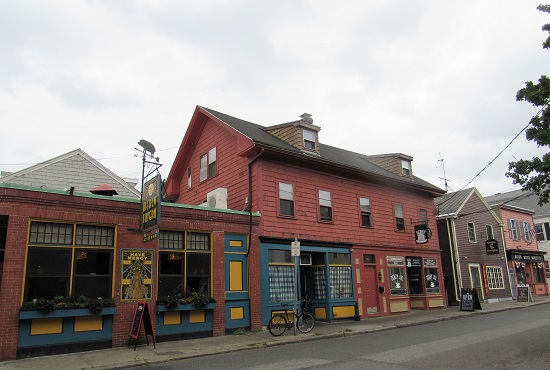 I ended my visit with a trip to the National Historic Site’s Visitor Center to get my passport stamp and see the exhibits.  It was interesting to connect the sites that I saw with a bit more of the context!

I also visited the House of Seven Gables; the home that inspired Nathaniel Hawthorne’s book of the same name.  I’ll post about that next!

I never read this book when I was younger.  I didn’t even know it was written by Nathaniel Hawthorne, probably due to some mental mix-up with the Anne of Green Gables book, which seems so much more cheerful than anything Hawthorne would write.  I mean he did write The Scarlet Letter, with all those uptight Puritans. 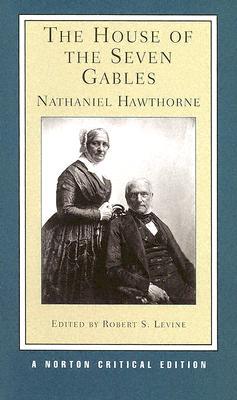 But then I went to visit the House of the Seven Gables, in Salem, Massachusetts, where Hawthorne lived for a period of time with his relatives.  It was built in the 1600s and was the inspiration for the home in his book.  The gift shop was selling copies of the book, with a little stamp that indicated you bought it at the actual House of the Seven Gables.  And it was only $11, so I bought myself a copy.  Now I wish I would have read the book before visiting the house, but there’s nothing I can do about that.

First things first.  19th century literature is a challenging read.  Oh boy…  We think we are so smart these days with our constant connectness, but writers back then really poured in all the vocabulary words they had ever learned.  And the descriptions!  So much of the book is based on description, rather than action.

The novel centers around a cast of characters from the Pyncheon family, of whom three, an elderly sister and brother, and their barely adult niece, live in a 200-year-old home.  It was built by an ancestor of theirs and is rumored to be cursed.  The book alludes to, but never states outright, that the ancestor accused the original owner of the land of witchcraft in order to buy his property on the cheap after he was executed.  So that man did what any good witch would do and issued a gallows curse on his accuser.  I mean, even if you weren’t a witch, you are about to be executed, wouldn’t you be tempted to pop off and see if karma might have your back?

Fast forward to the mid-1800s, and the elderly residents of the home are poor and anti-social, hiding out like hermits until their young, fresh niece comes along to breathe some life into the place.  As the plot goes on, there is the constant theme of where is the money hidden, in the form of 200-year-old property deeds on long-contested land that would make the rich relatives richer and the poor ones, well, they probably wouldn’t see a dime.

So there you go.  Murder, mayhem, Puritans, witchcraft and a pretty, young maiden to save the day.  There’s a love story in there too of course, and a few twists to keep you guessing.  A good story if you can keep your eyes focused through all that prose.

Note: The photo above is not the edition I read, but this book has approximately hundreds of editions and versions and I’m lazy and just picked one of the photos instead of trying to find the version I read.  So there.

Everyone has heard of the Salem Witch Trials. The unfortunate blight on our history that resulted in the executions of 20 people, proclaimed to be witches by the “evidence” of the day.

Kathleen Kent’s historical novel explores the family of one of the accused and executed women, Martha Carrier, from the perspective of her daughter, Sarah Carrier. Sarah was arrested and interrogated, and imprisoned for several months, but was ultimately set free.

The novel explores the themes of religious intolerance and persecution that existed in 17th century colonial Massachusetts, as well as the deep divides between families and neighbors that undoubtedly contributed to the naming of several hundred innocent townspeople. 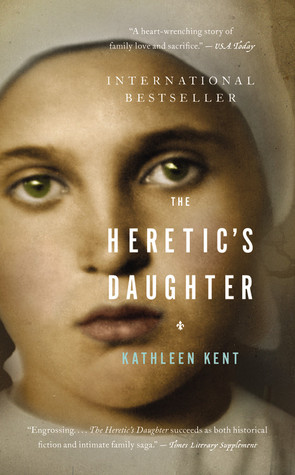 The Heretic’s Daughter, by Kathleen Kent

The book also deals head on with the conflict that exists between a mother and a daughter coming of age, in what must be a timeless struggle. Sarah Carrier resents her mother, always assuming that family disagreements must be her mother’s fault. She only learns to appreciate her mother’s fierce loyalty and wisdom once it is too late to rebuild those bonds. Through reflection, she realizes too late that perhaps her mother might have been right.

Kent doesn’t deeply explore the complex reasons for the Witch Trials, but keeps her novel within the historical context with accurate representations of what is known about the players involved. She is skillful at describing Sarah’s surroundings, what it must have been like growing up in the farming community of Andover, Massachusetts, and the horrific experience of confinement in the Salem Town jail, crowded with so many people, and unable to escape the filth, disease or chill.

Kathleen Kent is a 10th generation descendent of Martha Carrier, so she provides a unique perspective, and has clearly pulled from the historical documents that have survived from the trial. The novel is well written and well researched, and pulls the reader into the story from the beginning to the very end.