In my last post, I shared several photos of the gorgeous bison at Yellowstone.  Although bison are the most plentiful large mammals in the park, they are not the only wildlife, and I had the good fortune to see many others.

We saw about a half dozen elk, enjoying the “elk candy” grass at Mammoth Hot Springs. 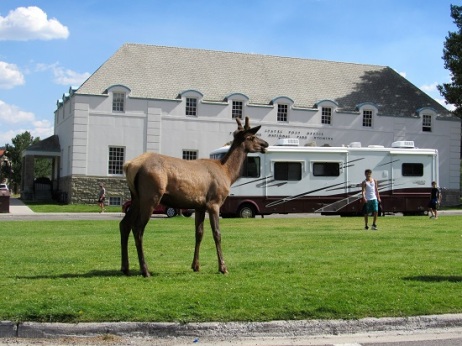 Tourists getting too close to the elk

A mama elk with her calf

Yearling Elk – with crazy Tourists (FYI – I was in a car, with a high zoom…) 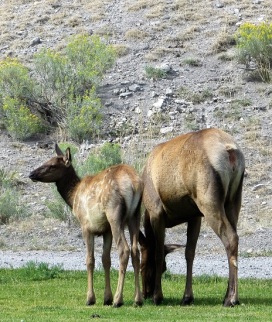 Mama elk with her baby! With spots!

We saw lots of birds, including Trumpeter Swans 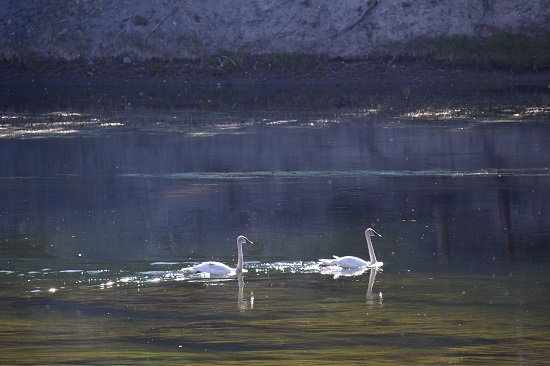 A raven just getting out of the bath… 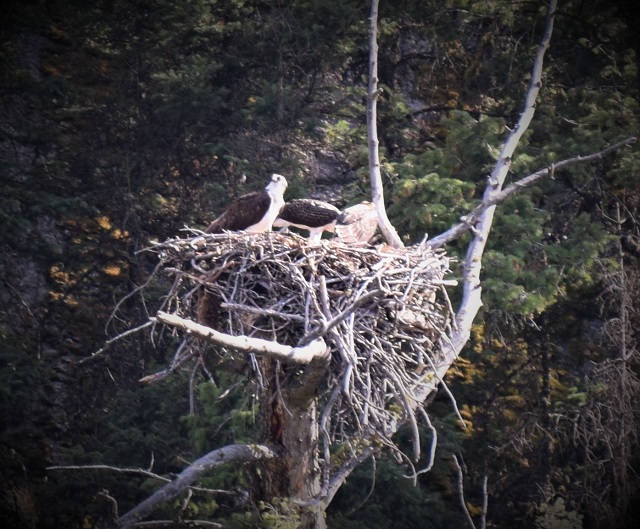 An osprey nest with young ones!

We saw some butterflies, but they mostly didn’t slow down enough for a photo…

I believe this is a Comstock’s Callippe Fritillary

We didn’t see any bears, but they are around! 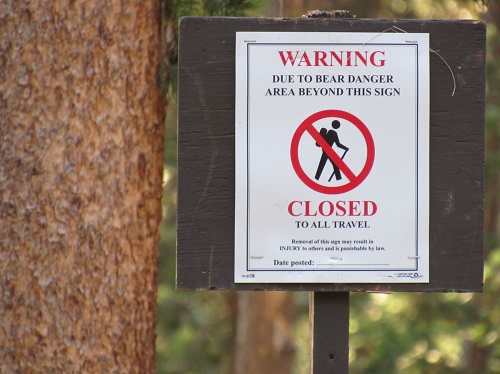 We didn’t see any bears – just a few closures signs

And we were treated to the distant sighting of two Gray Wolves.  One was black (in the center of the photo) and the other gray.  This was the first time I have ever seen wolves in the wild – what an amazing experience! 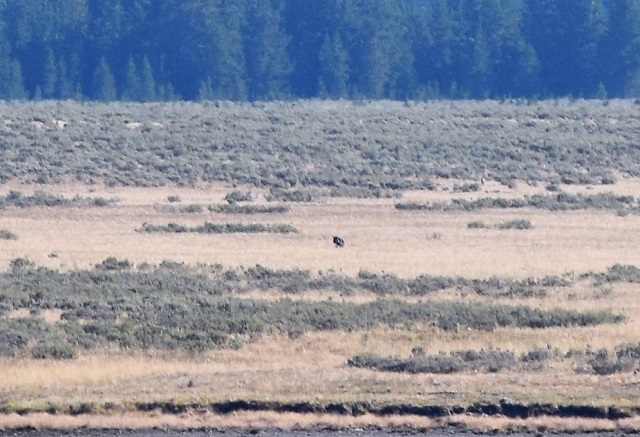 We saw two wolves – they were very far away, so this is the best I could do in photos…

Yellowstone was an unforgettable experience for me, with my love of animals.  I am so excited for my next trip there!

Our Colorado trip so far had been filled with National Parks, but today we made plans to do something a bit different!  We instead headed out to go to St. Elmo, Colorado – a ghost town!

On the way, we made quick stops at two historic schoolhouses. The Nathrop School was built in 1881, and had a lovely bell tower. The story goes that the bell was cast in St. Louis, Missouri, and had to be melted down and recast three times before it created a suitable ring – one that could be heard for miles. The Nathrop School closed in 1946.

The Gas Creek School was built in 1890, and was used as a school until 1942. It is unique because it features separate doors for boys and girls, and has a huge Cottonwood tree in its front yard.  It is now privately owned; it is located on Highway 285, between Salida and Nathrop.

After the schoolhouses, we made our way up a small mountain road to St. Elmo.  The road begins as a paved two lane country road, but eventually becomes gravel – that said, it is a smooth, well-maintained gravel road.  St. Elmo was a mining town; it was founded in 1880, and most of the surviving buildings in the town are from 1881 – 1882.  It sits at an altitude of 9,961 feet.  Silver and gold were both mined here, and for a while, it was extremely profitable. The longest running mine – the Mary Murphy, operated until 1922 and mined an estimated $60,000,000 in gold.

The General Store in St. Elmo

‘As is the case with most mining operations, eventually the ore gave out and the community began to dry up and die away. St. Elmo began declining significantly after the departure of the railroad line feeding the town in 1922; the last residents finally gave up the ghost in the 1950s.  St. Elmo was listed as a Historic District on the National Register for Historic Places in 1979. 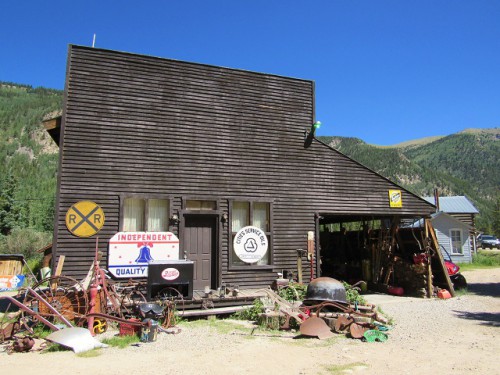 The unique thing about St. Elmo is its state of preservation – the buildings are maintained here in a state of decay, but not restored.   There are also many more buildings than you will find in most ghost towns.  St. Elmo today has some homes that are used as summer homes, and some year-round residents operate a general store and an Inn, but that is the extent of its current business presence – it is very much a ghost town. Jeeps and ATVs use the old mining trails for off-road adventures, and fishing is popular in the area as well.

An old home in St. Elmo 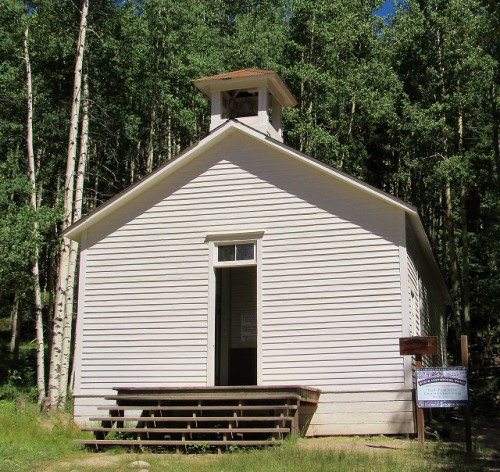 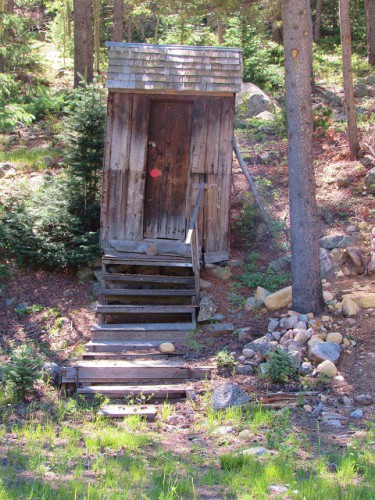 An old outhouse in St. Elmo

We spent about an hour wandering around taking photos of all the old buildings; there is an old school, shops and stores, and lots of homes. St. Elmo also has a different kind of summer resident – hummingbirds.   I think they were Broad-Tailed Hummingbirds.  I was able to get some good photos of them, thanks to the feeders put up by the owners of the general store.

We also saw tons of Least Chipmunks and several Wyoming Ground Squirrels – the Chipmunks have been conditioned to eat sunflower seeds right out of your hand. I didn’t feed them myself, because I don’t like to contribute to the taming of wild animals – it just causes too many issues when they become acclimated to and dependent on humans. But I have to admit I took photos of them begging for seeds and clambering around the pile of sunflower shells, because they were pretty cute. I got a nice photo of two Ravens sitting on a fence too.

Common Ravens sit on a fence in St. Elmo

What’s that? I have something on my chin, you say?

After our fill of cute animals and old buildings, we got back on the road to Leadville!  We passed a couple more historic one-room schoolhouses, and Jon and his parents humored me by letting me get pictures.

The Maxwell School (also known as the Mt. Princeton School) was built in 1889, and used until 1933.  It was made with handmade concrete blocks – if you look closely at the blocks you can see the hand and fingerprints – unfortunately that kind of detail doesn’t really show up in the photos.  It has been stabilized, and there have been attempts to preserve it – the roof has been replaced and so have the windows, although it is currently boarded up to protect it from vandals. 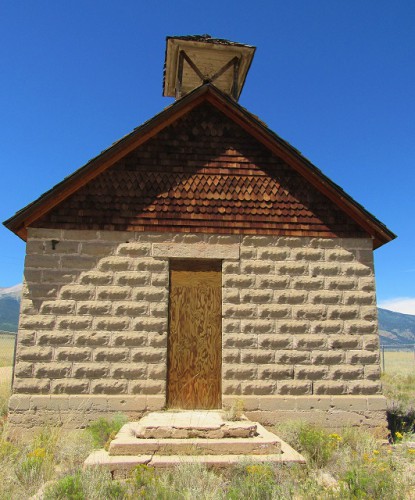 The Maxwell School, also known as the Mt. Princeton School, outside of Buena Vista, Colorado. Built in 1889; closed in 1933.

I could not find any information on this old red school outside of Leadville, except that it may have been built in 1902, but I love its bell tower and bright color.  It has clearly been painted somewhat recently.

We were almost to Leadville and I was starving!  I’ll tell you about Leadville next!