In February, Paula and I did a repeat of our snowshoe weekend.  We spent two nights at Mount Rainier over the President’s Day holiday.  It was glorious!

Last year, the road up to Paradise was closed the entire time we were there, due to avalanche danger and rain.  This year, we were able to drive up to Paradise and snowshoe up there!  We got up early and headed up early, driving up just after the road opened.  We were the first ones out on most of the snowshoe trail, and had the opportunity to snowshoe through fresh, unbroken snow! 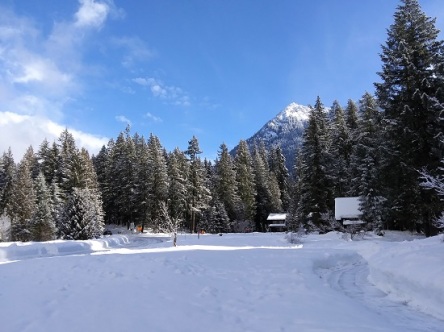 Rainier from the National Park Inn 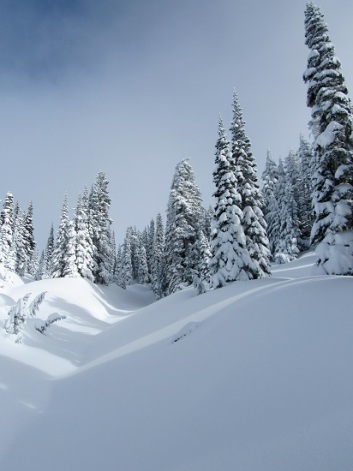 As we say in the PNW, the Mountain is out!

I can’t get enough of this. 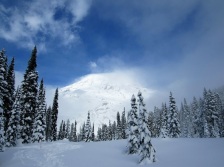 Me on the trail

That morning, we hiked out under a partly cloudy sky, with a spectacular view of Mount Rainier!  It was so beautiful!  We took lots of photos and selfies, because when you grow up around mountains, you know that the mountain isn’t always out, and you take advantage of the view when you can get it.  I love seeing this view!

We snowshoed out a bit further in the fresh snow, and on our way back noticed that Mount Rainier was now obscured by the clouds.  We were lucky to have gotten out there when we did – there is a benefit to being the early bird! 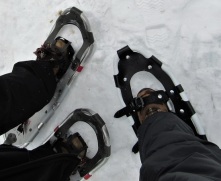 That afternoon, we snowshoed around the Trail of the Shadows, an easy 1 mile flat loop trail. I love it because it takes you by an old turn of the century cabin, originally built by the Longmire family, as well as remnants of the old mineral baths – they were advertised as having healing properties, if you could stand to soak in the sulfur smelling waters. 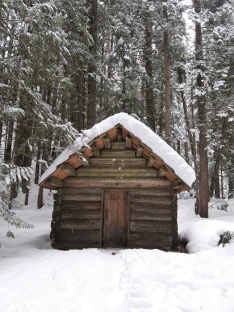 We renewed our ritual of sitting on the porch to drink spiked hot chocolate and wine, and also had a good time working on a new puzzle in the game room and making new friends.  We had grass-fed burgers and blackberry cobbler.  Both were to die for!

My burger at the National Park Inn

Me and my owl hat! 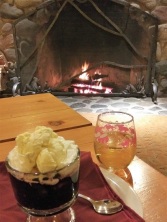 Blackberry Cobbler – to die for!

There was one piece missing

We were sitting on the porch just after they closed the gate to Paradise at 6 pm, and Paula spotted a critter making his way near the road.  We watched him trot across the road and realized it was a fox!  It was too dark and we were too far away for photos, but he was so adorably cute from afar!  This may be the first time I’ve ever seen a fox in the wild too!  Our room this year overlooked the road in the front of the hotel – it is so pretty there!

The view from our room

The bridge at Longmire 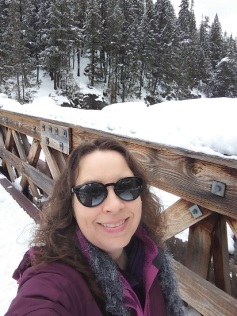 Me on the bridge at Longmire

I certainly hope that we continue this tradition, either just the two of us or with other friends as well!  It was so much fun!

The second day of our weekend in Leavenworth in July, Jon and I got up and got moving so we could make the most of our day.  Last fall, when Jon drove over to meet me in Chelan, he had seen an antique store that had interested him.  He mentioned it to me and asked if I wanted to check it out.  Well, DUH, that’s a silly question!

Our first stop was at the Antique Mall at Cashmere (kind of a non-descript name if you ask me), one of the large antique malls in Cashmere, just off the highway.  The outside of the store had a lot of architectural salvage that was cool; old window frames, old doors, various garden implements and signs, and we stopped to rummage through that stuff for a few minutes before going inside.

Inside the store was a lot of the usual antique store stuff – lots of glass, lots of vintage collectibles, lots of little children figurines, and some really neat stuff too.  And then I saw it… The score of the trip…  A very large (14″ diameter) glass fishing float.  I have admired them for years, but I have never purchased one because they are so expensive, and I have never found one on a beach.  But this one was reasonably priced, so I jumped at the chance!  It even has some netting on it.  I know nothing about it though, so I will have to do some research at some point…  In the meantime though, I just like seeing it perched in on the living room floor.

Jon found a vintage record cabinet that he loved, and it was also priced to sell.  It was small enough to fit in our Honda CRV with all of our other trip gear, so it went home with us too.

After the Antique Mall at Cashmere, we stopped by the other antique mall – Apple Annie’s.  This place is gigantic, with over 70,000 square feet and a restaurant in the building.  The building is new, so it has a different feel than many antique malls that are in old buildings with uneven, creaky floors and poor lighting.  Jon saw a 1950’s style coffee table that he liked, but there was nothing there that we had to have.  We cruised through the last several aisles quickly because we were getting hungry, and we were going to meet the family for lunch in downtown Leavenworth.

Leavenworth was a zoo that day.  There were so many people everywhere!  Jon got pretty frustrated with the crowds…  Plus it was really hot!  For lunch we had brats, pretzels and water at the Leavenworth Sausage Garten.  I had a regular Bratwurst and Jon had a Veggie Brat – they were both delicious.  We split one of their pretzels, which was awesome!  The seating is outdoors, with umbrellas over the tables to provide some shade in the summer, and outdoor propane standup heaters to give some warmth in the winter.  The day we were there, the misters were spraying a light mist of water on us, keeping us a little cooler.

The Main Drag in Leavenworth

After our brats, we checked out the shops in downtown Leavenworth, and thought about a visit to the Nutcracker Museum.  Those of you who read this blog know that I am a sucker for a museum, and I have heard that the Nutcracker Museum is good – I just wasn’t in the mood for a museum after poking around in antique stores for hours.  I’ll be back at some point though.  We did make a visit to the Icicle Ridge Winery tasting room, located in the basement suite of one of the main street buildings.  Surprisingly, there was no one else there when we went to do our tasting.  I’ll talk about Icicle Ridge in another post!

After a bit more wandering around, we decided it was time to head back to the cabin to beat the heat in the river.  100 degrees was too hot for any of us to handle!  We got our swimsuits on and jumped into the ice cold Wenatchee River.  Our cabin was just below a section of rapids that made an interesting “bathtub drain” effect in the water. 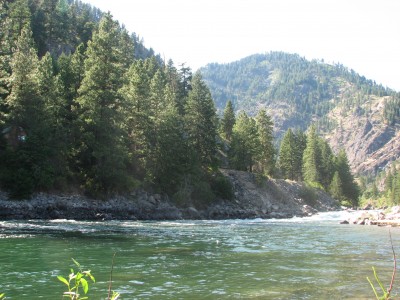 The Wenatchee River, Looking North Towards the Rapids

When you first jumped in, you would be pulled towards the rapids to the north (the rapids were uphill though, so you didn’t go tumbling over any falls or anything).  Then you would swim further out into the river, to be caught up in the rush of water that would quickly carry you south past the cabin.  Once the speed of the water slowed down, you could swim closer to the riverbank again where the river would carry you back to the north once again where you could get back out of the current near the cabin.  It took some strong swimming, but it was pretty fun going through the cycle!

We all enjoyed a dinner of BBQ’d steak and chicken, with salad, green beans and other sides, and chatted the evening away around the table.  The highlight of the evening though was seeing a black bear come down to the water on the opposite riverbank!  He wasn’t fully grown, but old enough to have been weaned from mom.  What a treat to see him!  He was far enough away to not make you nervous (on the other side of the river was good for me), so unfortunately with the low light it was hard to get great photos of him.  I will remember the experience though!

We Saw a Black Bear!

A fantastic day in Leavenworth ended with a dip in the hot tub (the temps drop fast when the sun sets) and a puzzle spread out on the coffee table in the cabin.  Can’t wait to visit again! 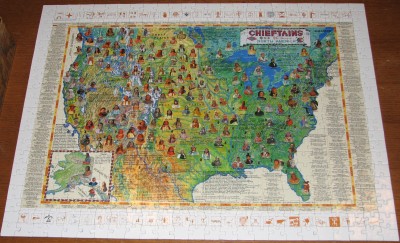 Our Evening Puzzle Project – Of Course it has a History Theme!