Mistress of the Ritz, by Melanie Benjamin

This book was another pick from the “available now” section of audiobooks on the library website.  I hadn’t heard of the book, or the author, and wasn’t quite sure what to expect. 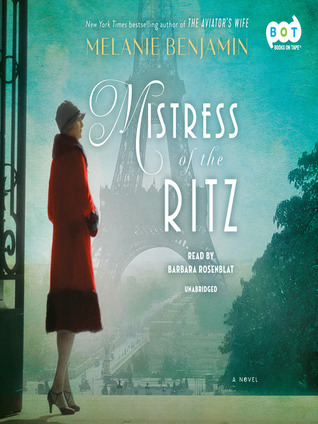 Blanche wanted to be rich and famous – she was going to make it as an actress!  She arrived in Paris in the early 1920s with her silent film star friend Pearl White, and met the assistant manager of the Hotel Claridge, Claude Auzello, when they checked into their rooms.  Claude found out that in a weeks’ time, Blanche was set to rendezvous with her paramour, Egyptian Prince J’Ali Ledene; he set about to sweep Blanche off her feet by showing her Paris.  And it worked…

Blanche and Claude married, and he jump-started his career with a move to The Ritz Paris, where he secured the role as Hotel Manager.  Their lives were wonderful until the Nazis came and set up their headquarters in the Hotel Ritz.

The book is a story of secrets, and a marriage built upon those secrets.  Their marriage crumbles, as Claude takes a mistress, and Blanche begins working clandestinely for the French Resistance.  But even more so, it is a story of love.  Love tested by hardship and betrayal, and love that blossoms in the most unexpected of places.

It wasn’t until I finished the book that I learned that Blanche and Claude Auzello were real people, who navigated their way through the French Occupation while living right underneath the noses of the Nazis at the Ritz.  The framework of Blanche’s life is known, but Melanie Benjamin filled in the gaps in this wonderful historical work of fiction.  A must read for lovers of historical fiction, and World War II history.