As I drove toward Springfield, Illinois I was lured away by the sign announcing Lincoln’s New Salem State Historic Site.  My eyes lit up…  New Salem!  (Note: Does this not happen to everyone?!!?)

New Salem was the town where Abraham Lincoln lived as a young adult, between 1831 and 1837, while he was in his twenties.  During that time he worked as a boatman, a soldier in the Black Hawk War, a general store owner, postmaster, surveyor, and of course, what he is most known for in his young life – a rail-splitter.  It was here that he was first elected to the Illinois General Assembly.  New Salem is also where he met and fell in love with Ann Rutledge, the young woman who many believe was the true love of his life.

New Salem as an actual town no longer exists.  It had a very short life; it was founded in 1829 and it was abandoned by 1840, in part because the nearby Sangamon River was not well suited for steamboat travel, and after the county seat was located in Petersburg people just naturally drifted away.  During its existence though, between 20 and 25 families lived in New Salem, and it was an active commercial center.

In the 1930s, the Civilian Conservation Corps (CCC) reconstructed New Salem, using the original foundations and historical information about the town and what it once looked like.  There are 22 recreated structures, from homes to the types of businesses that once existed there.  One log cabin is original – it was built in New Salem, moved at some point to Petersburg, and later moved back to New Salem when the village was reborn.

I arrived in time to have a late lunch and see the village.  I purchased my admission and checked out the museum first.  The museum has artifacts on life in New Salem, information about Lincoln’s time and experience here, and of course, they dive into the Lincoln/Ann Rutledge saga.

There are conflicting opinions on Lincoln’s relationship with Rutledge.  Some believe that Lincoln held Rutledge very close to his heart and was interested in marrying her.  Others believe that their relationship was simply a friendship, and that Lincoln’s affectionate way of writing about her was simply because he wrote the same way about everyone he cared for.  There are also those who believe that William Herndon, Lincoln’s former law partner, spun up the Rutledge story after Lincoln’s assassination in order to take a jab at Mary Todd Lincoln, whom he despised.  We will probably never know, and perhaps all that is known is that Rutledge died in New Salem in 1835 at the age of 22, and that Lincoln sunk into one of his many severe depressions after her death.

The village site itself is amazing.  The reconstructions are very well done and look like the original (I think – given that I wasn’t around to see the original).  It probably helps that these reconstructions aren’t too far from their 100th birthdays…  They are decorated with period artifacts and there are period costumed docents stationed at various places to answer questions and tell you about what their lives would have been like when Lincoln lived here.  One young woman told me that she was refusing to go inside her home because she had been surprised by a snake inside the previous day!  Things we don’t have to consider in Western Washington, but I would have liked to have seen the snake! 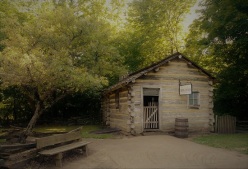 A lean to building

New Salem Outhouse – it has a lid!

I enjoyed wandering around and checked out all the buildings.  The village contains homes, a post office, a general store, a blacksmith shop, and various other businesses reminiscent of the time period.  Even though Lincoln did not work in these buildings, the post office and general store he worked owned would have been similar to these reconstructions.

I took my time, checking out the interiors of each building, enjoying the leisurely afternoon!  There were lots of butterflies and bees on the flowers, and New Salem even has a horse!  It was a great place to learn about Lincoln’s young adult life!