Our second day in Olympic National Park was a big day.  We were going to spend the day in the Hoh Rain Forest!  We got up super-early (5:40 am!) to make the several hour drive from Sequim over to the rainforest.  The night before, we had gone to the grocery store, and made sure that we would have enough snacks for a long day of driving and hiking – plus a new sweatshirt for me because I forgot to bring a warm sweatshirt from home.

We headed out from the hotel in the dark.  At the beginning, there was some misty rain – we chatted about how much it would suck to spend the whole day hiking in the rain.  But soon enough, it gave way to a beautiful morning!  Our first stop on the drive was at Lake Crescent, which is about 17 miles west (and slightly south) of Port Angeles.  Lake Crescent was created during the last Ice Age when the glaciers carved a deep valley; it drained into the Elwha River, which is one of the major rivers in the park.  About 8,000 years ago, there was a giant landslide that created a second lake, Lake Sutherland, and cut Lake Crescent off from the Elwha River.  Fish were trapped in the lake and began to evolve; today there are two subspecies of trout that are genetically distinct from nearby trout.

The moon over Lake Crescent

We were at Lake Crescent just after sunrise, and the lake was absolutely beautiful.  The water is a deep, clear, turquoise blue, a result of the lack of nitrogen in the water, which inhibits the growth of algae in the lake.  Lake Crescent is officially the second deepest lake in Washington state (the first is Lake Chelan), with an official depth of 624 feet.  However, unofficial depth surveys have recorded depths of more than 1,000 feet!

After our quick stop at Lake Crescent, we continued on our way to the Hoh Rain Forest.  The Hoh Rain Forest is one of the United States’ temperate rainforests, with average rainfall of 140 – 170 inches of rain per year.  That’s 12 to 14 feet!  I know some of you think that it rains a lot in all of Washington, but to give you some perspective, Seattle receives an average of 36 inches per year, and New York City receives 45 inches.

Welcome to the Hoh Rain Forest!

When we got to the forest, we stopped off at the Hoh Rain Forest Visitor’s Center and got our National Park Passport stamps (one of their stamps is a banana slug!) and set off for a hike.  We started off in the Hall of Mosses, an easy 0.8 mile jaunt near the Visitor’s Center, with signs letting you know which species are out there, and information on the rainforest ecosystem.

The Hoh Rain Forest is dominated by Sitka Spruce and Western Hemlock, which grow to extreme sizes because of the abundant rainfall.  The Hall of Mosses shows that there are many types of mosses and lichens too; the lettuce lichen is a favorite of the deer and elk in the forest.  Animals in the Hoh Rain Forest include deer, Roosevelt elk, black bear, cougar, bobcat, tree frogs, spotted owls and of course, the banana slug. 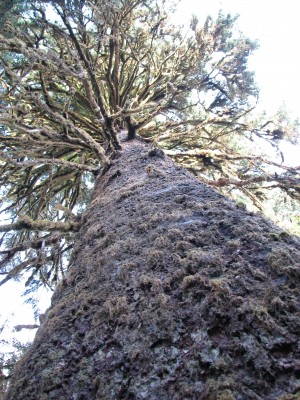 These trees in the Hoh Rain Forest are massive!

That’s a lot of Moss! 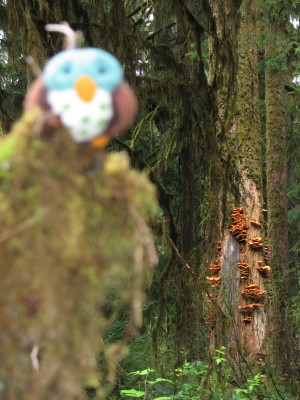 After enjoying the Hall of Mosses, and watching Jon play with the camera for awhile, we hiked out the Hoh River trail, a trail that stretches for over 17 miles near the river.  You can hike out and camp if you want, or you can head out as far as you want and then turn around and come back.  There are several small trails that lead to the river, and after running into some other hikers who tipped us off to where the elk were, we took one of the small trails over to the river and found a herd of elk grazing and sleeping along the banks of the river.  We watched them for awhile, trading the camera and the binoculars back and forth.  Seeing the elk was really the highlight of the rainforest for me!

When we were there, we were mostly alone.  We ran into other hikers about every 15 or 20 minutes, but otherwise, it was just us.  It is not a difficult hike either, with most of the first several miles relatively flat.  And even better, the whole time we were at the Hoh Rain Forest, there was no rain!  I have no idea how that happened, but we certainly lucked out.

When you are tryin' to act casual while beggin' for breakfast service... #Caturday #catsofinstagram #cats #weekendvibes
You know it is fall when the puzzles come out. Beer caps from mostly beers I've never heard of! #beercaps #puzzles #fall
Photo ball practice on the Cle Elum river. It was nice to spend some time relaxing... #PhotoOfTheDay #photography #vacation #PNW #Washington #summer
Did some playing with the photo ball at the cemetery today. So pretty! #Roslyn #cemetery #PhotoOfTheDay #photography #vacation #PNW #Washington
Just a bit of day off, back roads exploring... #easternwashington #vacation #CleElum #girlstrip
Saw this young lady as I was leaving for work the other morning... #Deer #wildlife #PNW #morning
Oysters, fish tacos and cider, oh my! Enjoying all the good holiday weekend grub! #girlsday #SundayFunday #HolidayWeekend #LaborDay2021 #summer #PNW
Fun evening cider tasting with the girls! So many good ones! #cider #craftcider #girlsnight #SaturdayNight
I love our gorgeous sunsets! Amazing evenings with good friends and this view! #beautiful #sunset #PNW #Friends #bookclub #Reading
Love my beautiful friend! It is always so nice to catch up! #girlfriends #girlsday #SaturdayVibes #weekendvibes