Valiant Ambition: George Washington, Benedict Arnold, and the fate of the American Revolution, by Nathaniel Philbrick

Despite being very interested in history, I haven’t spent much time on the Revolutionary War. Maybe it is the stockings… or the wigs… both things I have a long-standing aversion to. Just ask my mom about the time when they dressed me up as Princess Leia in Star Wars, complete with the funny buns on the side of my head. I was about five, and I don’t have much hair, so she did the hairstyle with a wig. Which I removed and refused to put back on about two houses up the street. Times have not changed… 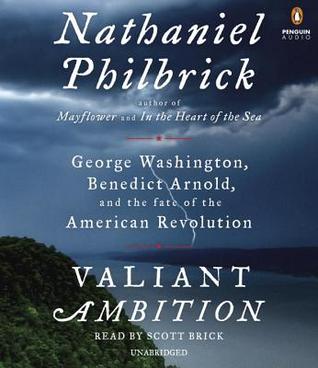 But anyway, back to the book. As one might now have guessed, this is a book about the Revolutionary War. It weaves its way through various parts of the war, from Washington’s struggles at the beginning, to Benedict Arnold’s glorious victories early on, to later events where Washington changes his strategy and starts seeing success. And of course, it recounts Benedict Arnold’s eventual treason and defection to the British Army.

It is a fascinating overview of the long years of the war, hitting several highlights for the Northern, Central and Southern corps of the Continental Army (they were called something else, but you get the gist). It tells the story through the perspective of several officers on both sides of the conflict: Washington, Arnold, Gates, Cornwallis, the Marquis de Lafayette, as well as weaving in stories of some of the soldiers who were fighting on the front line.

While Philbrick follows a generally chronological timeline, he does bounce forward and back some as he shifts between storylines. The reader should also be aware that the book is not intended to be a complete history of the Revolutionary War, with Philbrick covering some portions and leaving others out entirely. Of course, a comprehensive history would be far outside the scope of one book, but he does seem to pick and choose which events he portrays, and some seem less relevant that others. I say that even knowing that the book is focused on Washington and Arnold…  That said, it is a worthwhile read that gave me a good general overview of some of the major points in the war that founded our country.

Extra points for the fact that the audio-book was read by Scott Brick, one of my favorite readers!