Missing 411: Off the Grid, by David Paulides

I love these books; he has a whole series of them, and even a movie.  Not because I believe in his quirky Bigfoot, alien abduction theories, but because he compiles details of missing people who have disappeared in wilderness areas.  As I dream of a second career as a successful sleuth, who goes back-country hiking in my free time, I find these cases so interesting.  He combines the details of the case, some of them being decades old, and interesting descriptions of wilderness areas all across the U.S. 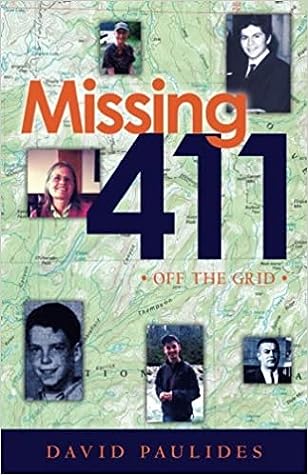 Paulides ties his missing persons cases to a pattern, including the fact that they are mostly men, generally disappear in wilderness areas, disappear in bad weather, and disappear near water.  He also ties his cases to specific hotspots, where a large number of cases crop up over time.  And although I don’t necessarily agree with his conclusions, I do agree that these cases are often puzzling and mysterious.  Of course, there are always going to be some number of missing persons cases that are unusual, and I tend to believe that is why some of these people are never found.  But you can’t deny that some of these cases are downright weird!

Worth the read if you are interested in true crime and missing persons cases.

I have been hearing about David Paulides and his books for a while. And I have been curious. This former law-enforcement officer (with rumors of a checkered past) turned author has spent the last several years compiling information about missing people across the U.S. and the world. He claims that there is a pattern of disappearances with very specific sets of circumstances linking them, and believes there is some as yet unexplained phenomena that is causing the disappearances. He never comes right out and explains his theory, but at various points in the book he alludes to Bigfoot, alien abductions, fairies, and a race of mysterious little people that are described in the folklore of Western Native Americans.

I think he’s a nut. Just because he was a cop, doesn’t mean he was a good one. Many of the things that he points to as “baffling” have logical explanations – explanations that he discounts as being impossible. He also only presents missing persons cases that fit his “profile,” meaning that he completely ignores thousands of other missing persons cases. He also acknowledges that many of these disappearances occur in very rugged terrain, but then states that it would be very unusual for someone to disappear there. Umm… you just got done telling me about how rugged these places are!

Missing 411: The Devil’s in the Detail, by David Paulides

Here are the “patterns” that are present in many of these cases, that Paulides believes lend credibility to his theory, and my refutations:

Bad weather – Paulides states there is often bad weather during or immediately after the disappearance that hampers search efforts. Well yeah – the many people who go missing during good weather are more easily found – therefore they don’t fit his “profile.”

Dogs don’t pick up the scent – See above bad weather. Rain and snow make it harder for a dog to pick up a scent.

Berries and Mushrooms – Paulides claims there are lots of disappearances of berry and mushroom pickers, or people who go missing near berries. Hmmm… Berries and mushrooms are commonly found in the woods. If I go hiking in the Northwest woods in the spring, summer or fall, I can pretty much guarantee I will come across some berries or mushrooms. Not to mention that bears eat a lot of berries – ever consider that maybe these people got dragged away by a bear; who caches food by burying it for later eating?

Children who got away in the blink of an eye – He primarily describes young children this way. He is shocked that a child could get away from the yard, or out of a house, in the span of a few minutes. Really? I don’t have kids, but I have several nieces and nephews and friends with kids – they are amazing escape artists and really can get away in a second. Not to mention – any parent who just lost their kid is going to say, “I just looked away for a second.” They aren’t going to admit that they left the kid outside alone for 45 minutes while they made dinner, went to the bathroom, finished off that bottle of tequila (insert activity here.)

Children who don’t respond to calls from searchers – Ummm… yeah. Ever heard of stranger danger? We go to great lengths to teach children not to talk to strangers and then he wonders why they hide from strangers?

Children who walk long distances – He constantly quotes a search and rescue manual that gives approximate distances that most children will travel when lost. 95%, supposedly, will stay within the guidelines. We already determined that Paulides selects cases that fit his profile, and he tends to pick the cases where the children walked further. Being in the outer 5% doesn’t make it impossible.

Disappearances near water – There is a lot of water in this world. Paulides considers it to be “near water”, if there is a body of water of some sort within a couple of miles of the disappearance. Considering communities tend to be situated near water, this doesn’t seem like a stretch. I have a 20 month old nephew who will run at full tilt to get to water, and then launch himself face first into it with no regard for his safety. Little kids gravitate to water like moths to a flame – there is a reason why your insurance is higher when you have a pool, also known as an “attractive nuisance.” Adults will try to find water when they are lost – both to drink it and to follow it back to civilization; and then Paulides wonders why when they died of exposure they died near water.

Victims are found with no clothes or partially clothed – People with hypothermia take their clothes off; this is well documented. Paulides often states that the weather was not cold enough for someone to suffer from exposure, but you can get hypothermia in 80 degree water or in 60-70 degree temps. Depending on how long someone is out, what they are wearing and whether it is raining, it is not unreasonable for someone to have hypothermia even if it hasn’t been that cold.

Victims are found face down – As a former police officer, Paulides ought to know that drowning victims typically float face down; it is a gas buildup/decomposition thing, not a baffling mystery.

The lost person is found in a place that was already searched – People don’t always stay in one place; especially kids. It isn’t like once an area is searched it gets a big wall with a padlock on it. Admittedly, finding a body in a location that was already searched is a bit odd, but how do we know that the searchers did as good a job as they said or thought they did? In forests and mountains, it is not as simple as linking arms and walking across a field. There are places that are difficult to get to.

Disappearances in clusters – I think Paulides takes liberties here and takes advantage of the fact that most readers don’t know the location he is writing about. He has one case that takes place in Issaquah, WA. He attributes this case to his “Lake Wenatchee cluster.” He states Issaquah is 50 miles from Lake Wenatchee. However, Google Maps will tell you that the shortest driving route is 113 miles. Not really that close, if you ask me.

Disappearances in National Parks – Yes, it is true, there are people who go missing in National Parks. But considering millions of people go to National Parks each year – over 3.5 million people go to Yosemite each year (where Paulides says there is a cluster). I also go to National Parks, and see people do very stupid things there. They hike without adequate food or water, they stand too close to cliffs and waterfalls, they walk right up to wild animals. The fact that a few might hike off and die, or fall of a cliff, or get attacked by a bear and never be found doesn’t seem that far-fetched.

Once you are outside the main areas of a park, you might not see anybody – Jon and I experience this frequently. If you are alone, in bad weather, and get lost away from the trail – let’s just say it seems like a miracle that any of these people are found. Searchers are human, terrain is rough, lost people move, and there are holes and caves and cliffs in some of these areas that would hide a body forever. Just think of some of the planes that have gone down in the woods or on mountains and are never found…

The National Missing and Unidentified Persons System (NAMUS) states there were 661,000 missing people in the U.S. in 2012. Not all cases get reported to that agency; other estimates are closer to 1 million people each year. There are an estimated 40,000 sets of unidentified remains in various morgues and coroner’s offices around the country.

This book documents about 174 disappearances, from 1856 to present – over 150 years (although one case is from the 1700s). Paulides admits that at most, there are typically 5 cases in a year that fit his “profile”. So conservatively (using the 661,000 number), that is 0.0008% of the total missing persons in a year, a mere fraction of a percent. He picks the most unusual cases, twists the facts to suit his purposes, and then expresses shock that those are sometimes the people who are never seen again.

I think I have established that I don’t believe that there is any sort of conspiracy here. But that said, I did enjoy the book. It is a decent compilation of strange disappearances. Frankly, some of the cases are weird, but Paulides leaves many details out that would make the disappearance much more logical. However, I do wish that Paulides would hire himself a decent editor – there are numerous typos, punctuation errors, grammar errors and factual errors (typically where he lists two different dates for the case) in the book, and I had to re-read many paragraphs trying to figure out the correct info.

So read it with a curiosity for missing persons cases, but I don’t think that it shores up the argument for any sort of government conspiracy or cover up, much less Bigfoot, alien abduction, evil little people or fairies. Get the book from the library so you aren’t paying a dime. And whatever you do – don’t hike alone! That’s just common sense.