And just like that, another year has flown by and it is time for another annual recap.  The top 10 for another (mostly) great year in chronological order, rather than order of importance, are:

1. Jon and I took our first trip to Walla Walla wine country, after Jon ran his 3rd half marathon in Richland, WA.  He placed 3rd in his age division and 11th overall!  We had some great food, great wine, and visited the Whitman Mission National Historic Site.

2.  My dear sweet bitchy kitty Martini went home to the angels after losing her battle with lymphoma on March 1.  I’ll never know how old she was, but I will always remember the nine years I got to spend with her.  And unless you are Oliver, to know her was to love her…

3.  Jon and I took a fantastic road trip to California, down the coast through the Redwoods, the Anderson Valley wine country, San Francisco, Monterey and finally Sacramento.  We saw huge trees, big elk, lighthouses, one of the world’s most awesome paintings, and we ate great food, tasted great wine, and saw great views.  And I puked.  Several times.  Ten days and almost 2,500 miles later, we came home exhausted and thoroughly spent, but happy and with memories to last a lifetime.

4.  On April 20, this sucker for a cute baby brought home sweet Coraline, a six month old kitten who was brought to my vet’s office after being dumped on a farm.  She doesn’t have a mean bone in her body, but she does love her kibble.

5.  I got to indulge my inner nerd in June with a trip to Antiques Roadshow in Boise!  We didn’t make it on the show, but if you are interested in watching other people from the Northwest, the 3 hours are airing on January 6, January 13, and January 20 (who knows, maybe the back of my head will be on!).  Although we can’t fund our retirement by selling our treasures, we had a blast, and had a great time seeing the Old Idaho Penitentiary and the World Center for Birds of Prey.

6.  I completed my fourth (on September 1 in wine country!) and fifth (on October 5 at home for a great cause!) half marathons.  Next year, I will have several friends testing their resolve with me!

7.  Jon and I enjoyed a weekend trip to Olympic National Park, where we hiked in the Hoh Rain Forest and listened to the crashing waves of Rialto Beach.  Although Hurricane Ridge gave us the finger with a huge downpour, we’ll be back to see those views.

8.  I had a scare with my horse Biz, who had a scary bout with colic after his most recent dental x-rays.  At 26 years old, I am aware that my remaining time with him… well… you know…

9.  Jon and I welcomed our newest nephew on November 13 (that makes two nieces and two nephews now!).  He is sweet and perfect and cuddly.  His parents love him dearly (at least until he starts talking back).

10.  Jon finished his first full marathon on December 8, in Sacramento, California.  I got a trip to California out of the deal (no more trips to California Jon!), where I got to visit the Sacramento National Wildlife Refuge, the Governor’s Mansion, and the John Muir National Historic Site.  Posts on the trip coming soon, I swear!

This annual recap reminds me of how truly blessed we are to live the life we do.  We are surrounded by awesome friends and family, loving animals, and we are lucky to have the freedom to enjoy our travels to wonderful places.  Although there are always the highs and lows, I am thankful that there are many more highs…  I hope you have all been blessed by 2013, and that all your dreams come true in 2014.  So bye, bye 2013 – you have been good to me!

This is the post I never wanted to write…  Well, I might have been ok writing it in another 15 or 20 years… Maybe (yes, I realize that’s not realistic, but a girl’s gotta dream)…

Martini went to be with the angels yesterday afternoon.  After her bout with pancreatitis landed her at the vet for an overnight stay for IV fluids, I went to visit her yesterday hoping that she would be feeling perky and mad about being stuck in a cage and ready to go home.  Sadly, she wasn’t improving, and she hadn’t eaten at all.  She purred and purred when she saw me, and Jon and I spent awhile petting her and scratching her chin.  But it was clear that there was no longer a hope for a good quality of life.  I’m just comforted by the fact that she was purring at the end.

But instead of thinking about how heartbroken I am, I want to think about how my joy she brought to my life and how she is now in a better place.  So, I thought I would share a little about the life she lived.

Martini came to me on February 5, 2004, from the Alternative Humane Society.  She had gotten a death row reprieve from them, because she had been at the regular Humane Society and was slated for euthanasia.  She got been there for about 4 months, and had gotten kennel stress and started biting people who came to see her.  They told me she was between three and four years old, but she could have been several years older than that.  The Alternative Humane Society was so excited that someone wanted her (I saw her pic on the website and called about her), that they had her spayed and delivered her still groggy to my house!  Where she hid in my closet for the next three days.

On the third night, she came out of the closet and climbed up on my bed.  Where she slept every night for the rest of her life, except for three nights she spent in the vet’s office.  They had said she was picked up as a stray, but once she settled in, it was clear that she had a family at one point.  She just loved being around people too much.  She loved sitting on my lap, and hated when I gave any attention to my other cats. 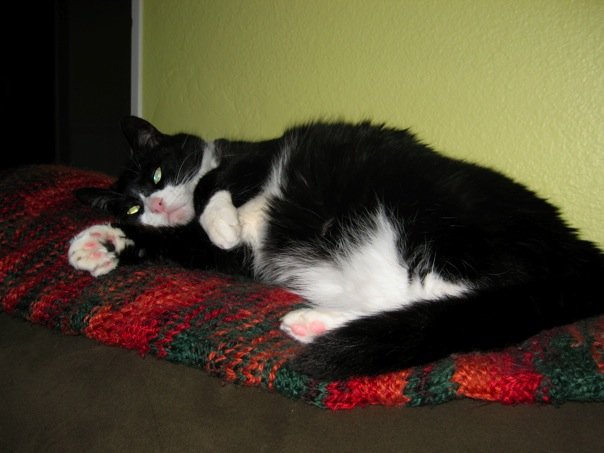 Martini Before Her Protein Allergy

Although she was a lover, she had a very strong personality.  She made it known when she wasn’t pleased about something; she had a long list of things that made her mad…  Rubbing her belly for too long, touching her paws, brushing her and pulling on her hair to get the mats out, repositioning her if she was sitting on your lap and you wanted to reach for something, trimming her claws, giving her pills, letting the other cats sit next to you…  Like I said, it was a long list. 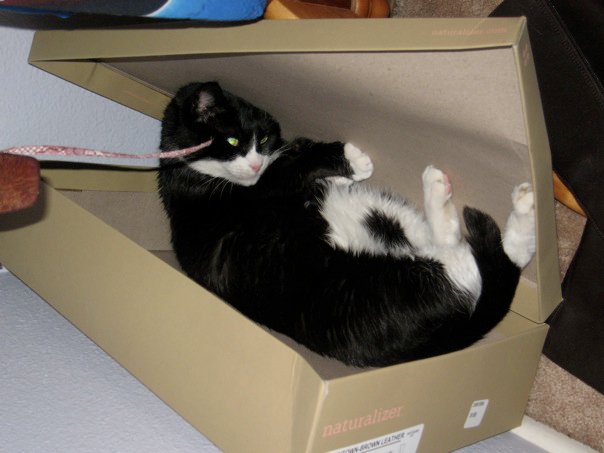 Martini Playing in a Shoebox

We had a bad scare in 2009 when she became violently ill with uncontrollable vomiting.  A night at the emergency vet for IV fluids perked her up, but three weeks later she was severely ill again.  A referral to the ultrasound specialist saved her life, revealing that she had a protein allergy.  Once we knew that’s what it was, changing her food put her on the path to recovery.  But she wanted everything that was bad for her.  She trolled around the kitchen, looking to cash in on our rookie mistakes.  Once, she grabbed a giant steak that was marinating on the counter and managed to get it under the bed, where she was gnawing on it when Jon found her.  Over the years, she absconded with strips of prosciutto, slices of pizza and chunks of chicken.  She grabbed chunks of canned tuna from the sink, and once, when feeling particularly desperate (she was fasting for a blood test), got into the garbage and made a sad meal out of a tomato. 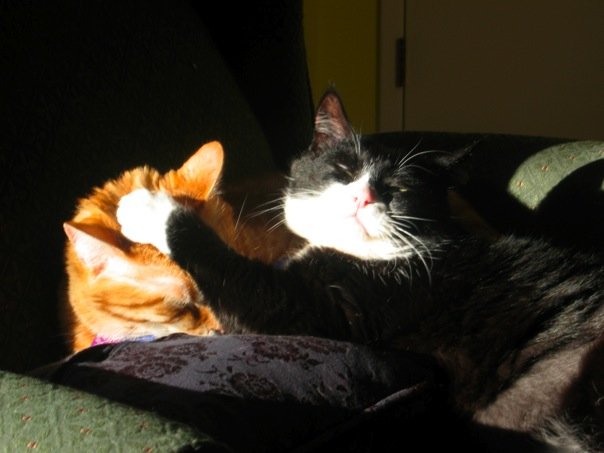 But it wasn’t all hijinks and grumpiness.  Martini loved to snuggle.  She slept with me every night, in her later years preferring a spot under the covers to keep warm.  She snuggled in by my chest, and when I rolled over, she would tiptoe up over my head and take her position back up on the other side.  She loved to scare Jon by being next to him staring at him when he woke up with a cat in his face!  She never tired of nap-time and loved those lazy weekend days when I would take a nap in the afternoon.  She loved to sit with me for TV watching, movies or just visiting with friends.  She was content just being with me.

I will miss my sweet kitty.  I already do.  I will treasure the nine years I got to spend with her.

Stopped by the Yaquina Bay lighthouse. Built in 1871, it sits 161 feet above sea level, and was decommissioned in 1874. It was relit as a private navigation aid in 1996. #historiclighthouse #Lighthouse #Oregoncoast #vacationmode #tourist #exploring
Day 1 and day 2 agates! And some fossils thrown in for good measure! #rockhound #agates #vacation #MondayMood #vacationvibes #Oregoncoast
Practicing with the photo ball this morning. I'm liking the artistry... #landscapephotography #photography #oregoncoast #beaches
A little bit of work for an awesome reward! #Oregoncoast #sundayfunday #girlstrip #weekendvibes #vacation #girlswhohike
A morning spent wandering the beach and looking for agates and seashells. Found some good ones of both, and teeny tiny sanddollars! #vacation #beachcombing #sundayfunday #weekendvibes #rockhound
Played around a bit with my photoball this morning at the Peter Iredale shipwreck. A wonderful subject! #photoball #photography #vacation #weekendvibes #crystal
Yesterday was my first day of my vacation. We literally had to run to catch the sunset but it was beautiful! #beach #sunset #relaxing. #vacation
Obligatory tank walk #selfie from earlier this week. #Lunchtime #walking
It was a beautiful morning for a hike at the Stimpson Nature Preserve. The woods do my soul a world of good... #hiking #girlswhohike #nature #OptOutside #PNW #summer
Waiting for the vet to open to drop the cat. Don't worry he's ok; just getting some stitches to close up a stubborn wound that won't heal. #selfie #FridayFeeling #almosttheweekend