This was an unusual choice of audio books among my Dad’s collection, in that it was not a thriller.  Perhaps my mom chose it. I read James Frey’s A Million Little Pieces years ago before the controversy about him making up the story and then selling it as a memoir.  That hubbub seems to have died down. 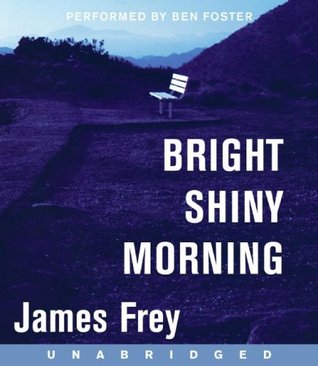 This novel, if you can call it that, details a series of stories about people in Los Angeles.  The down and out, the rich and famous, the ones who are trying to escape their pasts and build a new life.  The downtrodden and abused, the up and coming, the ones who have nothing but hope in LA.

In between the characters’ stories, Frey details the history of Los Angeles, its fun facts, its troublesome violence, its natural disasters.  Honestly, no book has ever made me want to visit a place less than this book.  I’ve been to LA, and don’t really see the appeal, but this really solidified that I cannot understand why anyone would want to live there.  The only thing it has going for it is sun.

Still I found myself interested in the stories, and intrigued by Frey’s unusual writing style, which frequently annoys readers based on his reviews.  The narrator, Ben Foster, is excellent.  He narrates with different accents, and changes his pitch, tone, speed and volume to vividly portray the stories in the book.  However, if you are looking for a happy ending, there doesn’t seem to be one in Los Angeles.  Don’t say I didn’t warn you…

In my last post, I described our drive back to California from Williams, AZ.  Once we arrived, the focus shifted from Jon and I being alone in the National Parks with seas of strangers, to being surrounded by loved ones.  The masses were converging on the Marriott Marina del Rey to celebrate Jon’s cousin’s wedding.  Other than the rehearsal dinner and the wedding, the last two days of our trip were unscheduled.  We had some time to relax, and enjoy the company of family.  And relax we did.

Our hotel was located within walking distance (about a mile) from the famed Venice Beach, so we walked down to check it out.  Over the two days we were there, we walked to the beach three times.  The pier seemed bland, a hulking concrete structure that seemed to have no purpose.  The beach was beautiful, with lovely sand and gently lapping waves.  California really does have amazing beaches.  I collected some tiny seashells, and we walked along talking and soaking up the sunshine.

Jon and Me at Venice Beach

We also were treated to a Brown Pelican visiting.  He was just hanging out on the beach, unfazed by the crowds.  I was able to get some nice pictures of him, and when I zoomed in, I could get just him without all the people who were nearby.

A Brown Pelican on the Beach

We also checked out the famed Venice Beach Boardwalk; I was completely and totally unimpressed.  In fact, I was more than unimpressed – I was really put off by it.  It was just shop after shop of souvenirs, and block after block of young men hawking black market CDs.  Yuck!

The wedding was great – the reception was a blast!  It was fabulous to be a part of Jon’s cousin’s new start in life; his bride is wonderful.  I’m sure they will have many happy years together.  I got to do a little swing dancing to Brown Eyed Girl (one of my absolute favorite songs) with Jon’s uncle, who is a really good dancer.  I just hope the video never makes it to YouTube!  Because while he is a fabulous dancer, I’m sure my dancing is cause for much laughter among the audience!

On Sunday afternoon, before heading to the airport, Jon and I made a visit to my uncle who lived in Los Angeles.  He was battling colon cancer, and the diagnosis was terminal.  It was a wonderful opportunity to spend a few quiet hours talking.  We talked about travel, family, love and loss, and he told me stories about growing up with my grandparents, father, uncle and aunts.  My uncle passed away in August, and although I did get to see him again only a few weeks before he left us, this visit is the one I treasure.

After our visit, Jon drove us back to the Long Beach Airport, to drop off the car and take our flight home.  We were more than relieved to hear the rental agent say “no damage” after the dirt road beating we had inflicted on that poor little car.  And I wouldn’t be surprised to hear that they had to realign it after our trip.

The flight home was uneventful, and a great end to a trip that made memories to last a lifetime.

Our last day in California was reserved for a trip to the Getty Museum in Los Angeles.  I first heard about the Getty several years ago, when they were sued by Italy for knowingly acquiring marble statues and other Italian antiquities that had been looted from archeological sites.  Their former curator stood trial on charges in Italy.  The Getty has returned some of the items after it was determined they were stolen, but they still have other pieces that have suspicious origins.  It will be interesting to see how that all plays out.  Most of these items are housed at the Getty Villa, which is a sculpture museum on a different site than we visited.

We got to the Getty about 10:30 and parked in their massive bomb-shelter – I mean garage – and then came back up to ground level.  From there, you take a tram up the hill to the museum itself.  The views of LA are amazing, and when you see the museum, it is even more impressive.  The courtyards and buildings are made from marble and concrete, and are massive.  There are fountains and gardens with a manicured maze too.  And beyond paying $15 per car for parking, admission is free.  They offer little maps of the exhibits and the grounds, but I have to say, their map kind-of sucked.  Several times we wandered over to a building because I was sure that it was the one the map was pointing us to, only to find out that oops, that’s not it!

The Courtyard at the Getty Museum

Once we figured out our bearings, we started touring.  We started out in their Europeon wing, where they had art and objects from 14th, 15th and 16th century Europe.  Of course art at that point was mostly religious art, so we toured lots of Virgin Marys, Jesuses, and some John the Baptists.  There were some mythical depictions too, to spice things up a bit.  I liked their collection of drug jars.  Apparently the pharmacy jars of the time period survived in better shape than household goods, and many of them were quite ornate!  But, after awhile, you see one Virgin Mary, you’ve seen ’em all, so we headed to another section.

Exhibit two was documentary photography from the 1960s to present.  They had some very interesting exhibits, including a group of photos of Seattle street kids in the 1980s, and one titled “Kids with Money.”  Southern California kids with more money than they knew what to do with shopping, putting on makeup, and getting all dolled up for their 7th grade parties.  It was eye opening.

But the most powerful exhibit was a huge montage of photos from the Iraq war.  Instead of focusing on battle views, the photographer chose to photograph in operating rooms.  These photos of soldiers bloodied and torn apart brought tears to my eyes.  It doesn’t matter what your political affiliation is, to look at these photos is to understand that something has gone wrong in the world.  I left that exhibit feeling very saddened for those men and women and their families.

The last exhibit we had time for was their special exhibit on Gerome, who was a French artist in the mid-to-late 19th century.  I had not heard of him before, but I will certainly look up more about his work.  These works were also on loan from the Musee d’Orsay in France, which is currently undergoing renovations and has loaned many of their exhibits to museums around the world.  But back to Gerome – he paints with a very realistic style, which gives his works a near photographic quality.  He has the talent to pain humans and animals and objects flawlessly and his paintings sometimes have entire landscapes occurring beyond what is going on in the foreground.  His use of color is magnificent.  Jon and I were both very impressed.  Apparently, directors in the early 20th century often used his paintings as their inspiration for scenes in movies – they showed several still photos from early Hollywood movies next to one of Geromes works and you could clearly see that they copied directly from his painting.  If you have the opportunity to see this exhibit, you should.

The Horse Trader, one of my favorites

After we were done there, it was time to head back to the airport.  Of course, it is LA, so there was a traffic jam.  We moved very slowly back to the airport, worried about the time, only to find out that our plane was delayed anyway.  Our friends were on the same flight home though, so we ended up chatting with them before getting on our plane an hour late.  A pleasant flight home and a very late bedtime concluded our Southern California vacation.  Can’t wait to go back and explore some more!