The Testaments, by Margaret Atwood

I read The Handmaid’s Tale, by Margaret Atwood, in college in 1995; it was assigned reading in an American literature class (we will set aside the fact that Atwood is Canadian).  It was so interesting.

The book follows the idea of a United States (now called Gilead) that experiences a takeover by a totalitarian, Puritanical regime, and people are segregated into roles.  Commanders (those running the country), Wives, Marthas (servants), The Eyes (the security force).  The book focuses on the role of the Handmaid, the women who are selected to be breeders for the Commanders; a necessity because some unspecified ecological disaster has caused infertility in most people.

The Handmaid’s Tale was published in 1985, and in recent years has become wildly popular, with modern-day readers drawing parallels (whether real or imagined) with the current political climate. Hulu picked up the rights and created a television series, which is very well done.

Atwood wrote a sequel to The Handmaid’s Tale, called The Testaments; it was published in 2019, almost 35 years after the original novel.  It picks up with the stories of Gilead, 15 years later.  An active underground continues to try to destabilize and overthrow the government of Gilead and restore the United States.  Gilead is showing cracks in the system.  It follows the stories of three individual women whose lives are woven together.  All strong women; Atwood doles out their secrets over time and reveals a backstory that the reader might not have guessed.

Again, Atwood writes a novel that draws the reader in and holds your interest, but unfortunately I didn’t find it quite as compelling as the original novel.  Although I’m sure that people will be talking about both for years to come.

I have a feeling you either love Neil Gaiman’s writing or hate it, and that I’m kind of an outlier in that I just kind of go “meh”. 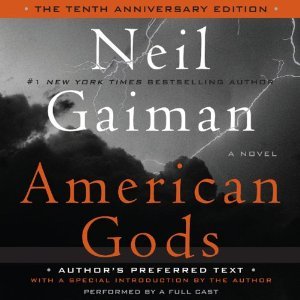 I love the movie Coraline, but have to admit that I never read the book. And that, was basically all I knew about Gaiman when I picked up this book.

It centers around the story of the clash between the Old Gods (the ones that we used to worship from the different mythologies and religions throughout history), and the new gods that Americans worship now. Media, technology, consumerism, etc.; those are the new gods.

Shadow, a convict who is released from prison three days early due to the untimely death of his wife, meets up with Mr. Wednesday, a mysterious, seemingly omniscient man who hires him to be his bodyguard. They travel around the United States trying to gain support for their god war; in the meantime giving Shadow insight into the things that matter, the things that don’t and the fact that people these days largely don’t have their priorities straight.

I was put off by the violence. I found it unnecessary, and I thought it detracted from the overall message of learning what matters in life. I also found that the plot moved forward at the pace of molasses, which seemed odd to me given the violence. However, some of the symbolism did resonate with me, and it did for the most part hold my interest the whole way through.

Just a note: the audio-book version was performed with a full cast, and they did a great job.

If you like strange and eclectic books and movies, like Tom Robbins, Anthony Burgess’ A Clockwork Orange or Wes Anderson, you will probably love this.

I never read this book when I was younger.  I didn’t even know it was written by Nathaniel Hawthorne, probably due to some mental mix-up with the Anne of Green Gables book, which seems so much more cheerful than anything Hawthorne would write.  I mean he did write The Scarlet Letter, with all those uptight Puritans.

But then I went to visit the House of the Seven Gables, in Salem, Massachusetts, where Hawthorne lived for a period of time with his relatives.  It was built in the 1600s and was the inspiration for the home in his book.  The gift shop was selling copies of the book, with a little stamp that indicated you bought it at the actual House of the Seven Gables.  And it was only $11, so I bought myself a copy.  Now I wish I would have read the book before visiting the house, but there’s nothing I can do about that.

First things first.  19th century literature is a challenging read.  Oh boy…  We think we are so smart these days with our constant connectness, but writers back then really poured in all the vocabulary words they had ever learned.  And the descriptions!  So much of the book is based on description, rather than action.

The novel centers around a cast of characters from the Pyncheon family, of whom three, an elderly sister and brother, and their barely adult niece, live in a 200-year-old home.  It was built by an ancestor of theirs and is rumored to be cursed.  The book alludes to, but never states outright, that the ancestor accused the original owner of the land of witchcraft in order to buy his property on the cheap after he was executed.  So that man did what any good witch would do and issued a gallows curse on his accuser.  I mean, even if you weren’t a witch, you are about to be executed, wouldn’t you be tempted to pop off and see if karma might have your back?

Fast forward to the mid-1800s, and the elderly residents of the home are poor and anti-social, hiding out like hermits until their young, fresh niece comes along to breathe some life into the place.  As the plot goes on, there is the constant theme of where is the money hidden, in the form of 200-year-old property deeds on long-contested land that would make the rich relatives richer and the poor ones, well, they probably wouldn’t see a dime.

So there you go.  Murder, mayhem, Puritans, witchcraft and a pretty, young maiden to save the day.  There’s a love story in there too of course, and a few twists to keep you guessing.  A good story if you can keep your eyes focused through all that prose.

Note: The photo above is not the edition I read, but this book has approximately hundreds of editions and versions and I’m lazy and just picked one of the photos instead of trying to find the version I read.  So there.