What kind of houses does Michigan have more of than any other state?  Lighthouses!  Michigan has more than 150 past and present lighthouses, and we were on our way to see one!

The Ludington North Breakwater Light is maintained by the Sable Point Lighthouse Keeper’s Association (I’m not sure if they require you to be a lighthouse keeper to join, but I hope not, because that might be a pretty small group…). It is open for tours between late May and Labor Day, but once again, we were shut down by the fact that it was the off season.

The first light was constructed in 1871 with federal funds, but getting the funding for a light keeper’s house proved more difficult. Granted, one can just walk out the pier from the town of Ludington to the light, so that probably had something to do with it, but in bad weather the walk along the pier was very precarious.

Even on a sunny day in October, the winds were high enough that we didn’t want to brave the walk along the pier, because waves were crashing over the concrete pier. Imagine trying to make the walk in the dead of winter, during a storm, with a wooden pier! It wasn’t until 1900 that a light keeper’s house was built.

Eventually the wooden pier and the breakwater began to break down and a decision was made to construct the current concrete pier and a new light. The current pyramidal shaped light was constructed in 1924; the unique shape is to deflect the high winds and waves from the lake. It is made with steel plates, and is 57 feet tall.

It was originally lit with a Fourth Order Fresnel lens (for more info on Fresnel lenses see this post), constructed in the United States rather than France, but the lens was removed several years after the light was automated in 1972.  It is currently on display at the Historic White Pine Village, a tourist village that sounded interesting, but with the timing of our trip and other things we wanted to do, it just wasn’t in the cards for us.

And just so you know, that tilt on the lighthouse isn’t my terrible camera angle.  The lighthouse actually is tilted!  In 1994, the crib that the light sits on settled and it tilted 4 degrees to the northeast.  Repairs were considered, but abandoned due to the cost after it was determined that the lighthouse was still safe (don’t worry, I know you are going to scroll back up and look at the photo again – that’s perfectly fine).

Next we drove down the road that runs near the water towards Silver Lake State Park. Before going into the park, we parked and were able to check out the lake and the sand dunes; Jon got his first look at Michigan sand dunes and loved them! But the weather that day was too cold and windy to enjoy the beach for long.  Silver Lake State Park actually has a lighthouse too, but vacations are all about choices, and we decided not to visit this one – but I do wish we had the time for everything.

An interestingly positioned chunk of driftwood on Lake Michigan

We made our way to our last stop in Ludington; dinner at the Jamesport Brewing Co. I ordered the beer sampler, with the following beers:

I ordered the Lake Perch, a specialty for this restaurant, and I don’t think I have ever had perch, so I wanted to try something new! It was lightly breaded and fried with homemade seasoned French fries. The side salad was delicious too.  Jon had the IPA (he’s getting very predictable) with the Citrus Salmon; it was served on a bed of rice. He had a side salad too. We were both very happy with our choices.

The downtown area of Ludington was quite cute, with several neat shops that I would have loved to poke around in. But they were closed when we finished with dinner (most were closed before we even started dinner). As it were, we continued on to our home for the night in Manistee.

On a country road as the light was fading, we saw a flock of turkeys crossing the road. Turkeys! I had never seen wild turkeys before, so that was pretty neat, but the fading light (and the fact that Jon wouldn’t stop the car) meant that my pictures of them were blurry. As we were getting into Manistee, we were just seeing the last light of the day and enjoyed a lovely view of the lake.

Pre-day – The Drive to Eugene, Oregon

The first night of our trip, we left after work for the long drive to California.  We had decided to split up the drive – drive to Eugene the first night and then on to California the next day.  We stopped at the Starbucks drive through on the way out of town for a snack and a pick me up – the rain was just starting as we headed out.  But the rain kept getting worse.  Unacceptable.  And there was a lot of wind.  At points, you couldn’t drive the speed limit!  UGH!  The late start and the slow-downs from the torrential downpour meant that we didn’t get to Eugene until midnight.  We were still so on edge from the rain and wind that we needed a glass of wine to settle down before bed.  Covey Run Syrah.  Inexpensive, nothing special, but it did the trick.  As a matter of fact the wine kind of fit right in with our lodging for the night.  Inexpensive, nothing special, but it did the trick.

We woke up early (especially considering we were up until 1 am!) and were on the road at 8 after having the hotel’s continental breakfast.  The rain continued.  During the first part of our drive, we passed a lot of farms with lots of sheep and baby lambs.  I have never been on that stretch of I-5 in the daylight (as an adult), so that was kind of interesting.  We also saw a lot of moss hanging from bare trees.  And strangely, they were doing logging right off the side of the freeway!  The torrential downpour let up north of Myrtle Creek, Oregon, but not for long.

This Part of the Drive in Oregon Was NOT Pleasant

We stopped in Grant’s Pass to get gas and then headed over to the Northern California Coast on Highway 199.  Highway 199 is a narrow twisting road in places, but it is not scary like the Bear Camp Road we took to Gold Beach, Oregon in 2011 (never again!  You can read about it here).  It would be nice if Highway 199 had more scenic pullouts though, as you are traveling along the river for a good portion of it.  Towards the end of 199 we drove through stands of Redwood trees.  They were enormous!  We learned later that those aren’t even the big ones.  We got to Crescent City and had lunch at the Good Harvest Cafe.  Jon had the seafood salad with shrimp and grilled fish.  I had the crab quesadilla.  Both were delicious and very filling.

Welcome to California! It Was Still Raining Though

After lunch, we went to the Redwood National Park Visitor’s Center – where I got a stamp for my National Parks Passport!  The ranger gave us some great information on the best scenic drives, the best hikes, and the best place to see Sea Lions nearby.  He was very helpful.  After leaving the Visitor’s Center we headed out to go find the Battery Point Lighthouse.

The Battery Point Lighthouse is one of the earliest lighthouses on the California coast – actually the 10th one finished.  It is built in the Cape Cod style of architecture.  It was first lit in 1856, with a fourth-order Fresnel lens.  The light was automated in 1953.  The light was decommissioned in 1965, but it was lit again in 1982 when it became a privately owned lighthouse.  Fresnel lenses are smaller, compact lenses with many sections of prisms that reflect light extremely efficiently.  The “order” of the lens indicates its size – Fresnel produced six sizes of Fresnel lens, with first-order being the largest.

Battery Point Lighthouse is only accessible during low tide, but when the tide is low you can walk right out to it; it is open for tours on weekends from 10 am to 4 pm during the winter months.  I wasn’t expecting it to be low tide, but it was!  So we were able to walk across the spit and walk right up to the lighthouse.  It was closed because it was a weekday, but we were still able to get some great shots of the lighthouse. 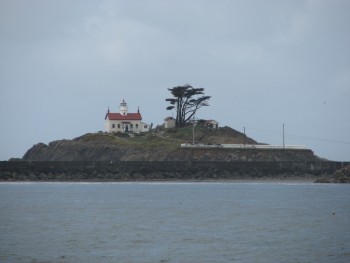 The Battery Point Lighthouse from Across the Bay