We didn’t want the same thing out of life.  I was the shy introvert who always felt awkward around your friends. You were the larger than life extrovert. I wanted the quiet career and the white picket fence (I still don’t have that fence by the way).  But for that four years starting with the Halloween after I turned 18, you were my people. My first roommate. My first adult relationship. The one who taught me about love.

You wanted to be in a metal band. To make it big. I hated metal and wanted to be in bed by 9:30 – well maybe midnight back then… You stayed out all night going to band practice and playing Dungeons and Dragons, while I studied and watched M*A*S*H before bed. I never worried about what you were up to because band practice and Dungeons and Dragons was your obsession. I knew where you had been because the smell of that damned pizza on your sweat when you crawled into bed.

You were a genius. One of the smartest people I ever knew. You knew so much about history. We used to talk about it when I was learning things in school. I always wondered why you didn’t want to go back and get a degree.

We shared my car until you got your own.  You borrowed the money from my parents.  Do you remember how you would get off work late on the day the payment was due, and even though I would try to convince you to do it tomorrow, you insisted on driving over to my parents house that night so you could make the payment on time.  My dad always respected that about you.  I wonder if you have seen dad up there in Heaven and have had the chance to catch up.

You bought me my first legal drink at 21.  You nursed my hangover when that night ended up like most 21 year old birthdays do.  You made sure I didn’t feel so adrift at parties.  You were always a better cook than me. And your bathroom habits set the standard to which I compare every man since you. Every parent should teach their sons so well how to keep a bathroom clean.

We had lots of good days together, as broke kids just starting out, even though we were destined to go our separate ways. I loved you. You were kind. You treated me well. Those who came after you could have learned a thing or many from you.

We stayed friends after we broke up, after we got through that awkward phase.  I hope we both recognized we were good people who just wanted something different from life. I know I always thought you were a good man.

I see all your friends’ tributes to you on Facebook, and I feel removed from them. Most of them don’t know me. I came from a time before. My pictures are from a time when we almost children.  Now your oldest daughter is older than we were then.  My pictures have fresh young faces unmarked by time, and the weight of life. But I see the grief in your friends’ words, and I feel that too. I feel their pain. I feel what they feel so profoundly that it makes my heart ache and the tears fall in torrents.

I could never get behind all those cheesy sayings you did later on.  It’s the introvert in me. It’s the Virgo in me too.  I never wanted to be on stage, to be the center of attention the way you did. But you connected people with those cheesy sayings and made people feel valued and seen. That was your gift. I wish more people had that gift and used it. I wish some of the men that came since you had that gift and used it.

God speed Jeff. I know your soul is free and you will shine down on me and everybody else who is hurting with your loss. Vaya con Dios. 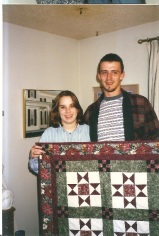 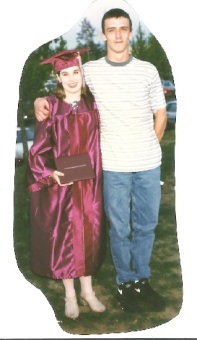 I am in Indiana – I arrived Monday evening after spending the day seeing the Lincoln Museum in Springfield, Illinois.  I headed over the Indiana line to spend some time with a relative.

My relative and I planned to spend the day touring some of the rural Indiana sites, including some of the picturesque covered bridges.  We went to a small community park that has a bridge that has been moved there.  Our first bridge of the day.

The morning was still young, and there had been a big thunder and lightning storm the night before; it was still fairly dark at 9 am.  We took a photo of the outside of the bridge and then walked inside to check it out. 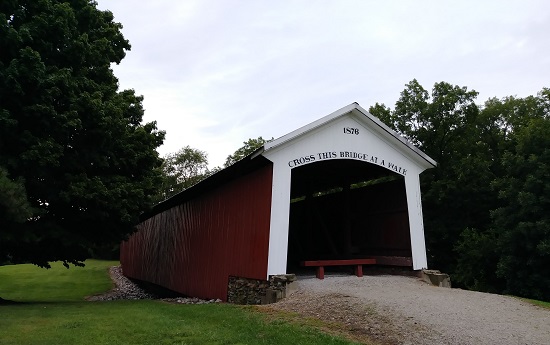 I just want to say I am surprised that I remember the thoughts that came into my head next with such vivid detail.

After a moment checking out the near end of the bridge, I turned to look down the length of the bridge and saw a man standing there in the dark. I knew immediately that something was very wrong, but my brain couldn’t process what it was. My next thoughts…

“Holy shit, he was so quiet and still.”

(seeing that there was something spread out at his feet) “Oh, he must be an artist and is painting the bridge.”

“That is absurd.  No one would paint the dark inside of a covered bridge.”

“He is standing at a really funny angle.  You can’t stand still like that.”

All these thoughts went through my head in probably less than 15 seconds.  My relative and I quickly went back outside and called 911.  Fortunately the Sheriff was close by and arrived quickly; he confirmed that there was nothing that we could have done for this poor man, had we gotten closer.

We were able to salvage the day with tourist activities, but this man and his family have been on my mind for the last few days. I see it in my mind when I turn out the light out at night.  It was deeply traumatic for me; I imagine I will see that image in my mind for the rest of my life.  I also know that is nothing compared to his pain and the pain his family is now in. I will probably never even know his name, but I hope that his family finds peace.

Update: Vermillion County, Indiana is a small place, and Marilyn sent me the young man’s obituary a few days later.  I realized then how clearly I had seen his face, in those brief seconds in the dark.  I pray for peace for him and his family, as I am sure they are still struggling with this a year later.