After I finished shopping at Hastings, it was time for some touristing.  The first place on my must-see agenda was the Old Idaho Penitentiary.  I’m not sure why I have a fascination with old prisons – perhaps it is because I likely will never see the inside of a new one (knock on wood) because I lead a pretty boring, plain-vanilla life (which I’m totally fine with by the way).  And my family doesn’t really have any run-ins with the law either, so I’ve never had occasion to visit anyone in prison either (again, I am not expressing any kind of regret for not having had this experience).

But the reviews describe Old Idaho Penitentiary as better than Alcatraz, so I had to find out.  The Old Idaho Penitentiary was built in 1870 and housed prisoners for an astounding 101 years – from 1872 to 1973.  The site was chosen because of its proximity to the growing Boise area, and the cheap building material – sandstone.  The prison began with a single cell block, and most of the buildings were built by inmate labor.  It eventually grew to an entire compound with over a dozen buildings.

From the beginning until Idaho became a state, the prison was operated by the Federal Government.  This was the rough and tumble West, so many of the prisoners were hardened criminals, there for murder, assault, horse thieving, and a host of other crimes.  In its history, the “Old Pen”, as it was affectionately known by the locals held over 13,000 prisoners, with a maximum occupancy of 600 at one time.  The prison was known for being a pretty harsh environment; if you have ever been to Boise you know that the summers are hot and the winters are very cold.  The sandstone provided shelter, but didn’t keep you warm…

In the early years, women were housed with men, but after one female inmate told the Warden she was pregnant (I’m sure she was just trying to stay warm in the winter), they figured they had better get cracking on a separate cell block for women.  Women were separated from the men in 1906, and a new building was built for them in 1920.  Women on the frontier were often as tough as the men – on infamous lady prisoner, Lyda Southard, became known as Lady Bluebeard, because she was convicted of murdering several of her husbands to collect on life insurance policies.  Another lady was incarcerated there when she drove her wagon by the house of her husband’s mistress and tried to kill her.  Is is one of history’s first drive-by shootings?

The prison did have a gallows, and over the 101 years, ten prisoners were executed there.  The first nine were carried out in the rose garden, which was planted there in order to give the inmates some worthwhile pursuits.  Interestingly, the rose garden was a test garden for the Jackson and Perkins Company.  If you have any Tropicana roses in your yard, first sold in 1962, they were tested here at the same site where prisoners were executed.  That’s a little creepy!  The roses were kept well trimmed so inmates couldn’t hide among the shrubbery and use the bushes to help them escape.

Old Penitentiary Rose Garden – Where Executions Were Carried Out Early On

Buildings were added over the years to house the growing number of prisoners and make the prison more modern – the original cell block from the days of the territorial prison was converted to a chapel in the 1930s.  Three cell blocks were added in 1899, another in 1952 and the last building was built in 1954.  The 1899 buildings were still not someplace I would want to stay; the only facilities were a bucket that was stored in the ventilation area behind the cells. 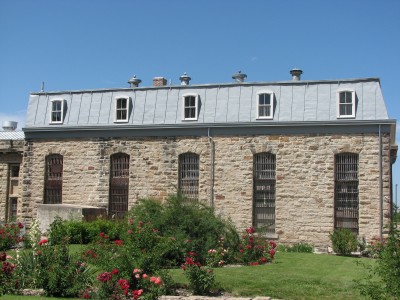 The 1954 building was the maximum security prison, it had its own walled recreation area and these prisoners were not allowed to mingle with the general population.  It was inside this building where the final execution was carried out.  Raymond Snowden was known as Idaho’s Jack the Ripper, due to the way he brutally murdered a young woman by stabbing her repeatedly in 1956.  Snowden was executed in 1957 in the Maximum Security Building.  The gallows have been removed, but the “Drop Room” is still there along with the mechanism for opening up the floor.  Not a pleasant thought.

Apparently, there are rumors that the “Old Pen” is haunted, and I can see why.  13,000 angry, suffering men and women, 10 executions, and likely countless other deaths, from violence and disease might leave some ghosts who have trouble moving on.  Apparently visitors have seen an inmate tending the rose garden, and have experienced being shoved, along with the sounds of voices and heavy footsteps in the various buildings.  The prison has been investigated by Ghost Adventures.

We loved our visit – it was really interesting to see the progression of the buildings over the years.