After the National Center for Civil and Human Rights, I took the subway to the Georgia Capitol Museum.  According to TripAdvisor, they had some interesting free exhibits.  The State Patrol Officer running the security screening seemed surprised when I told him where I was from and why I was there though – apparently this little exhibit doesn’t get much of a draw.  Hey, it’s free and I had some time…

The exhibit is displayed in cases on an upper floor of the capitol building, so as I was wandering around the floor looking at things, state capitol staff were going about their business up and down the hallways.  There were cases dedicated to the flora, fauna and minerals of the state capitol, and the history of Georgia.  There were also some interesting Georgia political stories and anecdotes, including a disputed election in 1946, a dead guy and a couple of men who were both very interested in having the outcome go their way.  It became dubbed the Three Governors Controversy.  You can read about it here.  Fascinating stuff really!

Seeing the inside of the capitol building was pretty cool too.  There is some really nice architectural detail there to check out.  It was worth the stop, even if the exhibit was small. 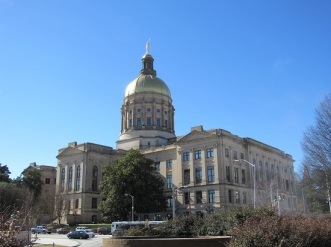 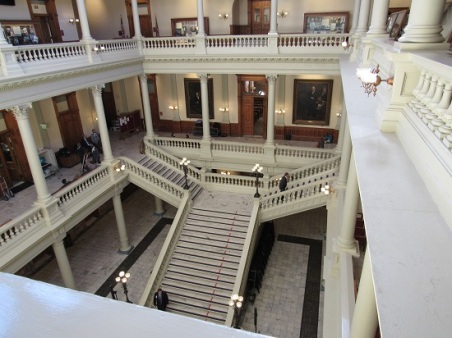 I walked back to the hotel from there, since it was a warm day and it was really only about a 1 mile walk, through an eclectic part of Atlanta.  I enjoyed it – there was so much to see!  Not to mention I walked down Peachtree Street from the Five Points district in Atlanta, which is mentioned repeatedly in Gone with the Wind.  It was interesting to see the real thing, and not just the reference from the book – it sure looks a lot different than Mitchell describes it though!