I’m not sure how I manage to get talked into these things – but this is the third year in a row that I will be completing a half marathon.  And the third year in a row that it will not be the Wine Country Half Marathon in the Willamette Valley of Oregon.  I must be really dumb, because if I’m going to walk 13.1 miles in one fell swoop, there should at least be a wine tasting at the end.

The half marathon is next weekend, and it is a fundraiser for Girls on the Run, which is a non-profit program that supports girls in developing self-esteem and a feeling that they can be whatever they want to be, through healthy lifestyles and running.  I suppose if I’m going to torture myself – it might as well be for a good cause!  I do have high hopes that this will be a fun half marathon at least, because they are advertising the chocolate mile (where you get chocolate at a certain point!) and tiaras.

Yesterday after work my friend Shelley and I set out for our last long training walk before the race.  10 miles!  When we set out, it was sunny and warm.  I knew we’d be getting back after dark, so I brought my flashlight.  And we walked… We talked about all the usual subjects – work, kids, cats, spouses, friends, annoyances…  Somewhere around mile 5, we were all caught up on life and getting bored.  We tried coming up with entertaining things to talk about – but after 8 hours at work and 6 miles down, we were failing.

Somewhere around mile 7, we were getting tired.  During the same 7th mile, it got dark.  At least the moon was stunning – because the walk kind of sucked at that point.  We had an extensive discussion about what we would be eating, if only we weren’t stupid enough to walk 10 miles.  We went through our list of wants: beer, massage, chiropractor, hot bath… and wine of course!  Pumpkin bread was in there too.  The 8th mile we spent talking about how many miles we had left.

Mile 9 was that big hill!  And we talked about that one time I got attacked by the owl.  Yep!  Once when Shelley and I were walking, early in the morning before the sun came up, an owl swooped down and grabbed my head!  I was wearing a hat, so it didn’t hurt, but it sure scared me half to death!  So, that was a plus… last night I was not attacked by an owl!  And mile 10 – at least the end of it – was awesome!  Because we were done!

I would like to say next weekend will be different – that walking 13.1 miles will be a breeze.  But I’m sure we’ll be bored, tired and in pain.  But in the end I can say I did it again!

Over the weekend, Jon and I hosted our first blind wine tasting party.  I blogged about the rules in a previous post, here, if you want to know how I intended it to work.  A few weeks ago I put out the invites and everybody selected a different varietal.  Somewhat oddly, we ended up with a near perfect balance of 6 whites and 7 reds.

My Dad was generous enough to do the honors of keeping things truly blind.  Guests bagged their wines before they came in the door, and then my Dad uncorked the wines, mixed them up and labeled them with letters.  So nobody knew which wine was in which bag.  And even if you thought you knew the shape and color of the bottle you brought, you quickly forgot once the festivities got underway!

While Dad was busy uncorking, I had everybody introduce themselves, and explained the rules, and handed out score sheets and tasting notes.  Yes, that’s right.  I’m a nerd!  I trolled the internet and my wine books for notes describing the characteristics of each varietal.  I tried to make them as helpful as I could.  The rules of the game were simple; each guest had to taste each wine and guess the varietal.  They could get a bonus point for guessing the right region.  There was no penalty for incorrect guessing.  As soon as Dad had the wines were ready to go, the party began!  (And yes, in case you were wondering – I party with my parents.  I’m sure that makes me old.  But hey, they are fun!) 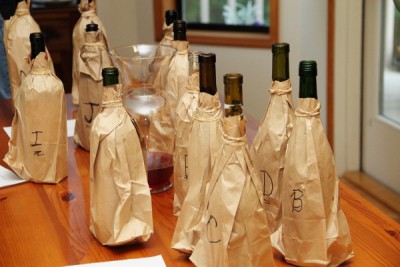 Once everybody got down to tasting, it was hysterical!  There were as many different types of tasters as people at the party.  One friend pored analytically over the tasting notes while tasting and tried to find the identifiable scents and tastes.  He was so serious!  But interestingly, he finished before any of the rest of us.  Some tasters wrote down their first guess and did not waver.  Others scratched out their guesses several times.  The ladies were laughing uncontrollably as we tried to figure out the wines.  One of the ladies (I can’t remember who now) was wandering around saying (multiple times), “I’m looking for melting butter.”

We all were confused when we got to Wine “F”, which was a white wine.  It poured red!  My mom dumped it out the first time because she wanted to taste all the whites first.  I kept my mouth shut and pondered to myself, because I thought my Dad had made a mistake and put a red in with the whites – but he is an engineer, and normally so meticulous!  So I tasted it and knew instantly that it was a Muscat – a Black Muscat!

As for me, I did really well on the whites – I guessed all 6 correctly!  The reds were a different story.  They were tough!  I couldn’t even guess the Cabernet Sauvignon correctly – none of the wines seemed very oaky, and they were all smooth and delicious.  The further along we got, the tougher it was – thank goodness we had the region bonus points!

When everybody finished up with their tastings – we did the big reveal.  I had everybody guess which varietal they thought it was before I opened the bag.  We almost peed our pants laughing when I asked for a guess on a white wine and one of Jon’s friends called out “Merlot!”  Much hooting and hollering occurred when we got a wine right!  It was like being in South America when the home team scored a soccer goal!  The winner for the most correct guesses received a bottle of wine, and we gave a magazine on wine for the guest who got the least correct.  That was a 3 way tie for the worst score – 1 point (out of 26 possible)!  So I had them duke it out via a rousing game of ‘rock, paper, scissors’ for the prize.

All in all, the party was certainly fun, and definitely something that I would host again.  I think everybody had fun – at least I hope everybody did!

Stopped by the Yaquina Bay lighthouse. Built in 1871, it sits 161 feet above sea level, and was decommissioned in 1874. It was relit as a private navigation aid in 1996. #historiclighthouse #Lighthouse #Oregoncoast #vacationmode #tourist #exploring
Day 1 and day 2 agates! And some fossils thrown in for good measure! #rockhound #agates #vacation #MondayMood #vacationvibes #Oregoncoast
Practicing with the photo ball this morning. I'm liking the artistry... #landscapephotography #photography #oregoncoast #beaches
A little bit of work for an awesome reward! #Oregoncoast #sundayfunday #girlstrip #weekendvibes #vacation #girlswhohike
A morning spent wandering the beach and looking for agates and seashells. Found some good ones of both, and teeny tiny sanddollars! #vacation #beachcombing #sundayfunday #weekendvibes #rockhound
Played around a bit with my photoball this morning at the Peter Iredale shipwreck. A wonderful subject! #photoball #photography #vacation #weekendvibes #crystal
Yesterday was my first day of my vacation. We literally had to run to catch the sunset but it was beautiful! #beach #sunset #relaxing. #vacation
Obligatory tank walk #selfie from earlier this week. #Lunchtime #walking
It was a beautiful morning for a hike at the Stimpson Nature Preserve. The woods do my soul a world of good... #hiking #girlswhohike #nature #OptOutside #PNW #summer
Waiting for the vet to open to drop the cat. Don't worry he's ok; just getting some stitches to close up a stubborn wound that won't heal. #selfie #FridayFeeling #almosttheweekend