On June 21st, my dear sweet Oliver passed over the Rainbow Bridge.  As you know, he had Fibrosarcoma for about 18 months, and had two surgeries to slow its progression.  Sadly, these tumors are almost never cured, and his had grown large again…

I brought him home from the shelter in 2005, about six weeks after Zorro died.  He was a little over a year old at the time.  Full of spunk, and ready to give his older sister Martini a run for her money.  He was long and lanky, and much bigger than her, but he never quite had the courage to stand up to her when she laid down the law.

Martini (Black and White) Ruling the Roost – Oliver (Orange), Concerned about getting beaten up!

After Martini died, I realized just what a lap cat Oliver had always wanted to be.  He proudly took up his spot on my lap during movies and snuggled against my chest at night.  He loved sleeping in his puff by my computer.  He hated when Coraline bullied him out of his spot, but sometimes she just wanted to cuddle.

Oliver was never much into people food, but loved to chew on things.  Paper, the corners of the furniture, the corners of books – there are quite a few items around my house that bear his tiny teeth marks.

He also loved to drink water out of the faucet, and would turn up his nose if the water in his bowl wasn’t fresh enough…  He would wait until I stirred in the morning, but once I appeared as if I might be awake, it was a free-for-all to get me out of bed for his breakfast.  He got smart in his later years though and wouldn’t leave his perch until it was clear that I was going downstairs, lest he get rudely kicked out of the bedroom so I could snatch another hour…

He loved sleeping under the covers with me

Oliver and I on our last day

I hope you are having a good time in heaven, Oliver; you are sorely missed…

Oliver is still here.  His tumor keeps growing; I have taken to calling him Quasimodo, because he looks like a hunchback.  It is hard to tell in the photo, but it is large and firm.  It is more uncomfortable for him now when I give him his fluids, since I imagine the fluids don’t feel good when they stretch out his already stretched skin.

Despite all this, he is purring, eating and still jumping up on the bed, so I guess it isn’t time yet.

This dear boy had a hard night the other night.  He wasn’t waiting at the door when I got home and I found him sleeping hard in a closet where he rarely goes.

He only ate a little dinner and then was in some pain, although he did settle down on my bed and slept peacefully all night.

It was a fretful night for me, but the next day he seemed better.

You can see how large his tumor has gotten in the photo.  It is the hump he sports on his right shoulder…  It is growing quickly, and I can only imagine it is infiltrating his heart and lungs.

Thankfully, he is usually doing well, purring and eating and thumping his little sister when he is tired of her bothering him.

I’ll take all the time I can get with him.

Oliver wants to know why I woke him up… 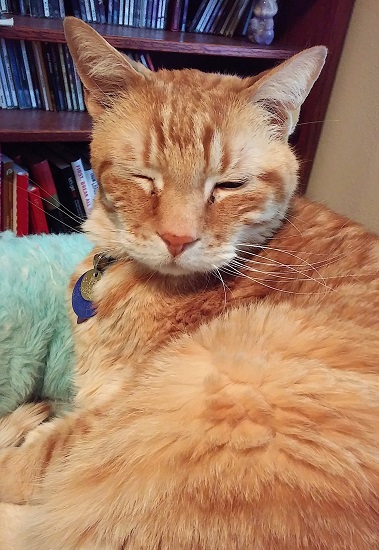 Oliver is enjoying his time spent cuddling with me more and more.  He sleeps the sleep of the dead at night…  The other night he was lying down, waiting for me to finish folding the laundry and go to bed.  I tucked the duvet up around him and he just stayed like this.  What a cutie!

Oliver had a hard weekend.  His tumor has grown more, and his breathing seems a little impacted, so I bundled him over to the vet on Saturday morning to check on his tumor’s progression.  The vet heard his breath changes too, and we put him on a steroid to help relieve the inflammation.  The first dose was Saturday evening.

Sunday morning Oliver wasn’t feeling well, and I found him hiding under the bed.  His tumor was more swollen, and felt warm to the touch, and he wasn’t very interested in his breakfast.  I canceled my plans for the day, and we snuggled in to watch a movie in the morning, while he settled down some.  I ended up getting the deck ready to be cleaned and then scrubbing about half of it.  That is a lot of work!

He was perkier in the evening and ready for dinner before snuggling in for the night.  Overnight he did more roaming too, restless before coming back to bed to snuggle more.  I didn’t give him the steroid again, just in case his discomfort was a result of the medication.  This morning he was ready for breakfast, but then went to curl up somewhere out of the way afterwards. 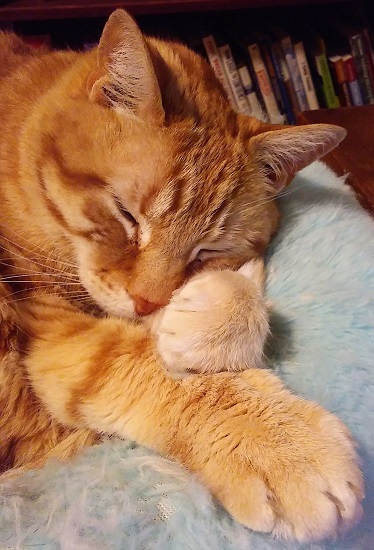 Oliver getting a well deserved nap

I talked to the vet today and he says it is more likely that he is fighting an infection in the tumor tissue than swelling caused by the prednisone.  So, back on the med, and watch and wait for a couple days to see if the swelling goes down.  We’ll see how he does.

Oliver’s health seems to still be holding it’s own, even though his tumor is growing.  It is currently about the size of a lime, nestled in between and under his right shoulder blade.  It is just this hard lump, visible under the skin – you can absolutely feel it.  So far, it doesn’t seem to be painful to him, so that is a positive.

His appetite is good, and he still enjoys snuggling with me every chance he gets.  He likes to be warm under the covers.

Oliver loves boxes, even if he can’t fit…

I continue to just try to be grateful for the time I have with him, not knowing how much longer that will be.  No matter what, it will never be enough.

I felt it last night, before I started to get ready for bed.  That familiar hard bump nestled in next to his shoulder blade.  His fibrosarcoma has again sent its tiny tendrils out to make a new tumor.  He has had two surgeries already; I knew the second time that there would not be an option for another.  It wasn’t a matter of “if” it would come back; it was a matter of when.  And the when is now. 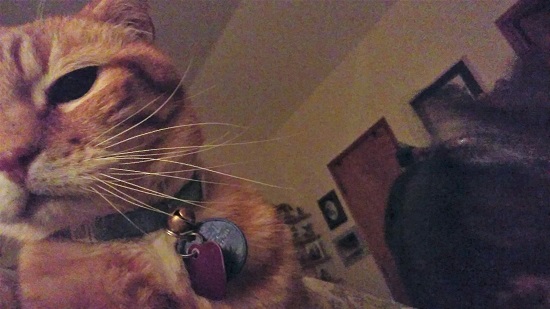 Oliver and Cora (blurry on the right) demanding breakfast

He already had an appointment for his routine kidney bloodwork this Saturday, but now they will confirm what I already know.  Oliver’s days in my world are coming to an end, but only God knows how many more I get with him.  It all depends on how fast this stupid tumor grows, and how quickly it takes his quality of life.

My heart is breaking…

Oliver has had a bit of a rough year.  In January, he was diagnosed with a fibrosarcoma, a cancerous tumor that cats sometimes get at their vaccination site.  There is some disagreement, but there is a body of evidence to suggest that rabies vaccines are the cause, due to over-vaccinating, and the high dose of the vaccine compared to the small size of the cat.  Talk to your vet about this – maybe your cat doesn’t need a rabies vaccine.  I wish I had known…

At any rate, Oliver had a surgery to remove the tumor, and we hoped that it wouldn’t grow back.

Two weeks ago, Oliver had another surgery, to try to get the tumor that was quickly growing back.  The vet and I had talked it over and decided, given how easily his recovery had been the first time, to go for it.

The tumor, and the surgery, was a lot bigger this time around.  The vet found more growth and spreading, and wanted to be aggressive in trying to get it all.  Clear margins around the tumor are critical to prevent its growing right back. 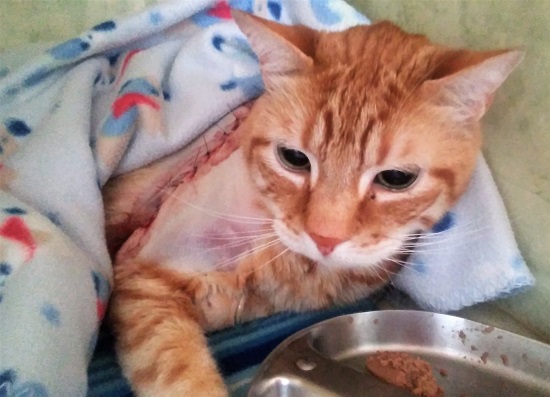 Oliver at the hospital, the day of his surgery

This time, Oliver had a much rougher time in recovery.  There was a lot more open wound, a lot more swelling and edema, and a lot more bleeding.  Oliver was in a lot of pain for the first 4 days.  My heart broke to hear him cry when his dose of pain medicine was wearing off.  I second-guessed my decision.  He hardly moved at all those first few days.  He didn’t eat much, didn’t drink much and didn’t pee and poop much.  I made his wet cat food into a liquid slurry to get more fluids in him.

He didn’t like his antibiotic pills, his pain medicine made him into a drooling zombie, and he hated when I tried to put shirts on him to prevent his blood from oozing everywhere.  I felt like a big, mean, jerk. 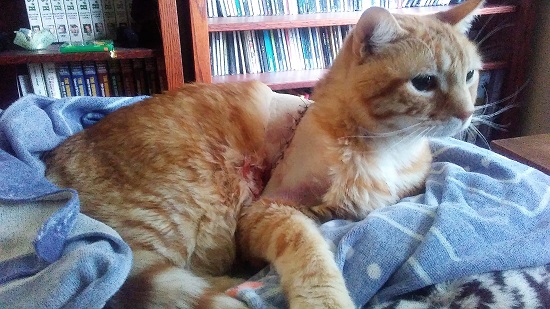 Oliver relaxing, the day after the surgery

Fortunately on the 5th day after his surgery, he was feeling a bit better.  He is getting back to his old self now.  Two weeks out, he can jump up and get around like normal.  He isn’t in pain.  He got his stitches out yesterday and is healing nicely.

Oliver 12 days post-op – getting a drink! 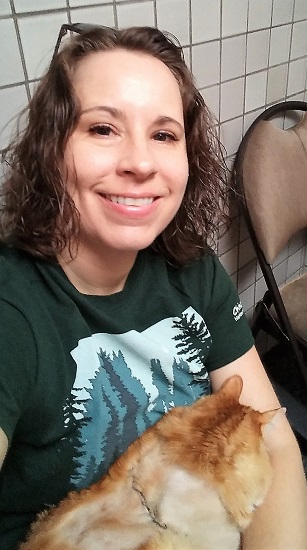 Maybe if I hide, she won’t see me. At the vet to get his stitches out.

As for his cancer?  It is unlikely that this will be the last of the tumor – it will probably come back.  Getting old sucks.  When the tumor does come back, there isn’t a whole lot I can do.  Enjoy the time I get with him and love him as much as I always have.