Our city library has a library book sale four times a year (well, at least we did before COVID).  In a community of strong readers, that bodes well for finding some interesting books! 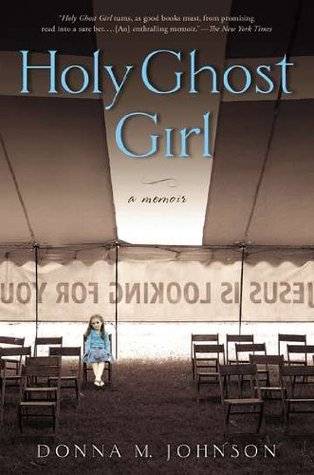 Donna M. Johnson led a fascinating life, growing up as a child traveling with an itinerant preacher who conducted tent revivals throughout the South in the 1960s.  Holy Ghost Girl is her story.

Brother Terrell was a charismatic preacher, known for large, long tent revivals, with plenty of preaching, singing, and faith healing.  He fasted, sang, played guitar, preached the gospel and healed the sick, often with dramatic hands on displays.  Young Donna’s mother was the organist, so she and her brother attended revivals and lived with the group on the road.

It was a strange life for a child, made even more strange by Brother Terrell’s affair with Donna’s mother, and a successive list of other women.  Not to mention that pesky little issue of the money…

She is upfront and candidate about the trials of her childhood, as well as the impacts it has had on her adult life.  She has struggled with her faith, after seeing Brother Terrell live in a way that was inconsistent with his messages to his faithful.

The book is an enlightening look into a world that is little known and explored.  Although tent revivals are largely a thing of the past, charismatic religious leaders still sell faith through the U.S.  Promising eternal salvation – for a price.  Johnson provides a unique behind the scenes look at a community not many experience.