Everything is F*cked: A Book About Hope, by Mark Manson

Mark Manson tells it like it is.  Without sugar coating, without appropriate language and without apology.

And yes.  Before you even ask, this post is equal parts book review and my opinion on the state of society these days… 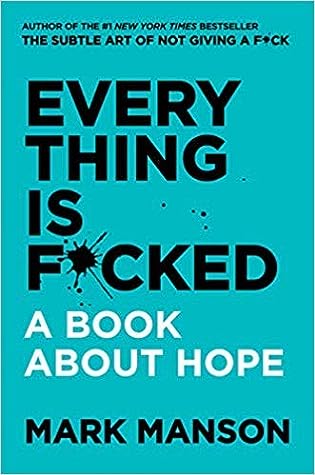 Global statistics tell a story about the world’s residents, and especially Americans, being better off than we have been at any time in the past.  We are more affluent, and less likely to be killed by any number of diseases that used to run rampant, and exploitation through slavery and other forced labor, while it still exists, is at a historic low.  Yet our PERCEPTION is that we are worse off now…

Americans have adjusted our expectations to expect that the minimum standard of living is to own a cell phone with unlimited data plan, at least three streaming services, two cars per household at a minimum, and that any home less than 2,000 square feet is not worth having…  People have all the conveniences of modern life, including riding lawn mowers, chainsaws, power wheelchairs, electric bikes, RVs, and everything else under the sun, and yet people won’t walk a half a mile these days…  Have we created our own crisis of hope?

Manson details the story of Elliot, a successful financial broker who gets a brain tumor.  Elliot’s tumor is excised, but he is left as an apathetic man; in short, he has no ability to give a f*ck.  He is seen by a multitude of doctors, who all give him a clean bill of health.  He has the ability to think rationally, he has the ability to make decisions, he even has the ability to cognitively know what he should do, based on his memories from before surgery.  But he can’t bring himself to care about the outcome.  He loses his job, his wealth, his wife, and his relationship with his kids as a result of choices that do not reflect his best interests.  But why?

He finally finds a doctor who determines that the surgery has damaged his “feeling brain.”  And we need that part of the brain, just as much as we need the “thinking brain.”  In short, we can’t make good decisions for ourselves without the feeling brain.  Manson hypothesizes that the feeling brain is what is really driving the bus, while the thinking brain is really just trying to keep the bus from careening off the cliff.  It’s a balance.

And, Manson goes on to explain, we have become so acclimated to having it easy that we have begun to associate a little inconvenience with real suffering.  The brain is hardwired to get used to what it is given.  You experience a tragic event, and over time, your brain simply begins to process it as the new normal.  You can stay on Cloud Nine forever, and on the flip side, you can’t stay in crisis mode forever.  The brain just adjusts.  The funny thing is though, that if there isn’t a real crisis, your brain creates one around an event that wouldn’t otherwise be a big deal.  We begin to see devastation and drama where there really isn’t any.  We rage about inconveniences, or about things that our ancestors would have told us were simply not an issue.  Because they had real shit to worry about, like whether or not half of their children might survive to adulthood.  Or whether that broken arm would kill them.

We have it good people.  We have it really good.  So why have we become programmed to think that we don’t?  If we can’t shift this focus, we truly are f*cked.