The second winery that we visited in Boise was such a surprise!  Who knew that we would find Oregon Pinot in Idaho?  Turns out the owners, who live in Boise, purchased a 50 acre vineyard site near Salem, Oregon.  They worked to build the vineyard and opened the winery in Carlton, Oregon, but moved the winery in 2012 to Boise.  They opened their downtown Boise tasting room in March 2013.  The grapes will continue to come from their vineyard site in Oregon.

We started our tasting with the 2009 Pinot Gris.  It is 98% Pinot Gris and 2% Riesling, and is full of aromas and flavors of honey and pear.  It is a more creamy Pinot Gris, rather than being crisp and acidic.  I tend more towards the crisp, citrus Pinot Gris, but if you like a creamier Pinot Gris, you will love this one.  We had the 2011 Rose next, a light Pinot Noir Rose with strawberry and light cream flavors and vanilla on the finish.  It had far less citrus flavor than is typical in a Rose, but the heavier mouth feel and creamy flavor will appeal to many.

The 2010 Willamette Valley Pinot Noir had strong flavors of black cherry and spice – without overpowering tannins.  I really enjoyed this wine, and it is very reasonably priced at $25 dollars a bottle.

The last two wines we tasted were two different expressions of the Pinot grapes in their vineyard, the 2009 Judith Marie Pinot Noir and the 2009 Donna Jean Pinot Noir.  The Judith Marie has flavors of fig, date and mocha, and a smoky toast flavor on the finish.  Jon preferred this one.  My favorite was the Donna Jean, with stronger blackberry and plum flavors mised with smoke and wood aromas.  Both were excellent, both were young and I’m sure both will be even better after a bit more time in the bottle.  Of course, they are both sold out now, so you’ll have to get the 2010, which I have no doubt are just as good.

The owners, Lonnie and Judy, came out and chatted with us for a bit, taking a break from their barrel cleaning chores.  They were very friendly folks, and we chatted about marathons and the upcoming wine country half marathon.  Sorry there are no pictures, but I was just enjoying the wine so much!  It is certainly a place we will visit again!

During our Boise trip, after we went to the World Center for Birds of Prey, Jon and I spent some time just relaxing without an agenda.  Here are a few of the highlights:

BitterCreek Ale House:  The food was great (we each had a salad) – and they have a lot of local micro-brews to choose from.  For days when it isn’t quite so hot (it was 104 the day we were there), they have outdoor seating available on the sidewalk.

Record Exchange:  Jon liked this local downtown music store – he browsed their albums for a long time.  They have an adjacent coffee shop and cafe that is attached to the store, and it also sells kitschy and novelty items, so I had some perusing to keep me occupied.  They have a bunch of funny greeting cards, and cute gift items.  And maybe the best part, the cafe booths offered me an opportunity to sit down while I waited for Jon to finish shopping!

Aspen Leaf:  This is one of those pay-by-the-ounce frozen yogurt places in downtown Boise, and Jon and I split one topped with raspberries and Reese’s Peanut Butter Cups.  Bad for the waistline, but great for the soul – delicious! 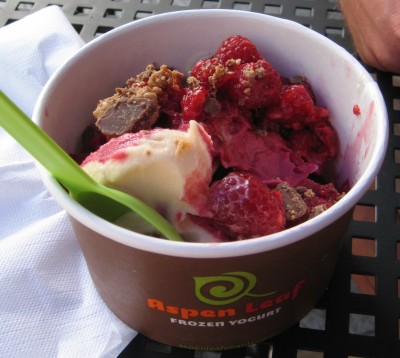 Cycle Pub:  While we were eating our frozen yogurt, we were amazed to watch a man piloting a pedal-powered bar down the street.  He was all alone when he rolled onto the street, but before very long, several people had hopped onto the strange contraption.  Apparently you can book this thing for a rolling pub crawl – with a bit of exercise thrown in!

Cycle Pub – A Pedal Powered Pub Crawl with your Friends!

The Old Assay Office: Now you didn’t think that having no agenda would really mean no historic buildings right?  We visited the historic Old Assay Office, built in 1871 to weigh and value minerals and gold brought in by Idaho’s miners.  Between 1872 and 1933, millions of dollars a year came through this office – some estimates are over $1.5 million each year.  The Office was constructed of sandstone in the Italianate architectural style, and the top floor was occupied by the chief assayer and his family, and the security guards lived in the basement.  The building is now the office for the Idaho State Historic Preservation agency, and the grounds outside are a city park.

Wineries:  Jon and I had time for two tasting rooms while we were in town.  We were already downtown, so we checked out a couple in the downtown core, the Snake River Winery and Mouvance.  I’ll post about them separately, but both were great – for very different reasons.  Snake River is making wines with Snake River Valley fruit, both estate grown and sourced from other vineyards.  Mouvance is bringing in their fruit from their family owned vineyards in the Willamette Valley, specializing in my favorite red, Pinot Noir!

We had a great time in Boise, and will certainly go back!  It was a big city with a small town feel – clean, easy to get around, and (at least for us) no big city traffic congestion!  The downtown core had a nice feel and I loved our drive through the area of historic homes.  Although it was way too hot while we were there to take advantage of the many recreational opportunities (103 to 107 degrees the days that we were there!), we would love to go hiking next time we visit.  Antiques Roadshow introduced us to a whole new, beautiful city!