One of the neighborhood does had twins this year, and they are out and about with their mother.  I was lucky enough to get some photos of the babies the other evening!

One fawn peeking out from behind a tree

Both looking the same way! 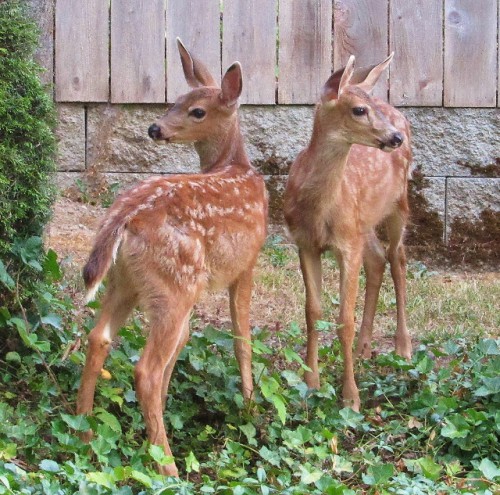 In an attempt to get me to California again after I told Jon that our next trip would not be in Cali, he signed up to run his first ever full marathon on December 8th.  The California International Marathon.  In California.  But with those sweet puppy dog eyes and his desire to do the run where the weather was warmer, and where he lived for a few years, how could I say no?  Yes, I’m a sucker…

So off we went.  As is usual on our road trips, we headed out directly after work the first evening to get a jump on the drive.  The first night’s drive was to Eugene, and there was a risk of snow.  Luckily, it held off, and we spent the night in Eugene under cloudy, 17 degree skies.  We got up early – before 6!, after arriving just before midnight and getting only about 5 hours sleep.  Next up, the drive from Eugene to Sacramento.  We got on the road just after 7 – after scraping all the windows and spending several minutes warming up the car.  The Siskyous awaited.  Of mountain passes, the Siskyous can be treacherous in snow, with the highest elevation at 4610 feet!  Fortunately, we passed through bare and mostly dry roads, with only a light dusting of snow on the ground at the edge of the road.  We heard that Eugene got 7 inches of snow later that day – so we certainly lucked out… 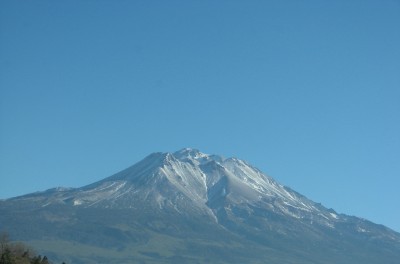 The rest of the drive was uneventful, with us enjoying a few of the vantage points along the way, and a quick stop for a lunch at Subway.  Then we made our way to just outside of Willows, California.  Willows is home to the Sacramento National Wildlife Refuge.  I had read about it on the internet, and saw that December and January are the peak season for the refuge, when it has the highest numbers of migrating birds for the winter.  Jon wasn’t as excited about the refuge, mostly because it is about 75 miles north of Sacramento, and he was envisioning driving all the way back to the refuge after we had already arrived in Sacramento.  When I told him we could stop on the way down (assuming the drive didn’t take too long), he checked out their website and got a bit more intrigued.

For a little history, the area where the Sacramento National Wildlife Refuge sits was once known as the Colusa Plains, a windswept plain with short grasses and shrubs.  However, much of the area in Sacramento and immediately surrounding it was a wetland delta.  It would flood in the winter, and dry out in the summer.  That makes for extremely fertile soil, with all the nutrients which are deposited there during the seasonal floods.   Before the turn of the last century, settlers began damming the creeks and rivers to prevent the delta from flooding.  By the 1930s, the landscape had been dramatically altered.

Red Tailed Hawk Checking Us Out

The Emergency Conservation Fund Act of 1933 was tasked with providing habitat and breeding areas for migratory birds, because so much of the original wetland areas had been lost to agriculture.  Bring in the Civilian Conservation Corps during the Great Depression, who set to work creating this area of now federally protected land, using bulldozers and shovels to artificially create a delta.  The flooding is mechanically induced each season, with a series of pipes and valves releasing water from the river into the delta.

Ring Necked Pheasant – Out for an afternoon stroll

The Sacramento National Wildlife Refuge is part of a complex of five different refuges, and three Wildlife Management Areas that are administered together by the U.S. Department of Fish and Wildlife.  Admission is $6 to the refuge for the day, or an annual pass is a steal at $12 – the other refuges in the complex have no admission fees.

The birds don’t care whether the flooding is natural or man-made.  They have flocked back to the area over the years, with MILLIONS of ducks and geese, songbirds and hawks overwintering here.  There is a 2 mile walking tour, where the birds were not hanging out the day of our visit; but we did see muskrats (or otters, not sure which), some mallards, deer, and Jon saw a jackrabbit.    There is also a 6 mile driving tour, which you can do at your own pace.  The day we were there, there were only three other cars, so we mostly felt that we were entirely alone.  They will even loan you binoculars at the visitor’s center (we brought our own).

In a word, we were awestruck – the sheer numbers of birds on the marsh, feeding, sleeping, preening and occasionally taking flight, was spectacular.  We saw hawks watching birds, and even saw a hawk with a kill (he was a bit too far away to see what he had though).  We saw great egrets hunting, deer wading in the water for better feeding grounds, and we even saw two ring necked pheasants.  This is easily a few of the best hours I have spent in my life. 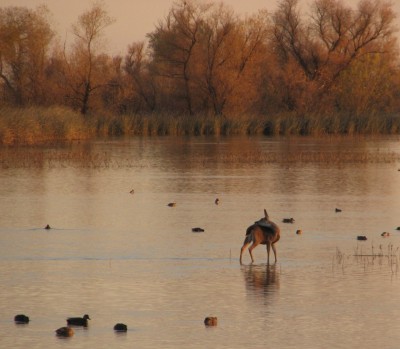 Getting in a Scratch While Crossing the Delta

We watched one of the most beautiful sunsets I have ever seen, and then continued on our way to Sacramento.   And almost a month later, Jon is still saying this is one of the best experiences he has ever had, so if you can, GO. 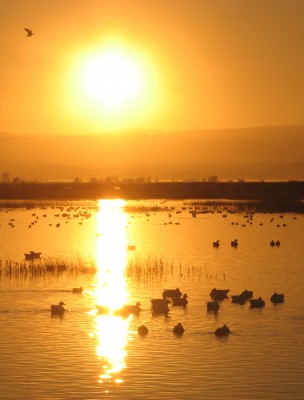 The Sunset at the Refuge was Fantastic

There is nothing quite like an upcoming vacation to lift the spirits. Jon and I have not been out of town on a vacation for us since August, and it has been weighing heavily on our souls. Of course, we were incredibly busy for a period of time, selling and buying houses and moving, but now that things have settled down we have both been itching to get out of Dodge. So the stars finally aligned and Jon and I are getting away soon on a road trip. We booked hotels! It was incredible, this feeling of having days off on the books. We were practically giddy!

It does leave us with some work to do to decide what sights we want to see. We will want to do some wine tasting, but other than that, we haven’t decided. Of course, being winter in the Northwest, it will likely be raining during our trip, but we can’t let that stop our fun! The other certainty is that I will be taking a lot of photographs. When my computer crashed last summer, I lost a lot of my photos, and I’m eager to start replacing them! It’s kind of funny, because I love taking photographs, and I love sharing them with others and looking back on them later. But I’m as guilty as anyone of not always pulling my camera out as often as I should, I suppose for fear of looking too touristy. I have been roaming around with a small purse lately, but I think I’m going to switch back to a larger purse that I can easily fit my camera in.

So, today is itinerary planning day.  At least get some sort of idea of how far things are from each other, so we know what we might be able to fit into each day.  We will use that as a guide, but what is a vacation if you can’t deviate from the plan too?  Yippee!

And in absolutely, positively, unrelated news, we had a fabulous time entertaining my in-laws yesterday afternoon and our friends last night.  And when we were finally putting the house to bed close to midnight, we saw the most beautiful, HUGE, deer standing in our yard.  It was so healthy, with a gorgeous sleek coat!  The perfect end to a wonderful day.  It was too dark to get a picture out the window, but wow, how neat…