Marilyn knows about a million little roadside cemeteries and we checked out a number of them in those couple of days.  Some were tiny, some were larger, and they were in various states of being cared for.

The earliest graves we could read were from the 1830s.  We just don’t have that on the west coast, and I loved these little community plots. 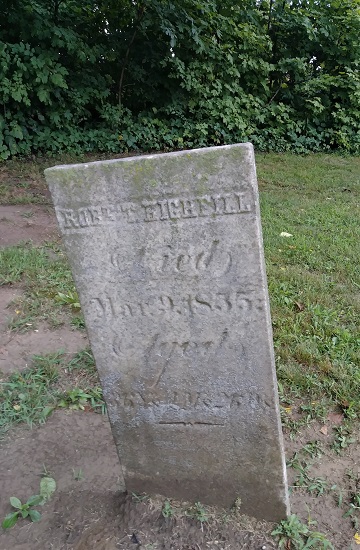 Robert Highfill died on March 9.  Findagrave.com lists his death year as 1855, but the stone looks to me like it says 1835.  I’m sure the 1855 date is correct, as the census records show him marrying his wife in 1845.  Interestingly, he is buried in Highfill Cemetery, so apparently the cemetery was named after the family.

Here lies Frances Remley Johnson, the wife of Robert Johnson.  She died in October, 1837 at the age of 28.  The location of the grave has probably been lost, and that is why her stone is leaning against the tree.

William Malone was a Freemason; he had the Masonic compass on his grave.  William was born in 1785, and he died during the Civil War, but his death date is unknown and is unreadable.  If he did indeed die during the Civil War, he had a pretty long life…  He was married twice; his first wife Sarah died in 1851, and is buried nearby.

Tuesday evening we ate leftovers for dinner, went and got ice cream for dessert, and then decided to go find another cemetery in the back of a cornfield.  It seems weird writing that, but the Pisgah Burying Ground is an active cemetery, that is literally tucked in behind a cornfield.  It was getting dark when we visited, which made for some eerie photographs.

We went back to the Pisgah Burying Ground the next day in the daylight, and found a well tended graveyard that had none of the creepiness of the night before; the caretakers were there mowing the grass.

Here lies Sebert Pearman; Sebert is another unusual name, meaning “shining sea.”  He died on January 19, 1853.  He was born on January 16, 1793, which meant that he was 60 when he died.  According to information at Findagrave.com, “he was the son of Randolph Nelson (Randall or Randalf) and Judith Pearman. He was a millwright by trade. He was a veteran of the War of 1812 in the Kentucky Militia. He moved to Vermillion County, Indiana in 1829. He married Sarah Rose Nichols February 15, 1815 in Breckinridge County, Kentucky. They were the parents of: Malinda, John, Mary (Francis), Jane Weltha, Benjamin Franklin I, Samuel D., Elizabeth, Sarah Wright, Judah Ann, William II, Elisha, Martha, Sebert Jr., David and James.” He had 12 kids!  Well, perhaps better stated – She had 12 kids!  An urn on a grave is a symbol of the soul, immortality or penitence.

The next morning before I headed on my way, we tried to find another old family burial plot, this one on Marilyn’s land behind a soybean field.  Unfortunately, a few years ago, thieves stole the wrought-iron fence that surrounded the plot.  When we visited, we were unable to find the stones, but found the ground cover that had been planted marking the plot.  It would be sad if someone stole the headstones too.  The plot had been in that thicket of underbrush on the right side of the photo below; not exactly something you would stumble across.

Marilyn and I got up for a day of Indiana countryside sightseeing.  We decided we were going to check out several covered bridges, as this tri-county area around Dana, Indiana is known for having many of them.  Unfortunately, the very first bridge we went to, at the Ernie Pyle Memorial Rest Park, we came upon a tragic scene.  I won’t revisit it here, because I blogged about it last year.

That day we visited a number of bridges, historic cemeteries, murals and the General Lew Wallace Study & Museum.  I’m going to divide the posts up by subject, and group the photos together.

Once we steeled our nerves again from our morning, we saw several more covered bridges.  They are gorgeous, each painted red with white accents, each with the same neat, black lettering indicating the year it was built, along with name of the bridge and sometimes the builder.  The earliest bridge we saw was built in 1873, and the most recent was built in 2006.  I suppose now they are probably maintained by the county, or a historical society, but it still seemed odd that they are all painted the same.

They are scattered all around, with some of the bridges off to the side of the road, and others still part of the road so you could drive through them.  One is close to an old historic mill that has been redeveloped – it is quite picturesque!  I got to see quite a bit of the countryside, the Amish homes, and even a few Amish buggies. 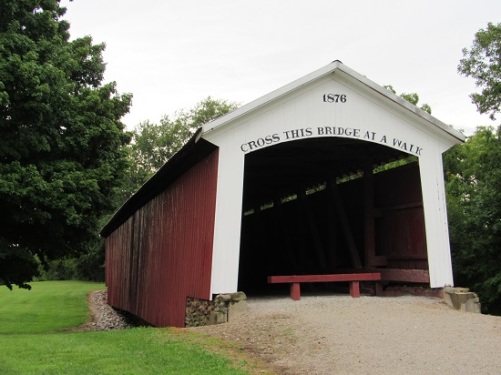 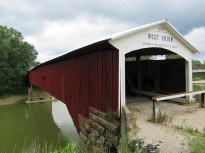 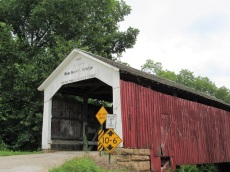 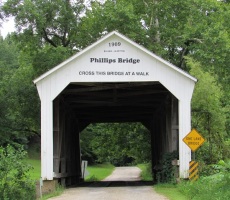 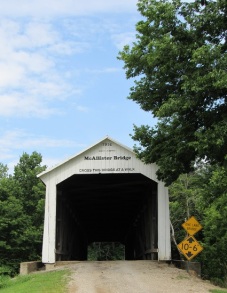 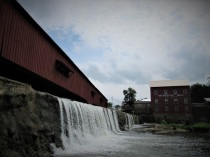 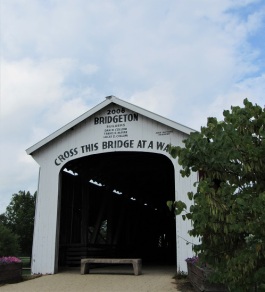 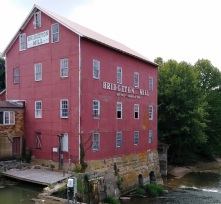 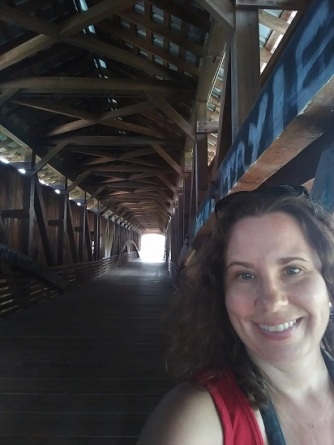 The history here is incredible!