After I finished the Oregon Wine Country Half Marathon, it was time for the wine!  Never mind that it was only 10 am.  I had already been up for 5 hours at that point, and that totally counts right?  I had seen the sunrise, and sunrises are almost like sunsets, and a spectacular sunset calls for some wine!  Not to mention that almost 3 of those hours were doing high intensity exercise!  I was more than ready.

But where was my cheering section?  Where were my partners in wine?  Allysa and Bob were going to meet me at the end of the race and watch me cross the finish line, but I didn’t see them, and I couldn’t figure out where they were.  Carlton is not that big, so the possibility that they had lost me in the crowd seemed unlikely.  I texted Allysa that I was done!  I got a message back that the GPS had taken them on the scenic route, and they were almost there.  Oops…

So, while I was waiting, I got prepared.  I wandered around looking for water, and stumbled into a vendor booth where they were giving away cans of an all-natural juice/electrolyte/anti-oxidant/miracle drug concoction.  Score – sounds great!  I chose one in Nectarine and something else (Pomegranate?) and cracked it open.  Despite the fact that I had not yet imbibed anything alcoholic, I cannot for the life of me remember what the juice was, but it was tasty.

Now normally I might not wait for my friends – I would have just dug into the wine, but I had to pick up both my glass and the guest glass together, and my guest had to be present.  So, finally, Allysa showed up, and we were ready to taste!  And then Shelley showed up!  We picked up our souvenir etched Riedel wine glasses and headed over to the tasting area.  If you have ever been to Carlton, the festival was right outside in the parking lot of Ken Wright Cellars and the Carlton Winemakers Studio.  There were 29 wineries (Wow!) represented, most with tasting rooms in the immediate Carlton vicinity. 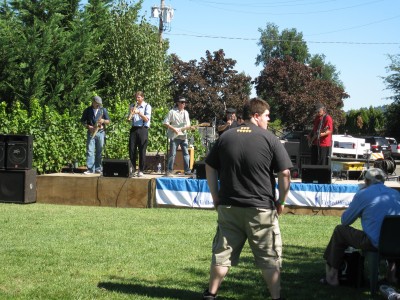 The Band at the Wine Festival

Each winery was tasting between 1 and 3 of their wines, with 2 being the norm.  I didn’t write down any of my impressions, and I must admit I found it somewhat difficult to pay particular attention to the wines (call it fatigue or adrenaline or whatever), so I won’t be giving you any tasting notes here.  Post half marathon wine tasting is an interesting experience, as I learned…  I will say that there wasn’t a bad wine in the bunch.  I tried to focus on wineries that I hadn’t visited before, but unfortunately there wasn’t time (or stamina) to try them all.  I did sample Arborbrook, Cottonwood, Duck Pond, Elks Cove, Ken Wright, K&M, Lemelson, Lenne, Luminous Hills, ROCO, Seven of Hearts and Solena.  I feel like I didn’t even scratch the surface!

Allysa, Shelley and I had a great time, and I made sure to have some big glasses of water in between tastes to rehydrate – I just filled my wine glass with water to make sure I would drink the whole thing before I started tasting again!  Ken Wright was one of my favorites, of course, and I loved the Pinot Gris from Solena Estate.  Lenne had two vintages of their Pinot Noir to sample, you could taste the robust, earthy 2010 next to the more fruit forward, elegant 2009.  Seven of Hearts was sampling a GSM – Grenache, Syrah, Mourvedre blend that offered something different than the Pinot Noir so many Willamette Valley wineries specialize in.  I think the server was a little surprised that I knew the blend in GSM though – I’m sure the half-marathon types aren’t necessarily wine connoisseurs too.

In the grassy patio area of Carlton Cellars, a band played for the crowd, and you could sit and rest your tired feet if you needed to.  We stayed until noon, when the festival was wrapping up, and then we wandered over to a small bakery/sandwich shop on the main street of Carlton to get some much needed food.  I ordered a Reuben sandwich that was delicious!  I had an orange juice too, to get some vitamins and anti-oxidants.  Shelley had a BLT without Dijon mustard, but unfortunately the dry baguette bread didn’t lend itself to a lack of condiments.  Allysa and Bob enjoyed their sandwiches too, but I can’t remember what they ordered.  We sat in the sunshine and soaked up some rays, and then Allysa told me she would do the race next year!  Yay! 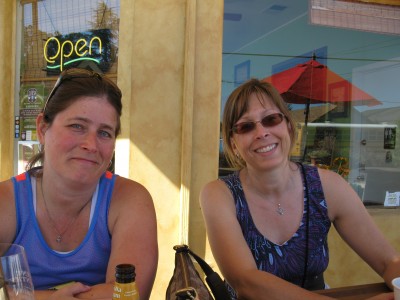 Allysa and Shelley – Waiting For Lunch

So, hopefully, next year, we will have a big crowd of friends all coming down to test ourselves and then try some wine.  Perhaps this is the beginning of an annual tradition!

Today was a long day – not a bad day at all – but a long day.  It started with a great long walk with some friends, up in the Arboretum near my house.  This is always a great workout for my butt and thighs, and I’d like to say my arms got a workout too – swinging to slap the mosquitoes!

Then I showered and ate some lunch and Jon and I headed off to Fred Meyer for a marathon shopping trip.  We are going on vacation soon (YAY!) and neither of us had enough shorts for the hot climate.  And, I needed a new bathing suit too…  Now that’s never a fun trip… So we piled clothes into the cart, did the marathon try-on sessions, and we actually both got some suitable new summer clothes!  And with an extra 15% off coupon!  Then we got groceries too.  And really, that’s enough of a chore for one day, right?

Well, then I went to work.  I moved offices a few weeks ago, with my promotion (another YAY!) and have been so busy at work that I have not had time to unpack my boxes or hang my pictures.  So, I decided that the only way would be to do it on the weekend.  I feel like I got so much done!  8 boxes unpacked and all my pictures hung and only 2 boxes to go!

So, by the time I got home (I had to stop by the store again on the way to get taco seasoning and sour cream) I was ready for some serious kicking back.  Jon opened a bottle of 2006 Hamacher Pinot Noir, from the Willamette Valley.

We discovered Hamacher when we visited the Carlton Winemaker’s Studio in Carlton, Oregon, in November 2009.  We went based on a recommendation from Jon’s grandfather, who lived in McMinnville and was quite knowledgeable about wine.  The Winemaker’s Studio is a cooperative of 14 wineries, so it’s a great place to go if you want to sample multiple wineries in one stop.  The server was friendly and laid back, and liked to tell stories of his upcoming wedding and which wines they were going to serve (I imagine he’s gotten married by now though, since that was in 2009). 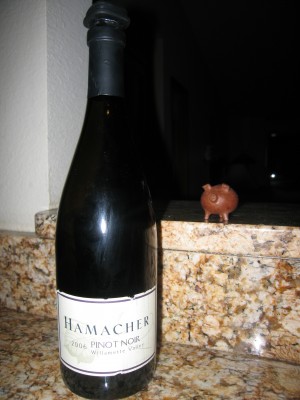 The Hamacher did not disappoint. This wine is red wine and chocolate in a bottle.  No joke.  This wine is the color of a dark ruby, with excellent clarity.  It has a nice light mouthfeel.  And the flavor – yum… It is dark ripe cherries mixed with a velvety milk chocolate.  It is very smooth, exhibiting none of the tart acidity that younger Pinots often have.  The finish, while not long, stayed true to the flavor of the wine.

If you have the opportunity, this is a must-have wine!