Finally, Jon’s day had arrived – the Canyonlands Half Marathon! He had been looking forward to running a half marathon among the beautiful red rocks. The race is a point to point, beginning about 10 miles up Highway 128, along the Colorado River.

I dropped him off at 7:15 am to take one of the busses up to the start of the race. They close Highway 128 for the race, so there is no way for race participants to get a ride there except for via the busses. We said our goodbyes and I wished him luck, and went back to the hotel for breakfast.  I have my priorities.

Since there is not really anyplace where spectators can view the majority of the race due to the Highway 128 closure, this is really my story… I spent a leisurely morning, heading out to Arches National Park to see the exhibits in the Visitor’s Center.

Jon doesn’t always like to watch the movies that they have, so this time I sat down by myself in the theater and watched the whole thing. The Arches movie focuses on the geology of the park and the forces of nature that have created its arches over the last several million years. It also shows the process of erosion, and explains how arches are just a temporary feature, lasting only until erosion breaks them down.

After the Visitor’s Center, I headed back into town, where I passed several of the 5 mile runners, and went to the rock shop just outside of town. This rock shop had everything. You could find all kinds of fossils, rocks, petrified wood and shell imaginable. I spent a while in there, just looking at everything. There was a gorgeous, huge fossilized dinosaur nest, with several intact eggs (not for sale), as well as a carved, stone skull that was beautiful.

For kids (or the young at heart) they distribute cards that entitle the holder to a free piece of dinosaur bone. To collect, you have to follow the dinosaur prints around the store to the shelf where you can choose your piece. I don’t doubt they are pieces of dinosaur bone, but I learned you have to know what you are looking for. There is no way that I would have guessed what I was holding wasn’t just another rock.

Soon enough, it was time to head into downtown and find a parking spot to go see the end of the race. I had enough time to watch and cheer for the runners for about 20 minutes before Jon came in with a time of 1:36:36. I was so pleased with him, especially since the race is at an elevation of over 4,000 feet, and we aren’t used to high altitude! He said it was the most difficult half marathon he has done, and he could totally feel the elevation. 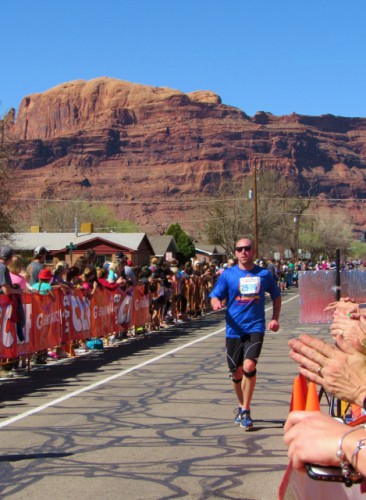 We got him hydrated and then headed back to the hotel so he could take a shower. And then we were off to get lunch! We decided to go to the Twisted Sistas’ Café, a place I had seen reviews for on TripAdvisor. We got there just before it started filling up, and ordered. I ordered the Jamon Serrano Wrapped Shrimp Salad, with chopped romaine tossed with tomato, Kalamata olives and parmesan in a creamy lemon dill dressing, topped with baked shrimp wrapped in jamon serrano.

The most amazing salad!

Both meals were fantastic, but my salad knocked my socks off! The tangy dressing with the salty jamon serrano wrapped around big shrimp. It was so delicious – I will certainly go back again for that meal!

I love my morning walks to the waterfront! Yesterday was a glorious day! #waterfront #morningwalk #PNW #girlfriends #weekendvibes
When you are tryin' to act casual while beggin' for breakfast service... #Caturday #catsofinstagram #cats #weekendvibes
You know it is fall when the puzzles come out. Beer caps from mostly beers I've never heard of! #beercaps #puzzles #fall
Photo ball practice on the Cle Elum river. It was nice to spend some time relaxing... #PhotoOfTheDay #photography #vacation #PNW #Washington #summer
Did some playing with the photo ball at the cemetery today. So pretty! #Roslyn #cemetery #PhotoOfTheDay #photography #vacation #PNW #Washington
Just a bit of day off, back roads exploring... #easternwashington #vacation #CleElum #girlstrip
Saw this young lady as I was leaving for work the other morning... #Deer #wildlife #PNW #morning
Oysters, fish tacos and cider, oh my! Enjoying all the good holiday weekend grub! #girlsday #SundayFunday #HolidayWeekend #LaborDay2021 #summer #PNW
Fun evening cider tasting with the girls! So many good ones! #cider #craftcider #girlsnight #SaturdayNight
I love our gorgeous sunsets! Amazing evenings with good friends and this view! #beautiful #sunset #PNW #Friends #bookclub #Reading