C is for Corpse, by Sue Grafton

What if you knew that someone had unsuccessfully tried to kill you, but failed? 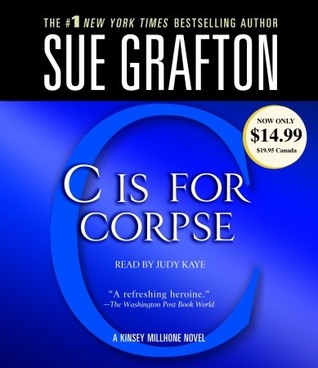 In Sue Grafton’s third private detective story, Bobby Callahan hires private detective Kinsey Millhone to discover who tried to kill him by running his car off the road nine months previously.  Bobby was in physical therapy still trying to heal from his injuries from the crash that also killed his best friend.

Kinsey has to figure out if Bobby really was the victim of attempted murder, and not just some terrible accident.  Things aren’t very clear.  But soon enough the waters are muddied even further, when Bobby is in another car accident.  Was he the victim of another attempt, or is his battered body the cause of the tragedy?

This novel had a lot of twists and turns, and in the end, Kinsey discovers the truth.  It’s an easy, quick read, but it did make me wonder at times if what she described was even possible.  Take it with a grain of salt…