In my last post, we hiked Mesa Arch at Canyonlands and enjoyed dinner and some beer at the Moab Brewery.  We couldn’t linger long at the brewery though, because we had to meet our guide for our astronomy tour.  I had seen it as a “thing to do” on TripAdvisor and it had received great reviews, so I signed us up.  We were scheduled to meet the guide in a parking lot off the side of the main highway at 8 pm – while we were waiting Jon became convinced that we were going to be murdered and thrown into the canyon…  His fears were allayed when four other cars showed up to wait with us.

Soon enough, Alex pulled up – gray haired with a long ponytail, Alex reminded me a lot of my favorite boss.  We followed Alex out to the site – a viewpoint on state lands just outside of Canyonlands Nationals Park.  As the sunlight was fading he told us the history of astronomy and the invention of telescopes while he set up the telescope we would be using.  It was a dark night with only a crescent moon, and clear skies – perfect for stargazing.

The telescope we used was very powerful – it had a short barrel which combined a glass lens and multiple mirrors to create a telescope that is less susceptible to being damaged in transport than one with a longer barrel.  We took turns looking at each of the astral bodies that he showed us: star clusters, nebulae (the plural of nebula), dead stars, galaxies, two galaxies colliding, and the planets Jupiter, Saturn and Mars.  They were small in the telescope, but it was easy to see what he was talking about.  They were all fascinating!

Alex also explained how, due to the fact that these bodies are so very far away, and how long it takes light to travel all those many miles, we were seeing what happened there thousands, or perhaps millions of years ago.  And if there is life on other planets looking back at us, they are seeing Earth at some point long, long ago as well.  It was tough to wrap my mind around the concept of seeing something that happened thousands of years in the past.

Alex is a Native American from the Apache tribe, and he told some of the Native American stories and oral histories on the stars as well. He also explained that the Puebloan people in the Southwest have an oral tradition that tells the story of Supernova 1054, an exploding star that was first visible on July 4, 1054. The tradition holds that the supernova was visible in the daylight sky for several weeks.

After researching other historical accounts from China, Europe and the Arab world, researchers believe this supernova is what we now know as the Crab Nebula (there is some continued debate on this, however). I can only imagine what our ancestors thought of what was going on in the sky – surely it would have been a terrifying experience!

It was a very informative evening, Jon and I both loved it. Alex was patient and interesting and took the time to explain and answer questions. We were out staring at the night sky for several hours and loved seeing everything. My favorites were the galaxy, Jupiter and Saturn. The evening wrapped up about 11:20 pm and we headed back to the hotel tired but very happy.

In my last post, we hiked the Murphy Point Overlook Trail to one of the most scenic views I have ever experienced.  After that hike, we started back the way we came and parked at the trail head for Mesa Arch.  Mesa Arch is one of the most visited places in the park, for a couple of reasons – it is only a 0.6 mile round trip hike from the trail head, and it is beautiful.

Mesa Arch with the La Sal Mountains in the Background 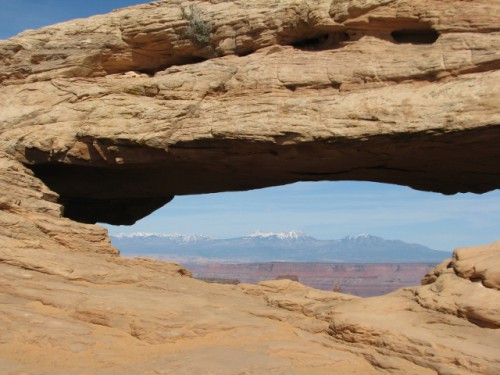 Mesa Arch with the La Sal Mountains in the Background

Mesa Arch, and other arches in the area form when a solid block of sandstone gets cracks in it from pressure from the Earth’s forces.  The cracks get water in them when it rains or snows, and the water makes the cracks expand.  Over millions of years the water erodes the sandstone, causing fins to form, and then chunks of sandstone eventually fall away.  If the sandstone beneath falls away and leaves the stone above, you have an arch!

There were a lot more people at Mesa Arch than Murphy Point, but it wasn’t crowded, and everybody was really polite about taking turns so you could get a photo of the arch without anyone standing in it, or you standing next to the arch. I posed with the arch for a few photos, but of course Jon wouldn’t.  All in all, it was a worthwhile short hike – I love the photos I took there.

Mesa Arch with the Canyon Formations in the Background

Once we finished our Mesa Arch hike it was a little after 5. We talked about whether we wanted to do more, and decided that 4.2 miles of hiking was enough for the day. We headed back towards the park exit, and Jon was nice enough to let me stop back at the Visitor’s Center on the way out and watch the movie that we skipped earlier. It is approximately 15 minutes about the history of settlement and the geology of the park and was pretty informative. That’s when Jon and I learned that most of the roads in Canyonlands had been built to accommodate uranium mining in the 1950s! It was an interesting example of how industry can give a boost to recreation.

After leaving Canyonlands, we drove back into Moab and checked into our home for the night – another Super 8 – and discovered it is the ritziest Super 8 I have ever seen! It had granite counter tops, a built in drawer system along one wall, and laminate “wood” floors. Of course, it was also the most expensive Super 8 I have ever seen – but it was still less expensive than the other hotels we had looked at.  We did a quick change of clothes so we would be prepared for the temperature drop after sundown, and made our way to the Moab Brewery for a quick dinner before our astronomy tour!

There was a 10 minute wait at the Moab Brewery, but the wait went quickly and we were able to order quickly because we had looked at the menu while we waited. Jon got the fresh salmon filet – with a dinner salad, bread, vegetables and rice pilaf. He paired his with a Black Imperial Ale; he had been craving a high octane beer for the last few days, and this one delivered at 8.59% alcohol by volume. I can only guess that the Moab Brewery is able to brew extra strong beer either because it has a hard liquor license, or because this beer is not available on tap – it is served in the bottle.

I had the Greek Pasta – sautéed sundried and fresh tomatoes, Kalamata olives & spinach in garlic, basil & olive oil, tossed with penne pasta, topped with feta cheese & parsley. It was served with garlic bread. I enjoyed it with a Dead Horse Amber Ale. The brewery was packed – the service was fast and friendly, and the décor was fun. The food wasn’t outstanding, but it was good. It was the kind of place we would love to come back to.  But unfortunately we couldn’t linger long, because we had to meet our Astronomy tour guide!

Have you ever hiked to Mesa Arch or visited the Moab Brewery?  I’ll post about our Astronomy tour next!

Hunter Under Saddle circa 1990-1991. Biz was 3 (maybe 4) and I was 14 or 15. Rest in peace buddy... I'll miss you forever. April 22, 1987 - March 25, 2020. #memories #grief #goodboi #goodhorse
Cora is ready for my workday to be over!! #FridayMotivation #FridayFeeling #30MoreDays #workfromhomefail #StayHome #COVID19
I needed a little pick-me-up last week, so I picked up a spot of color during my grocery run. #Covid19usa #SocialDistancing #spring #springflowers #Daisy
I'm helping mama!! #puzzles #CatsOfTwitter #CatsOfTheQuarantine #cats #StayAtHome #StayHomeStaySafe #SocialDistancing
A pretty sunrise through the clouds this morning... #sunrise #nofilterneeded #morning #SocialDistancing #WorkFromHome #Bellingham #BellinghamExperience
Another walk on a mostly silent campus... @WWU #spring #covid19 #SocialDistancing #StaySafe #SundayMorning #SundayFunday