On Columbus Day weekend, an agent for the Federal Anti-Terrorist Task Force goes missing while on an assignment in upstate New York during a surveillance of the Custer Hill Club. 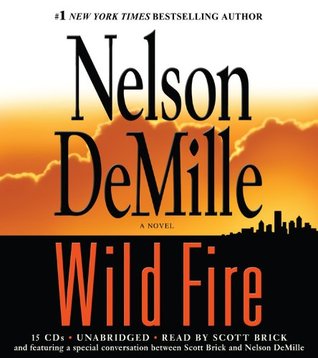 Once his boss learns about the missing agent, Detective John Corey and his wife, FBI Agent Kate Mayfield, are assigned to look into the disappearance.  Unfortunately, they are soon pulled off the case.  However, Corey and Mayfield are convinced that something fishy is going on and they aren’t willing to give up so easily in the search for their friend.

They embark on a mission to find out what happened to their friend, and to figure out what kind of secret plot is going on at the Custer Hill Club.  Will they puzzle it out in time to save lives, before their colleagues find them and pull them away from their investigation?

This was the first Nelson DeMille book that I have read, but I was intrigued by this thriller.  Set in the post-9/11 days, the plot built on the Islamic terrorism threat, but with some very fascinating twists.

I listened to the audio book version, and it was narrated by one of my favorite readers, Scott Brick.  He captures John Corey’s dry humor perfectly, and really manages to play on the relationship between John and his wife Kate.