The Columbus Affair, by Steve Berry

I’m back with another Steve Berry book, but this time from a different line of his adventure novels. 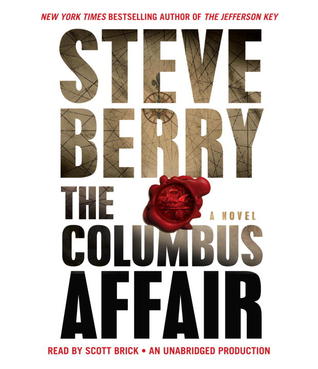 In the Columbus Affair, Tom Sagan is a former investigative journalist who was discredited as a result of a fraudulent article he wrote.  He is depressed and suicidal, until he learns that his daughter is in trouble.

Bad men are insisting that Tom exhume his father’s remains and turn over a packet of information that was buried with him, in order to save his daughter.  But what does it contain?  Tom decides he can’t just give up this information so easily, and starts to investigate to discover why they are so interested.

Tom and his daughter end up an around the world adventure looking for a lost treasure left in the New World by Christopher Columbus, that has been hidden and protected for the last 500 years by a series of guardians.  But what makes this story even more unusual is the fact that the the treasure will challenge everything we thought we knew about Columbus and his journey to discover the New World.

This book was interesting, and Scott Brick did a great job narrating the audiobook.  It was not nearly as compelling as Berry’s Cotton Malone series though.

Visited the Charles Lindbergh Boyhood home in Little Falls, MN. It's closed for the season so I will have to go back. Lindbergh lived here as a teenager and young man before his famous flights. It was built in 1907.
Went to the wildlife refuge for a walk and saw a Bald Eagle nest, with two eagles at home! Pretend it's a good photo; my cell phone doesn't do it justice. I'm planning to go back with my big camera! #baldeagle #birdsofprey #nationalwildliferefuge
Someone stole my spot... #catsofinstagram #sundayvibes #cats #snoozing
Miss Cora sunning her belly in the window for #Caturday... She's such a cute one! #catsofinstagram #cats #bellyrubs
Finished the United States of America #puzzle last night! It went quickly and was fun, but sadly it was missing 1 piece. I also learned that I am now "I need my reading glasses to read the tiny print on the puzzle pieces" years old... #Americana #relaxing #weekendvibes
Started a new puzzle last night. The United States of America. Made some good progress! I love Americana #puzzles. I need to take a photo of the box! #ThanksgivingDay #puzzletime #weekendvibes
Last of the light...
Had some ciders at Milk and Honey yesterday. They have some really delicious ones! It was a nice relaxing day.
Went for a hike in a new park today. Lots of old quarries around here that fill in with water. Very peaceful place with woodpeckers and chickadees.
Yellow is so cute all wrapped up in his tail... #Caturday #cats #catsofinstagram