A Higher Call: An Incredible True Story of Combat and Chivalry in the War-Torn Skies of World War II, by Adam Makos 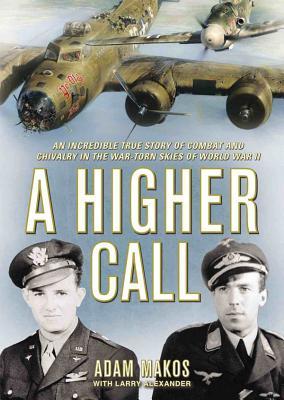 The two men’s lives intersected by chance after an American bombing raid on Germany a few days before Christmas 1943.  Both men’s lives were forever changed by a few moments of compassion shown over the skies of Germany.  Neither man could talk about the experience during the war, but each of them remembered it, and decided to try to find each other more than 40 years later.

The book shifts back and forth between Franz and Charlie’s story, detailing their experiences during their childhoods, and the war.  These stories are not for the faint of heart.  Both men witnessed, and were involved in, well, a war.  They watched men shot out of the sky, burned alive, shot while trying to escape, and saw the devastation inflicted upon the civilians in the war-torn countries of Europe and North Africa.  In a word, it was horrific, and there were multiple times I broke down in tears listening to the retelling of their experience.

If you have any interest in history, or any interest in understanding the complex experience of war, which led one man to show compassion for his enemy, you will want to read this book.