The Charlemagne Pursuit, by Steve Berry

This is another in the series following Cotton Malone, a former Justice Department agent, who owns a rare book shop in Copenhagen.  But somehow he keeps managing to get pulled back into the adventures he tried so hard to leave behind. 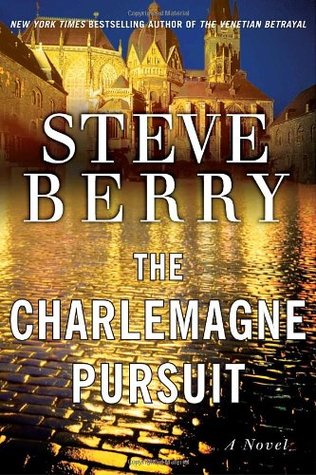 Malone brings it upon himself this time, as conversations with his son lead him into a new desire to learn the truth behind his father’s death in 1971.  He knows that he died in a submarine accident in the North Atlantic, but what went wrong?

Malone asks his former boss to get him a copy of the still classified file, which leads him on a pursuit he never expected.  His father, in fact, did not die in the North Atlantic, but instead while on a mission in Antarctica.  But why?

Malone learns that as he is trying to learn why his father died, there are powerful men who want to ensure that the secret never comes out.  His pursuit to find out the truth leads him to uncover the ancient secrets that his opponents don’t want him to know.

As usual, this is a fast paced book with several twists and turns.  Unfortunately, I feel like this novel sort of fell flat on the believability index.  It was disappointing, because I never really bought it since the story is just a bit outside of the realm of reality.  That said, it was still an interesting read.

Life on the marshmallow farm...
Last night's sunset was stunning. It was a brighter pink in real life. #sunset #sunsetphotography #shadows #landscapephotography
Today I sold the home I have lived in for the last 10.5 years. It's been a good home that put me on a solid track to my goals. Now it is time for the summer solstice to bring new dreams and new memories! #homesale #dreams #financialgoals #bigthings #summersolstice #newbeginnings
Foggy morning on the homestead... #weekendvibes #morning #fog #landscapephotography
Morning walk on the homestead... #morningwalk #flowers #homestead #spring #landscapephotography
Moody clouds on my lunch walk... #afternoonwalk #moodyskies #clouds #landscapephotography #photography
I stole my sisfur's puff last night... I get what I want... #catsofinstagram gram #cats #IgetwhatIwant
A cute painted brick from my walk up to the University the other day. #PNW #afternoonwalk #paintedbrick #streetart
Sunny mornings...
This...