B is for Burglar, by Sue Grafton

The second book in the Kinsey Millhone private detective series tells about Millhone’s search for Elaine Boldt, a well-to-do woman living in California, with a second condo in Florida.  Kinsey is hired by Boldt’s sister, who hasn’t seen her for a while and needs her signature on a form regarding the settling of an estate.  What Kinsey believes will be an easy, quick buck, turns out to be nothing but. 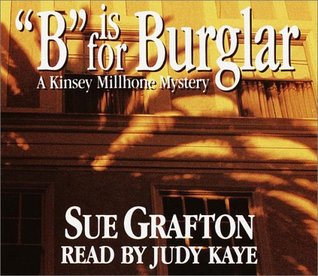 In the end, Kinsey works through a number of twists and turns, including a mysterious woman living in Ms. Bolt’s Florida condo, a fire that killed her California neighbor, and a burglar who seems intent on preventing Kinsey from finding the truth.

It was a quick read and very interesting, and Kinsey’s love interest in this book was much more subtle than the first in the series.  The audiobook reader, Judy Kaye, has a distinct voice and easy way of moving through the book, enhancing the read.