The Murder of Jim Fisk for the Love of Josie Mansfield: A Tragedy of the Gilded Age, by H.W. Brands

This book was on sale at my local bookstore a few years back and it piqued my interest…  Murder?  Romance?  The Gilded Age?  Bring it on! 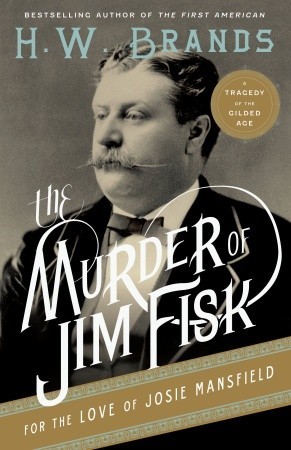 I had never heard of Jim Fisk, and you probably haven’t either.  He was a stockbroker and corporate executive, and one of the robber barons of the gilded age.  Have you heard about the 1869 Black Friday Gold Panic?  Yep, that was Jim Fisk and his business associate Jay Gould, trying to artificially manipulate gold prices, during the Presidency of Ulysses S. Grant.  Thanks to their connections to Boss Tweed, and their buying off of New York judges, they managed to avoid prosecution.

Jim Fisk was married, but that didn’t stop him from having a high profile affair with Josie Mansfield, and setting her up in an apartment as a kept woman.  All was going swimmingly, until Josie decided to leave him for another business associate of his, Edward Stokes.  The scandal escalated and eventually culminated in Jim Fisk’s murder.  But who was responsible?

Brands’ book explores the lives of the elite robber barons of the Victorian Era, as well as the corruption that was rampant across New York during the period.  It was interesting to see how the various players were tied together, and how money ruled above all else.

2 thoughts on “Book Review: The Murder of Jim Fisk for the Love of Josie Mansfield”