Meet Yellow.  Yellow came to live with me a week ago, after I managed to capture him on May 27 and made him endure the agonizing trip to the V.E.T… 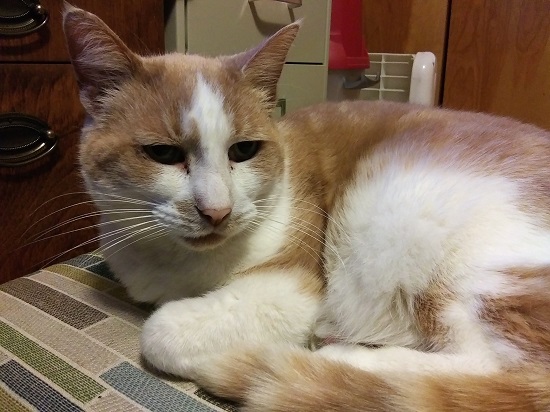 Yellow has been around outside for a few years now; my previous neighbor fed him along with a host of other feral and neighborhood cats, raccoons, deer and squirrels.  He has come over to my deck for years, where Cora got all worked up and meowed at him from her various window perches.

Sadly, my neighbor died last August and her family sold the house.  The new owners told me that the real estate agreement included a clause stating that they would continue to feed Yellow.  Instead they built a fence and got a big, energetic dog.

Yellow did what any intelligent, self-respecting cat would do; he found a new sucker.  He moved over to my house and started giving me the big, sad, ‘won’t you feed me?’ eyes.  Once I started feeding him he began to trust me and let me pet him.  So I made plans to capture him and get him checked out.  Meanwhile, Cora seemed to get used to him; she would watch him out the window, but she no longer seemed to get upset at his presence.

He has no chip, but he was neutered, so he obviously had a home at some point.  He has an abscess under his armpit, so he got an antibiotic shot to hopefully set that on the mend.  It doesn’t seem to be bothering him.  He’s doing just fine being an indoor only cat, and does not seem in the least interested in the outdoor life.  He and Cora are adjusting and there haven’t been any big squabbles, no growling, and just one hiss.  He is still wary of her, and she seems mostly interested in trying to steal his food and making sure he doesn’t steal too much of my attentions.

Yellow’s hobbies so far include: 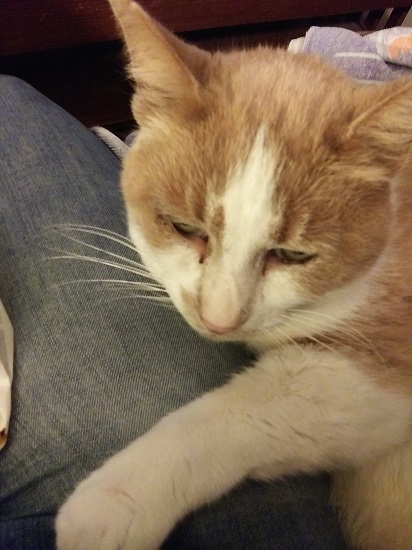 He is very friendly and very mellow; he didn’t have any objection to me trimming his claws even!  I do suspect he’s been low energy due to the fact that he got several vaccinations and his infection, so we’ll see!  Even though it has only been a week, I’m confident that he will settle in just fine…

Played around a bit with my photoball this morning at the Peter Iredale shipwreck. A wonderful subject! #photoball #photography #vacation #weekendvibes #crystal
Yesterday was my first day of my vacation. We literally had to run to catch the sunset but it was beautiful! #beach #sunset #relaxing. #vacation
Obligatory tank walk #selfie from earlier this week. #Lunchtime #walking
It was a beautiful morning for a hike at the Stimpson Nature Preserve. The woods do my soul a world of good... #hiking #girlswhohike #nature #OptOutside #PNW #summer
Waiting for the vet to open to drop the cat. Don't worry he's ok; just getting some stitches to close up a stubborn wound that won't heal. #selfie #FridayFeeling #almosttheweekend
The Runestone Museum in Alexandria, #Minnesota had an outdoor village of historic buildings, and a replica Viking ship! A Runestone was found here in the late 1800s, purporting to have been carved by Vikings exploring near here in 1362. Did the Vikings really get this far into the Americas? Since its discovery in 1898, the stone has sparked a lot of debate and claims of A hoax. It was fun trying to decide! #History #Vikings #BirthplaceofAmerica #historicsites #runestone
Out and about #selfie. Got my sunglasses fixed! #runningerrands
This morning's moody #sunrise, compliments of "the marine layer"... #landscapephotography #PNW #mornings
Last weekend I finished my latest #puzzle... #relaxing #metime
Abstract... #art #artphotographer