Rush: Revolution, Madness, and the Visionary Doctor Who Became a Founding Father, by Stephen Fried

In my quest to learn more about the Founding Fathers and the American Revolution, I checked this out on audiobook.  I had really only heard Benjamin Rush’s name, and knew almost nothing about him. 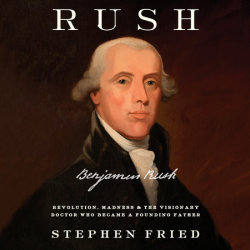 Rush had a fascinating career in several roles central to the founding of the United States.  He earned the respect of Benjamin Franklin at a young age, who helped him get into the University of Edinburgh to complete his medical degree.  He already had a Bachelor of Arts degree (earned at the age of 14!) from the College of New Jersey, which is now Princeton University.  He had also apprenticed in the medical field for several years.

Rush was a prolific writer and wrote extensively both on medical subjects and the politics of the day.  His work as a doctor for many of the members of the Continental Congress opened the door for his own election into the Congress.  He was one of the youngest signers of the Declaration of Independence.  During the Revolutionary War, he was appointed to serve as the surgeon-general for Washington’s Continental Army.  He did create some controversy, as he complained about his colleagues and wrote letters behind their backs, including letters critical of General Washington.

After the war, Rush continued working as a physician and he taught at Pennsylvania Hospital.  He was a pioneer in the fields of medical illness and addiction and was also one of the first people to discuss Savant Syndrome.  However, he was also criticized, especially in later years, for holding on to the ideas of bloodletting and the use of purgatives.

The book is a comprehensive biography of his life and explores his career, his political writings, and his relationships with friends and family in great detail.  I thought Fried did a good job balancing the positive and negative aspects of Rush’s actions and personality.  And I learned so much about this less-known Founding Father.