First of all, let me just say that I did not finish this book.  I tried.  Our library has been opened and closed over and over again due to COVID (and a bit of casual rioting but that’s a different story), and nobody else wanted to read this “masterpiece”, so I kept on trying through three standard checkout periods – nine weeks total…  I couldn’t.  So this review is based on pages 1 to 137, and a little bit of casual skimming beyond that page to see if the narrative would change (it did not). 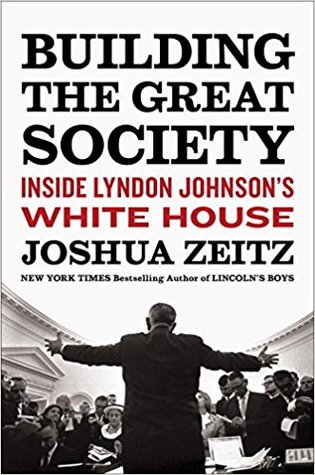 I wanted to learn more about President Johnson’s self-described War on Poverty, otherwise what became known as The Great Society.  I wanted to learn about this New Deal-esque plan to lift Americans out of poverty by the multi-pronged plan to address inequities in housing, employment, education and nutrition.  I also wanted to learn about the successes and failures of this sweeping legislation and how it has continued to shape politics and people’s lives today, even more than 50 years later.

I didn’t get any of that.  This book – at least the first 137 pages, focused on who Johnson allied with to pass his legislation, who he selected for his implementation team, and the political infighting that was rife, even at the staff level.  I learned which ill-equipped and un-remodeled buildings they were housed in, how they had to scramble to even get pens and phone lines, and how team members who should have had access to information were shut out and marginalized.

If this was interesting, it might have made up for the fact that a third of the way into the book, Zeitz still hadn’t given the reader more than headline scraps of the meat of the Great Society plan, but it wasn’t interesting.  In fact, it just frustrated me.  It reminded me that back then, and still today, politicians seem to have forgotten that we the people have elected them to work together, to find compromise, and to actually SOLVE problems.  Instead Johnson just sounds like a bastard.  And probably an alcoholic.