Sunday was a drive day, from where I had been hanging out in southwest Pennsylvania to New York.  A new state!  I had been to New York before – I took a trip to visit a friend after I graduated from graduate school with my MBA.  She was living on Long Island and working as a nanny, so we checked out Long Island, and took some trips into the city as well.  Of course, that was a few weeks before 9/11, so that gives you an idea of how long it had been since I was in New York!  17 years!

Anyway, on this trip I drove north through Pittsburgh, where the traffic was a nightmare, even on a Sunday…  It was one of the longest drives of my entire trip, spanning about 6 hours of driving. I was excited to arrive in Niagara Falls and get set up at a KOA Kampground to relax a bit.

Monday morning, I got up and was ready to visit the falls!  I had never been, but had heard so much about Niagara Falls and seen so many photos, videos and movies of them over the years!

Niagara Falls is located on the Niagara River, which empties Lake Erie into Lake Ontario.  It is actually made up of three different waterfalls; American Falls, Bridalveil Falls and Horseshoe Falls, on the Canadian side of the river.  Horseshoe Falls is technically the tallest, because it plunges 188 feet to the river below.  American Falls ranges from 70 to 110 feet.  Why the difference when they fall from the same river at the same spot?  Well, they measure the plunge, and American Falls has giant boulders at the bottom of the waterfall that mark where the measurement ends.  Horseshoe falls is also wider, at 2,200 feet wide compared to American Falls 850 feet.  Bridalveil Falls is the narrow little waterfall in between the two, that doesn’t get much of a mention.

Niagara Falls isn’t the world’s tallest waterfall by a long shot; there are over 500 falls that are taller.  It’s the flow of water over the falls that puts it into the record books.  This force and volume of water creates the roaring sound and the mist that makes Niagara Falls so impressive!  Niagara Falls was formed about 12,500 years ago at the end of the last ice age, and this force is quickly (in terms of geological events anyway) eroding the bedrock beneath the waterfall.  Since official measurements began, Niagara Falls has eroded an average of 3 feet per year, but flow control in recent years has lowered that to about 1 foot per year.  Scientists estimate that the falls have moved back along the river almost 7 miles in the last 11,000 years!

The day I visited I wandered in awe of the beauty and force of this amazing natural feature.  It was stunning, and peaceful, and yes, the volume of tourists were a bit of a distraction.  Of course I was one of them!  I wasn’t feeling well that day, so I didn’t do the boat tour, or a tour where you can walk out on a viewing platform to get covered in mist. One day I would like to go back and do those.  On my return I’ll cross over to the Canadian side and see it from that angle too.

What an incredible scenic wonder!

On my drive back to camp, I found this chimney, so I stopped to check it out.  It was built in 1750 by the French, and reused in several successive buildings after each one was burned down.  The remaining chimney was finally moved to this spot in 1898 by the Niagara Falls Power Company, to commemorate the history of the area.  It’s nice to see that they saved it!

White Trash: The 400-Year Untold History of Class in America, by Nancy Isenberg

This book was a pick from the library audiobook collection; I chose it because it was available and sounded interesting. 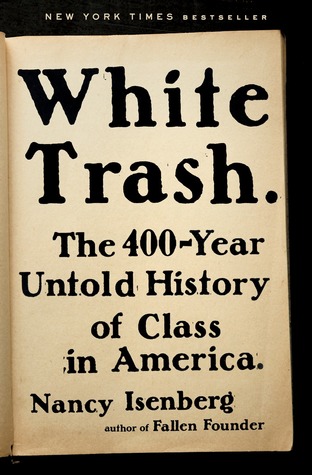 The issue of class in American has existed since the first colonies were established in the 1600s.  Indentured servants were among the very first settlers in the new British colonies, agreeing to long periods of servitude in exchange for the chance at a better life.  Sadly, the life expectancy and risk of death in the colonies meant that many, if not most, of these indentures were for a lifetime.  Indentured servitude was never as widespread as slavery in America, and as a result isn’t as widely known.

The book details issues of class in the United States from those initial colonies up to modern times, discussing the impacts that societal and governmental policies have had on the poor.  Isenberg talks about the role of class in politics, both as a way to get elected, by claiming to be a man of the people, coming up to leadership from an upbringing in poverty, and as a way to control the poor through policy setting.  Lincoln, Truman, Johnson, Clinton, and others are all Presidents who have capitalized on their poor common man roots, some more common than others.

Isenberg explores issues such as the history of words that address class, and how they have entered the modern lexicon, to issues of housing, education and entertainment in depth.  The book is largely about class, but does at times explore the intersections between class, race and religion in the U.S. as well.  It’s often not easy to separate the issues.  Isenberg presents the information in a way that is insightful, and probably as neutral as one could be.

She doesn’t offer solutions to eliminate or lessen the impact of class on social mobility, but she does bring light to a subject that isn’t often discussed or well understood.  It isn’t exactly a scholarly book, but there is a fair amount of compiled research and understanding of the last 400 years of North American history here.  Certainly a worthwhile read, especially in today’s times!